What is it that you can "buy" love at a convenience store for 3 yuan? "Tuodan Capsule" on the wall of Tuodan Convenience Store   Love is not about you can buy if you want to buy or sell if you want to sell? The popular "Sale of Love" many years ago also made many people think about whether love can be "traded".   Recently, the Chengdu Commercial Daily-Red Star News reporter learned that a "off- 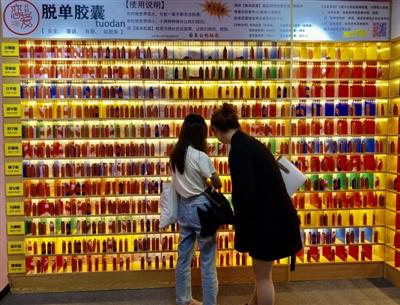 What is it that you can "buy" love at a convenience store for 3 yuan?

The popular "Sale of Love" many years ago also made many people think about whether love can be "traded".

Recently, the Chengdu Commercial Daily-Red Star News reporter learned that a "off-order convenience store" was opened in Chengdu, setting off a "love trading wave". Here, love can be bought and sold, and the price is not expensive. You can buy it for 3 yuan. "To love.

Contemporary young people refuse their parents to take their resumes to the People’s Park, but turn around and spend money to leave their personal information in the "off-the-order convenience store". What exactly does this store sell?

The owner of the convenience store is surnamed Shi, and he is called Brother Shi. This boy born in 1996 calls himself a "new age and old man".

Brother Shi told reporters that the single convenience store opened on August 14 this year on the Qixi Festival. The first customer was a girl who came in and left her personal information when she passed by.

"The business is very hot. Now it has been open for nearly a month. There are already more than 1,000 messages in the store. There are too many messages for girls, and the ratio is about 6 to 4. The ratio of the number of girls to boys is about 6 to 4. On average, nearly 100 people come to'buy' information every day, and it is full on weekends. , All come to find someone."

In the convenience store, Shi brother saw many interesting stories.

When a couple broke up and broke up, the man came to the convenience store and left his message in a capsule.

"He also specially posted a Moments of Friends, which probably means that I am single anyway, so I came to the convenience store to find someone. The woman saw this Moments of Friends and rushed to our store and asked her boyfriend’s capsule. She wants to buy out."

Some customers came to the store very generously and made it clear that they were looking for someone, but some customers were not very embarrassed.

Once, the four people in the dormitory came to the store together, but none of them wrote a message, saying it was boring, they just came in and strolled around. "But after a few days, they all came to the store and left their personal information."

Brother Shi told reporters that at present, 5 couples have been matched through a single convenience store. "Strictly speaking, there are 6 couples, but one of them broke up. The woman was from 1994 and the man was from 2002. It may be that the age gap is too large. Found inappropriate."

There are "single dogs" who focus on finding objects

There are three capsule walls in the store, which are the capsule information for post-00s, post-90s, and post-80s.

Simple information such as work location, date of birth, ideal type, etc. are written on the outside of the capsule, and the detailed information inside can be seen after purchase.

The reporter spent 15 yuan to buy 5 blue capsules on the wall behind the 90s.

Open the capsule, there is a small slip of paper inside, recording personal situation, self-introduction, mate selection criteria and other information.

The reporter added the WeChat of these boys through the WeChat account left by the other party.

Mr. Zhao, who asked not to be named, told reporters that he found the shop when he went downstairs after watching the movie.

I have been on blind date before, but he thinks that the form of taking off the single convenience store is more suitable for young people.

He has added 9 girls' WeChat accounts through the convenience store, "I met with 3 girls, one of them is quite good and I still know each other." Mr. Zhao said with a smile, "Even if it's not in love, Making new friends is also something to be happy about."

Shen Lin (pseudonym) said that when he went to the convenience store, he was mainly curious about this idea and wanted to see how the store works.

"I just want to see how he makes a profit, to find out if there is a'money route', and leave his own message by the way."

Regarding the "Tuudan Capsule", the reporter learned in the interview that some people think it is interesting and fun, while others have expressed concern: Is it illegal to exchange personal information with the Tuodan Capsule?

Or is it a problem involving the sale of information?

Lawyer Xu Bin from Sichuan Junyi Law Firm stated that regarding the issue of privacy violations, according to Article 110 of the Civil Code, the scope of civil rights includes the right to privacy, such as disclosing his name, portrait, Address and phone number.

"The Tuodan capsule described in this news is that he voluntarily paid nearly 30 yuan to the shopkeeper for his information, and he should voluntarily permit it."

"And the store's operator will provide the information that others have agreed to disclose to others in the form of a fee of 3 yuan, which should be similar to the intermediary fee charged by a matchmaking company."

Lawyer Song Hongyu of Taihetai Law Firm stated that based on the information and circumstances currently available, it does not constitute an infringement of privacy.

"The purpose of information processing is mainly blind dates, and the behavior does not violate the mandatory provisions of laws and regulations. Participants' personal information is voluntarily filled out and the purpose, method, and scope of information use are clear, which can be regarded as the right holder's explicit consent to the processing of the information. According to Article 1036 of the "Civil Code" states that for actions of handling personal information reasonably implemented within the scope of the natural person or his guardian's consent, the perpetrator shall not bear civil liability."