Ramadan in the UAE ... Compassion and authentic traditions

"Memory of the Nation" is a weekly page provided by "Emirates Today", in cooperation with the "National Archives", affiliated with the Ministry of Presidential Affairs, with the aim of introducing the way life in the Emirates before the federation, and during its early beginnings, and the great effort made by the founding fathers of the state for its establishment, and linking it to 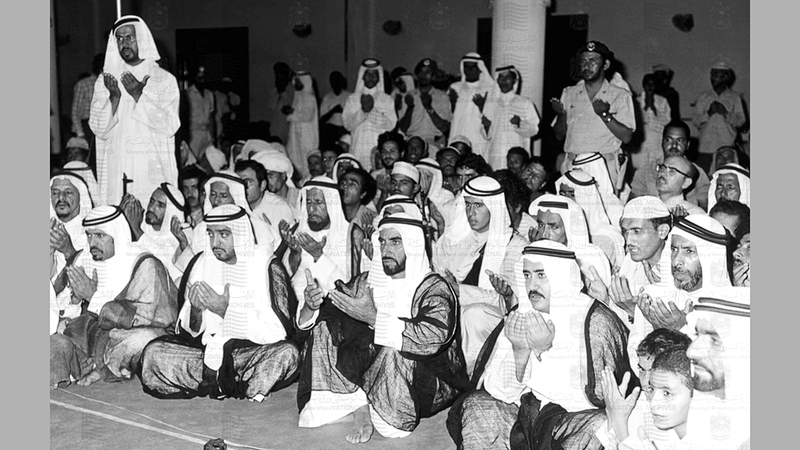 Coronavirus has transformed family gatherings into a virtual world

Ramadan in the UAE ... Compassion and authentic traditions

A weekly page provided by "Emirates Today", in cooperation with the "National Archives" of the Ministry of Presidential Affairs, with the aim of introducing the way life in the Emirates before the federation, and during its early beginnings, and the great effort made by the founding fathers of the state for its establishment, and linking it to what the UAE leaders achieve, Today, her children are among the achievements the world has witnessed.

Every year, the month of Ramadan begins, bringing with it breezes of goodness, love and compassion among members of society, and it brings back to the fore authentic customs and traditions that are still passed down to generations and adhere to them, because they have a great impact on the cohesion of society and the preservation of social relations in it.

While the month of Ramadan this year is different from the usual, the repercussions of the "Covid-19" pandemic still loom over it, forcing members of society to maintain safe distances, and to prevent gatherings and exchange of visits between families and families, in order to preserve the health of everyone, especially the elderly, as it requires. Banning the Ramadan tents, majlis, and Iftar tables that are associated with this holy month, to be replaced by virtual gatherings through visual communication.

For many years, the month of Ramadan has been associated with certain customs and rituals, which distinguished it from other months of the year, in addition to its unique spiritual and religious atmosphere.

Although the month of Ramadan has preserved this character until now, Ramadan in the past was different, in light of the lack of resources and the difficulty of life, before the discovery of oil, and the absence of modern technology, which are now used to explore the crescent, or those that are used in communication between people, which are It made the world a small village.

The investigation of the month of Ramadan in the past was taking place from the beginning of the month of Sha`ban, when people were working on preparing their needs that did not go beyond bread, flour, coffee and their requirements. Bringing these supplies required time and days on the appearance of camels, as is the journey between Abu Dhabi and Dubai or Abu Dhabi and Al Ain. And a day between the coast in Ras Al Khaimah and the villages of the tops of the mountains in the same emirate, according to what the heritage researcher Hamdi Nasr mentions in his press article, "Ramadan is a time on land and the sea ... Hatra and al-Haar."

He explained that knowing the entry of the last month of Ramadan was by the Shouf, the Eid with the calculation, and announcing it with the bonfire of the fire, the breakfast with the delivery of the sun, and the Suhur with the slap of a rooster, and most often Ramadan is 30 days, unless science comes calling: “Today is a feast .. Today's Eid is a feast, an Eid.” .

He explained that knowing the advent of the month of Ramadan in Hatra was much easier than in other regions.

In the oral history interviews conducted by the Oral History and Genealogical Studies Department in the National Archives, the narrator Bakhita Saif Mubarak Al Khaili explains the mechanism for surveying the crescent and receiving the holy month, saying: “People used to take a place where they could see the crescent, and if they did not see it they did not fast the next day. And if they see him fast, and the same applies to Eid.

And Ramadan comes during all seasons of the year.

The young boys fasted from the age of eight, nine or 10. And they were tired during their fasting, because they grazed the hosh and the hush in the morning.

Because of too much fatigue, they would lie down and sleep after they prayed. ''

Whereas, the narrator Aisha, Mr. Kamil Ahmad Al-Hashemi says: “My mother used to make the bazar (spices) by herself, wash it, dry it, and crush the bizar by herself at home, and they used to bring Salafa salt (solid salt in the form of a piece that is difficult to carry), and they remove the dust. Knife him and knock him.

They also roast coffee, pound it and make a mortar for them.

Rice was in the past (Bashawer rice).

And my mother used to make for us in those days soup and custard, and they called it (Aaroot), and they used to hold a party called the half of the month in the middle of Ramadan on the 13th, 14th and 15th days of Ramadan, and making (distributions), and some were distributing sweets for red, green and blue clothes, and « Dungo (chickpeas) toasted, nuts, gum, chocolate, and Permit (a type of candy), and mix them all, and distribute them to us.

They also distributed rice, or bread and qafi of the oven.

And there was an oven in each frij, in which they baked loquat bread

They used to bring sweets from Dubai in (Abiab), and they used to open the peppers and scoop out the sweets. ”

The narrator, Aida Muhammad Rashid Mahush Al Mazrouei, describes the rituals of the month of Ramadan among the people of righteousness, saying: “We used to sleep on the ground, hard, hot, and the water was salty. The life is for us, and they wash our clothes, while the man goes to the bush early in the morning, or he may go to the country to search for a living.

We had in the “counting” report and in the “Western atmosphere” compliant, and they used to count the days and count them since they celebrate the Eid, saying: “Al-Fitr, Al-Adha, Intrigue (Muharram), Safar, Rabi`, Rajab, Al-Qusayr (Sha`ban), and Ramadan, 12 months." .

The narrator, Saif Mejren Khalifa Al Hameli, touches on the rituals of eating, explaining: “We used to smell the smell of al-Mahalla bread and harees at afternoon time, and Ramadan had a taste in the past, and now the matter is different.

While the narrator Maryam Salem Obaid Al Kaabi says: “The men would gather to have breakfast, and the women too.

At the present time, visits have decreased in the month of Ramadan.

The woman who did not break the fast with me sent my breakfast to her house, and she sends me from her breakfast as well. ”

• “In Ramadan we smelled the smell of al-Mahalla bread and harees at afternoon time.”

• Ramadan in the past was different in light of the lack of resources and the difficulty of life.

• The breakfast table in the past reflected the simplicity of life, and there was no extravagance.

In the past, the Iftar table in Ramadan reflected the simplicity of life at that time, there was no waste or extravagance, but a great dependence on the environment and the food available in it. Therefore, the Ramadan Iftar and Suhur for most people were simple, and dates, milk or milk and water were the main elements in Ramadan food, and men often went to mosques to pray, and each of them carried a plate of food that he had at home, and after the prayer they gathered to eat together.

In addition to the main foods, families used to prepare different types of sweets, such as sako, khabees, al-asad, and luqaimat, while coffee had its special place in homes and councils.