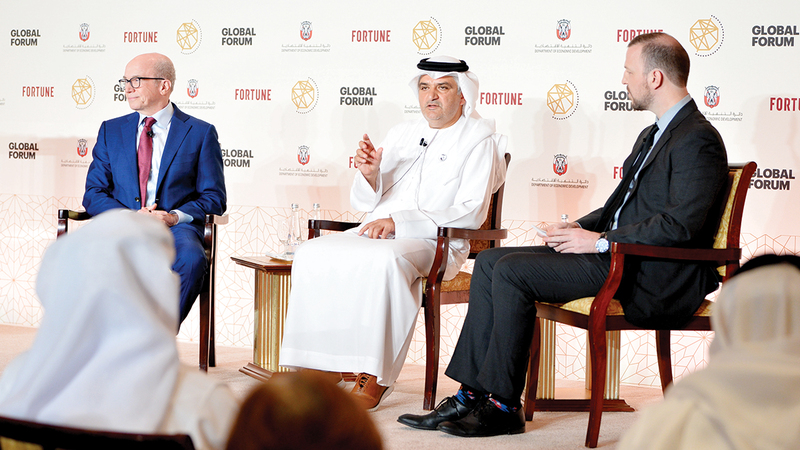 Al Balushi expressed his optimism about Abu Dhabi's economy during the year 2023. From the source

The Abu Dhabi Department of Economic Development revealed that a federal investor protection law is currently being prepared, aimed at attracting more local and foreign investments to the country.

The Undersecretary of the Department of Economic Development in Abu Dhabi, Rashid Abdul Karim Al Balushi, said, in response to a question by «Emirates Today», during a press conference to announce Abu Dhabi hosting the «Fortune Global Forum» next November, that the Investor Protection Law, which is the first of its kind in the UAE, comes Within the framework of preparing strong and solid laws that protect the investment environment in the country.

He added that the UAE issued, during the last period, many measures that protect investments, whether they already exist or are being attracted, including allowing foreign ownership of up to 100%, and many measures followed, stressing the need to protect the investor similar to the protection of the consumer that has been implemented. Issuing a law in this regard that includes protection from various unfair practices. He stressed the department's keenness to protect the consumer, while providing all the various goods and commodities in the markets.

Al Balushi expressed optimism about Abu Dhabi's economy during the year 2023, explaining that the emirate's economy succeeded in achieving growth of 11.2% during the first half of 2022, and the oil sector grew by 11.7% during the same period, with a strong push from the "industry" and "tourism" sectors. This bodes well for continued strong growth this year.

He pointed out that Abu Dhabi will host the "Fortune Global Forum 2023" next November, under the slogan "A New Era for Business", with the participation of more than 500 heads, directors and officials of a group of the largest companies in the world, to discuss economic developments in the world and the challenges facing local and international companies, and challenges The global economy, and the most prominent investment opportunities available.

He explained that the strategic and industrial policies and plans adopted by the UAE in general, and Abu Dhabi in particular, are in line with this thought, which helps decision-makers and owners of large companies to know ways to develop the global economy, each in its field, and to face various challenges such as recession risks, supply chain problems and food provision. .

For his part, CEO of "Fortune" magazine, Ellen Murray, said that the forum is holding its work for the first time in its history in the Middle East.