Chinanews.com, June 23, 22nd, FOODOM Tianjiang Food Kingdom, created by Country Garden's Qianxi Catering Robot Group, officially opened. This is the sixth robotic concept restaurant of the group, which is a collection of many stores. This new store covers an area of ​​about 2,000 square meters. There are more than 20 types and a total of more than 40 catering robot chefs. They serve nearly 200 d... 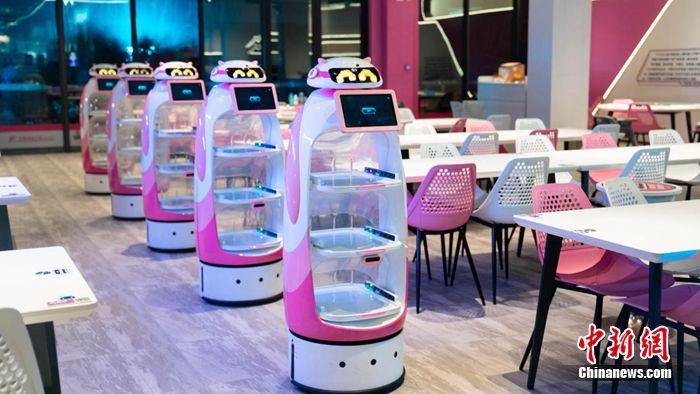 Chinanews.com, June 23, 22nd, FOODOM Tianjiang Food Kingdom, created by Country Garden's Qianxi Catering Robot Group, officially opened. This is the sixth robotic concept restaurant of the group, which is a collection of many stores. This new store covers an area of ​​about 2,000 square meters. There are more than 20 types and a total of more than 40 catering robot chefs. They serve nearly 200 dishes. Some dishes can be produced in seconds at the fastest time, which can provide a visual feast of visual and taste buds to nearly 600 guests at the same time.

Unlike ordinary restaurants, this is a flagship restaurant that integrates Chinese food, hot pot and fast food. The food served by the restaurant is controlled by the robot "cook", and the reception, ground delivery and other services are also completed by the robot.

For Country Garden, Tianjiang Food Kingdom is not only the flagship restaurant of the robot restaurant, but also the centralized display area of ​​the group's scientific and technological achievements. More than 20 of the latest food and beverage robots independently developed by them are here. On the same day, the second-generation claypot rice robot and mini ice cream robot independently developed and produced by Qianxi Group were the first to obtain China's first system integration catering robot CR (China Robot Certification) certificate issued by the National Robotic Testing and Evaluation Center, opening up the industry First of all.

On the one hand, the CR certificate represents the official recognition of Qianxi catering robot by the national authority, on the other hand, it also shows that Qianxi Group is in a leading position in the catering robot industry. Jiang Junxian, president of the China Culinary Association, said, "The new crown epidemic has caused consumers to pay more attention to food safety, nutrition and health. This will force the catering industry to pay close attention to the close cooperation of all links and the coordinated development of the entire industry chain. The industry will pay more attention to the dining environment. Scientific, reasonable and comfortable."

Relevant person in charge of Qianxi Group revealed that on the basis of traditional manual cooking, robot standardized cooking can make the quality of the dishes produced more stable, solve the problems of unstable quality and large differences in taste, and also improve the production speed and production efficiency. In the future, the Group will lay out in more cities and regions, and is committed to creating a global smart dining giant with technology, health, experience and taste. More importantly, in the post-epidemic era, meals provided by contactless machines are more in line with people's demand for health.

Aiming at the 5 trillion catering market

People take food as the first priority, and the catering industry will still be an important force to form a strong domestic market and unleash the potential of domestic demand. According to the National Bureau of Statistics, the revenue of my country's catering industry reached 467.1 billion yuan in 2019, an increase of 9.4% over the previous year. With the resumption of production and production in an orderly manner after the epidemic, and further release of household consumption, it is expected that the scale of my country's catering market will exceed 5 trillion yuan in 2020.

However, China's catering industry is a "big market and small industry". The industry concentration is extremely low, and the technological progress is slow. The operation method is still at the ancient manual operation level. Therefore, the traditional catering industry is still a labor-intensive industry, facing the challenges of gradual increase in labor costs, high staff turnover rate, and low management efficiency, and urgently needs to be transformed and upgraded.

On this level, Country Garden is destined to subvert the catering industry as soon as it calls out the slogan "Robot cooking". In the Tianxi Food Kingdom of Qianxi Group, more than 20 catering robots such as wok robots, claypot rice robots, noodle robots, etc. independently developed by the group were displayed at the "post", providing nearly 200 kinds of dishes, Achieve instant meals in as fast as 20 seconds.

Specifically, 14 devices, such as a cloud-rail system for delivering food, a hamburger robot, a single-arm frying robot, and a welcome robot, have achieved rapid iterative upgrades based on previous restaurants. The upgraded robot is more stable and efficient. For example, the transfer capability of the second-generation hot pot dual-arm meal-taking robot has increased from 400 dishes per hour to 850 dishes per hour in the first-generation hot pot robot; and for example, the second-generation burger robot has increased the meal-out efficiency to 20 seconds per meal, which is faster than current fast food The dining efficiency of industry giants (about 30-40 seconds/piece) is nearly doubled.

At the same time, Tianjiang Food Kingdom has introduced more new faces. For the first time, it has launched 7 new robotic new devices such as crayfish robot, noodle robot, breakfast robot, and coffee robot, which greatly enriched the quantity and efficiency of restaurant dishes. For example, the breakfast robot realizes the cold storage, baking of noodles, and the automatic sale of the insulation of soy milk and eggs, with a meal efficiency of 6-10 seconds per serving. The coffee robot realizes fully automatic unmanned functions such as coffee making, ice adding, and automatic meal making. Personalized coffee can be customized according to the needs of diners. The efficiency of meal making can reach 45 seconds per cup.

In addition to opening a robot restaurant, Qianxi Group has also actively expanded and discovered more market possibilities, and has been widely concerned and recognized by the market and the industry.

Also on the 22nd, Qianxi Group and Beijing Beichen Industrial Group Co., Ltd. (abbreviated as "Beichen Group") announced that they will launch a comprehensive strategic cooperation around the smart catering supply of all conference centers under Beichen. For example, the second phase of China National Convention Center built by Beichen Group will be put into use in 2022, and Qianxi Group will also be stationed simultaneously. The center will be used as the main news center and international broadcasting center for the Winter Olympics. Qianxi Group will provide 24-hour smart catering service here to show media workers from more than 200 countries and regions around the world the perfect integration and leading application of smart technology and Chinese food culture.

Qianxi Group said: The future business layout will mainly focus on three aspects: one is to supply catering robot stand-alone equipment, which is widely used in public areas such as hotels, scenic spots, hospitals, communities, schools, office buildings; the other is to open FOODOM robot restaurant offline. The three main business states are Chinese food, fast food and hot pot; the third is to provide an overall solution for the intelligent transformation of traditional catering spaces, such as government agencies and large enterprise canteens. Through the simultaneous layout and advancement of the three fronts, Qianxi Group will strive to build one of the world's largest catering companies.

The greater significance of the robot restaurant is also to promote the upgrading and transformation of the catering industry through technological innovation, and to actively move towards intelligence. Since 2016, my country has successively issued a series of special robot support policies, through strategic guidance to further implement "intelligence +" to promote intelligent technology to enable high-quality economic development.

When the tide of technology is rolling in, the most traditional and ancient industry, catering, is inevitably facing upgrades and changes brought about by new technologies. Academician Zhao Chunsheng of the Chinese Academy of Sciences commented: "The Qianxi robot restaurant has innovatively realized the integration of software and hardware, and the integration of man and machine, which has better achieved the accuracy of motion, smooth operation, and diversity of layout in the actual application of robots. The robot industry has the most advanced technology, the most complete format, and the richest products. It not only fills the gap in the industry in many aspects, but also has benchmarking significance and research value."

It is foreseeable that in the future, the catering industry will accelerate its transformation in the direction of supply-side digitization, business model upgrade, smart catering retail, and refined operations. Due to the slow technological update in the catering industry, the emergence of robot chefs can be called a revolution in the catering industry. "China Robot Industry Report 2019" disclosed that the global robot market in 2019 is expected to reach US$29.41 billion. At present, China's robot market is developing rapidly. In 2018, the scale of China's service robot market has exceeded the ten billion mark, with a growth rate of about 30%, which is significantly higher than the growth rate of industrial robots.

As a subdivision of service robots, the demand for catering robots is also on the rise, with safe and contactless services, electronic traceability of the entire process of food production and processing, high efficiency of meal service, 24-hour operation, intelligent integrated management of the entire system, etc. Advantage.

At present, intelligent management methods such as cooking robots, food delivery robots, and fully self-service unmanned service restaurants have a series of applications and landings in catering services. Companies represented by Country Garden are actively transforming traditional catering production methods and operating models on the exploration road . The opening and operation of many robot restaurants in Country Garden demonstrated to the world the superiority of robots in cooking dishes, and also demonstrated the rapid development and progress of China in the field of catering robots to the world.

On the 22nd, after the second-generation claypot rice robot and mini ice cream robot developed and produced by Qianxi Group took the lead in obtaining the CR certificate, the director of the Technical Committee of the National Robot Testing and Evaluation Center (Headquarters) and the National Robot Standardization General Group Testing and Certification Working Group Chief Zheng Junqi said: "Qianxi Group won the first CR certificate for system-integrated catering robot, which is the first in the industry and has three main values. First, product quality meets the requirements of product specification design, basic safety requirements, and food safety requirements. The requirements of national certification; secondly, provide equipment purchasers with confidence, help products get more effective domestic market recognition, and then enter the international market; third, standardize the domestic market, escort the use of robots in the food field, and make equipment use Fang is more at ease and consumers are more at ease."

At present, robot catering is still a brand new attempt, and there is no mature path to learn from. Therefore, on the basis of increasing the technical opening and updating, Qianxi Robot Group has continued to promote the formulation of industry standards. In May this year, the National Robotic Testing and Evaluation Center and other units, together with Zhiyuan Technology, a subsidiary of Qianxi Group, jointly released the "Technical Specifications for the Safety Certification of Robotic Systems in the Food Field", which is the first technical specification in the field of food robots in China.