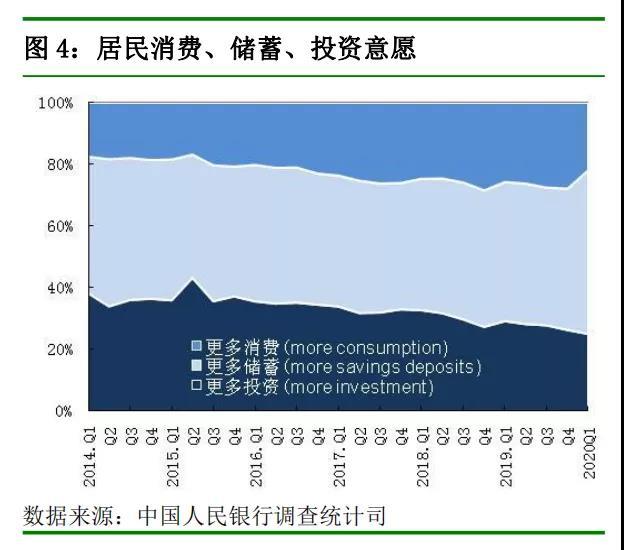 China News Service Client, Beijing, April 29 (Reporter Li Jinlei) There are two sets of data recently, which make everyone feel that retaliatory consumption has not yet come, and retaliatory saving comes first.

Let's look at another set of data that has already occurred.

Household deposits increased by 6.47 trillion in the first quarter

What is the concept of an increase in household deposits of 6.47 trillion? This means that in the first quarter, an average of more than 70 billion deposits flocked to banks every day!

Such "spectacular" data makes the central bank have to sigh: it shows that the savings held by the people are relatively thick.

The rapid growth of resident deposits in the first quarter, as well as the substantial increase in the willingness to save in the future, made the friends exclaim: retaliatory consumption has not yet begun, and retaliatory savings come first.

Why did the retaliatory savings come first?

"Now that the market is in a downturn and investment is not optimistic, it is better to deposit money in a bank insurance point."

"The most important reason is that people are affected by the epidemic and have an unknown and panic about the future. They dare not spend money and are unwilling to spend money."

On social media, netizens have heated discussions about retaliatory saving.

"Our company's welfare has been cut, and I asked my friends in the surrounding area. There are really a lot of salary reductions. After reading the bank deposits, I feel quite insecure." Yang Xuan, who works in Beijing, told a reporter from China News. Then you can't spend money arbitrarily, save more, just in case.

Why did everyone start saving money?

First, consumption has fallen and expenditure has decreased.

Affected by the epidemic, it was impossible to go out to eat, drink, and play, consumption dropped sharply, and the money saved had to be saved.

According to data from the National Bureau of Statistics, total retail sales of consumer goods fell by a nominal 19.0% year-on-year in January-March, and per capita consumption expenditure of residents nationwide actually declined by 12.5%.

The second is Jiji to prevent hunger and preventive savings.

Zhao Xijun, deputy dean of the School of Finance and Economics of Renmin University of China, analyzed to reporters from ChinaNews.com that the Chinese people have the traditional concept of “jiji valley preventing hunger”, and the concept of savings is deeply entrenched. Pressure, unstable future income expectations, and increased sense of crisis. In order to protect future life, many people have increased their awareness of saving money and began to increase savings and reduce expenses.

"The epidemic may have a strong uplifting effect on preventive savings." Pan Xiangdong, chief economist of New Era Securities, believes that whether it is a natural disaster such as an earthquake or flood, or a public health event such as a plague, it will affect people's consumption psychology. Make an impact. Disasters can cause dramatic fluctuations in future income and expenditure. In order to have more resources for themselves and their families to deal with this uncertainty, people will cut consumption and increase preventive savings in case of unexpected needs.

The third is risk aversion and investment return.

Zhao Xijun analyzed that the increased risk in the investment market and the rise in risk aversion have also allowed many people to convert investments into deposits, and return liquidity funds such as stock markets and wealth management products.

"As soon as the epidemic began, my family cleared the wealth management products, all of which were stable and changed to structured deposits, fearing risks." Some netizens said. Cash is king and holding money is a common mentality of most people in the first quarter.

How can we stimulate retaliatory consumption?

Zhao Xijun believes that under the epidemic situation, in order to promote consumption, we must find ways to enable residents to consume, dare to consume, and willing to consume. First of all, we must stabilize employment and ensure income, so that residents can have money to consume; secondly, social security must be carried out, so that residents have no worries, and do not dare to consume because they are worried about unemployment and illness; The price is stable, allowing residents to dare to go out to the restaurant; they can also take measures such as issuing coupons to stimulate consumption.

Recently, many places have announced the issuance of different forms of consumer coupons to boost consumer confidence.

A research result released by Guanghua School of Management at Peking University on the 27th shows that consumption vouchers have a significant effect on stimulating consumption. The government's 1 yuan subsidy for consumption can bring an average of more than 3.5 yuan in new consumption. New consumption is not "consumption in advance" As a result, there has been no significant decline in consumption return to normal after consumption coupons. It is recommended that large-scale consumer coupons with a write-off amount of 500 billion yuan be issued nationwide.

So the question arises, under the stimulus of consumer coupons, will you retaliate to consume or retaliate to save money? (Finish)