Wild animals in Beijing: How to build a "protection net" for biodiversity?

China News Service, Beijing, May 22 (Xu Jing, Chen Hang) In 2012, in a wildlife survey conducted in Beijing, the staff found 41 first-class national protected animals - black stork and 11 in Shidu area of ​​Fangshan. A black stork nest.   In the past ten years, Beijing, represented by the flagship species of the black stork, has strengthened the construction of wild animal habitats and comprehe 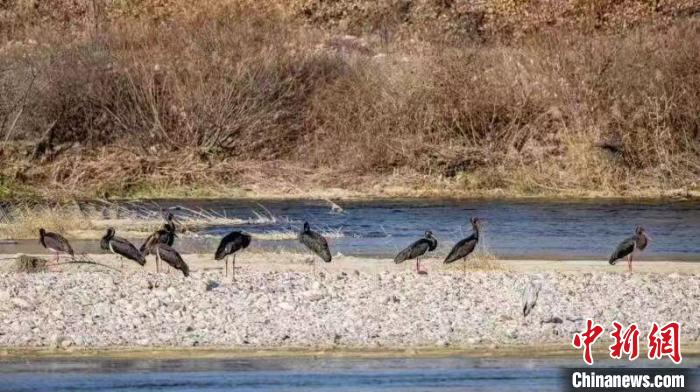 In the past ten years, Beijing, represented by the flagship species of the black stork, has strengthened the construction of wild animal habitats and comprehensively protected wild animal resources.

The black stork, which originally used Fangshan as a transfer station for migration, became the "master", and the population grew to more than 100, and flew out of Fangshan to settle in other areas of Beijing.

Today, at least 596 species of terrestrial wild animals thrive in the capital's 16,400 square kilometers of land, including more than 500 species of wild birds.

Beijing, one of the most biodiverse metropolises in the world, is building a new environment for the wild animals living here through scientific habitat restoration and construction, wildlife monitoring and rescue, and strengthening law enforcement. Solid and reliable protection net.

The quality of Beijing's ecological environment has continued to improve, and it has now become one of the most biodiverse metropolises in the world.

17 newly recorded species in Beijing were recorded in the field.

"The variety and quantity of wild animals are increasing, which reflects the continuous improvement of biodiversity protection and wildlife protection in Beijing in recent years," said Zhang Zhiming, director of the Wildlife and Wetland Protection Department of Beijing Landscaping Bureau, in an interview. , in the "Beijing Terrestrial Wildlife Catalog (2021)" (referred to as the "List"), it can be seen that Beijing has achieved good results in the protection of wildlife and biodiversity in recent years.

Among these 596 kinds of wild animals, 126 are included in the "National Key Protected Wildlife List", including 30 national first-level key protected wild animals such as black stork and brown horse chicken, and second-level national key protection such as leopard cat and mandarin duck. 96 species of wild animals.

Zhang Zhiming said that due to the limitation of the inclusion standards of the "List", the 596 species of terrestrial wild animals are conservative data, and there will be more species of wild animals in Beijing.

Creating the environment: "Why are the wild animals in Beijing home?"

Various protected areas for wild animals and plants have won Beijing the favor of birds and many other animals.

Up to now, Beijing has established 79 nature reserves of various types and levels, effectively protecting more than 90% of national and local key wildlife and habitats.

Zhang Zhiming introduced that the establishment of nature reserves in Beijing dates back to the 1980s.

After 40 years of development, Beijing has formed a total of 79 nature reserves in five categories, including nature reserves, scenic spots, forest parks, wetland parks and geoparks, with a total area of ​​about 22% of Beijing's territory.

"These protected areas are mainly based on the need for strict protection such as important ecological functions, sensitive ecological environment or rich biodiversity." He said that through the establishment of protected areas, the protection of natural ecology can be achieved. , conservation of natural resources, protection of biodiversity and geological and landscape diversity, maintaining the health and stability of natural ecosystems and improving ecosystem services and other functions.

He said that the Beijing landscaping department is currently in accordance with the national unified deployment to further optimize and integrate these natural reserves. He believes that in the near future, Beijing will provide better habitat conditions for wild animals.

The picture shows the mandarin ducks found in Beijing.

Taking the Yanqing District of Beijing as an example, in 2020, the first wetland nature reserve in Beijing, the Yeya Lake Wetland Nature Reserve, innovatively established a bird food source - bird food field in the bird's concentrated foraging area. Plant corn, sorghum, soybeans and other crops that birds like for their enjoyment. In this grain field "just ask about the cultivation, not the harvest", the maximum number of gray cranes observed in that year reached 5,000; on February 5 this year, On the first day after the opening of the Beijing 2022 Winter Olympics, a large number of gray cranes were photographed in the nature reserve circling the snowy trails of the Yanqing Winter Olympics, presenting a spectacular picture of "Hexi Winter Olympics".

Since 2005, Yanqing has monitored the national key protected wild animal Great Bustard every year, with a maximum of 7 being monitored at a time; in 2021, 13,000 mallards were observed in the Yeya Lake Wetland Nature Reserve, gathering on the lake. Spectacular.

Thanks to the protection measures adapted to local conditions, the species and numbers of wild birds in Yanqing have also increased.

The species of wild birds in the region increased from 233 species in 2005 to more than 390 species, and birds such as the great bustard and red-crowned crane, which are the national first-class protected wild animals, frequently appeared.

The data shows that Yanqing has become one of the ecological conservation areas with the richest biodiversity in Beijing.

Embrace the change: the suburban ecosystem is becoming more and more perfect

In ecological conservation areas, natural reserves provide a free world for wild animals; in urban areas of Beijing, with the effects of air and water quality control, wild animals can also be seen in parks in the bustling city.

In April this year, citizens were pleasantly surprised to find tadpoles swimming in the pond in the Olympic Forest Park, and it became a reality to "listen to the sound of frogs" in the urban park.

"Amphibians are an important indicator of the quality of water quality in a place," Zhang Zhiming said. Since amphibians have bare skin and live directly in the water, water quality has a great impact on them. This is also the reason why frogs are hard to hear in urban parks. important reasons.

However, as various departments in Beijing have attached great importance to the work of ecological protection in recent years, the water quality of the parks in the city has improved a lot compared to before.

"If the number of frogs increases, reptiles such as snakes will also increase. The more species that coexist, the more stable the food chain will be, the more perfect the ecosystem will be, and the healthier the ecological environment will be." He said that in recent years, Beijing is still in related areas. Small and micro wetlands have been added to provide multiple guarantees for the survival of wild animals.

The "Beijing Wetland Protection and Development Plan (2021-2035)" shows that by the end of the "13th Five-Year Plan", the total area of ​​wetlands over 400 square meters in Beijing has reached 58,700 hectares, accounting for 3.6% of the city's total area. There are more than 10 forest wetlands.

In addition, Beijing will improve the wetland landscape, increase the leisure space and places for citizens to enjoy water and experience nature, improve the livability of the capital city, and enhance citizens' sense of green acquisition and happiness.

In addition to the natural environment suitable for survival, there are also "hard" guarantees for wild animals living in Beijing.

The new version of the "Beijing Wildlife Protection and Management Regulations" implemented in 2020 includes both wild animals and their habitats under the scope of protection, and clearly stipulates a global hunting ban and a comprehensive fasting to provide legal protection for wildlife protection; the "Beijing Wildlife Protection Regulations" implemented last year City Wildlife Protection Management Law Enforcement Coordination Mechanism, and cooperate with more than 20 relevant departments to create favorable conditions for the precise crackdown on rectification of illegal and criminal acts that destroy wildlife resources.

Zhang Zhiming told reporters that with the implementation of the "Regulations on the Management of Wildlife Protection in Beijing", more and more citizens are paying more attention to wild animals.

In 2021, the Beijing Wildlife Rescue Center will receive rescue services from citizens and law enforcement agencies such as public security, confiscated 3,157 wild animals of 252 species, and released 1,283 wild animals of 114 species.

In order not to let citizens who protect wild animals suffer, Beijing formulated and implemented the "Beijing Measures for Compensation for Losses Caused by Key Protection of Terrestrial Wildlife in Beijing" in 2009. Over the past ten years, more than 50,000 farmers have been compensated, accumulatively The compensation amount is nearly 30 million yuan.

This policy has made outstanding contributions to Beijing's wildlife protection and safeguarding the safety of people's lives and property, and has effectively promoted the harmonious development of humans and wild animals.

In 2021, the national second-level key wild protected animals, Chinese goral and leopard cat, will appear many times in Yanqing.

But with the increase in the number of leopard cats, wild animals have also caused losses to some residents.

In response to the above situation, Yanqing completed 15 townships and 175 administrative villages last year, involving more than 2,500 damaged households, the loss verification work, and the compensation amount was about 2.5 million yuan. , Yanqing folks lost less."

It should be reminded that not all wild animals need rescue.

For example, some young birds practicing flying in the wild can wait for the parent birds to take care of them if they fall outside the nest, and do not disturb them.

Zhang Zhiming mentioned that it is difficult for such young birds to survive in captivity.

He also reminded citizens who go to the mountains to play in the mountains, in order to reduce the risk of getting lost, try not to go to the wilderness area when going out, and reserve enough space for wild animals.

In addition, it is necessary to reduce loud noises and avoid "shouting mountains" in the wild.

If you encounter wild animals, don't feed them, keep enough distance from them; don't lure or chase wild animals to reduce their impact.

May 22 marks the 29th International Day for Biological Diversity, and this year's theme is "Building a Shared Future for All Life".

Zhang Zhiming said that in the next step, the Beijing Landscaping Bureau will increase the public awareness of wildlife protection through science popularization while increasing technical research, and improve the efficiency of wildlife rescue.

"We also encourage citizens to report the destruction of wildlife resources, and jointly create a beautiful Beijing where people and nature live in harmony." (End)