His name shines in the firmament of French haute couture. Passed away in 2008, the couturier Yves Saint-Laurent is currently celebrated in six museums in Paris on the occasion of the 60th anniversary of his... 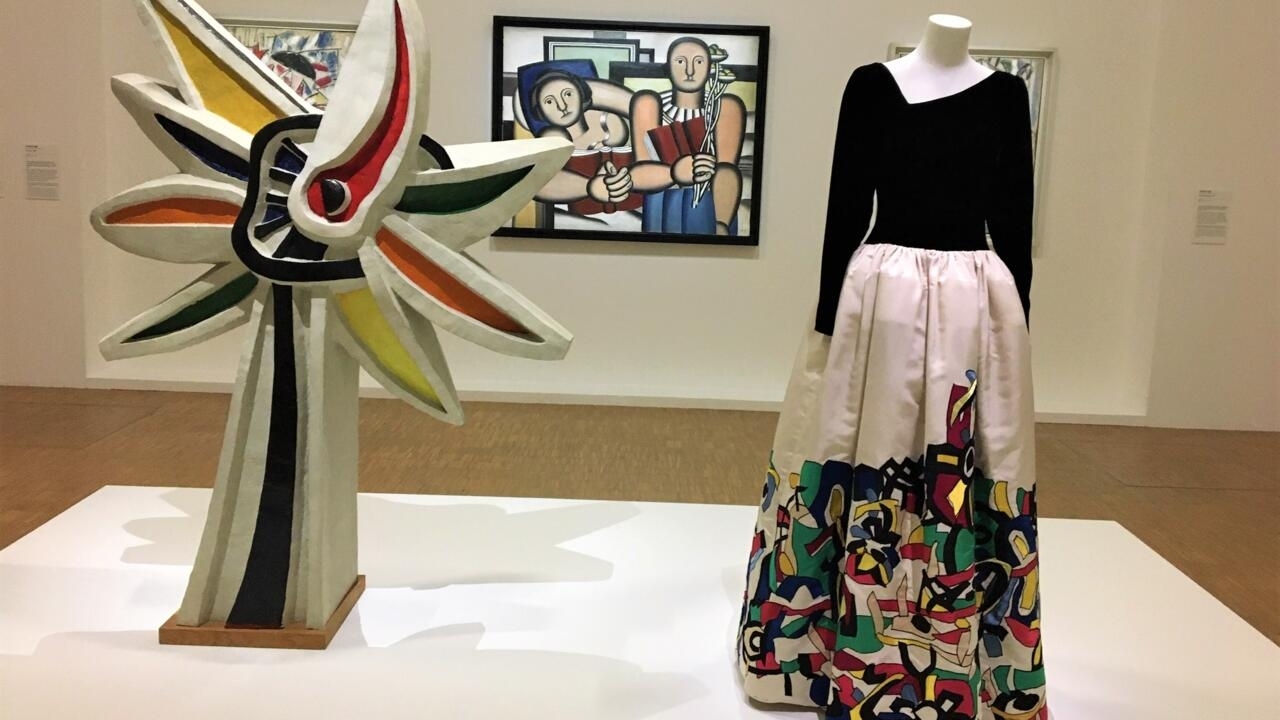 Creation by Yves Saint Laurent in homage to Fernand Léger 1981 fall-winter collection, next to the polychrome flower (1952) by Léger.

His name shines in the firmament of French haute couture.

Passed away in 2008, couturier Yves Saint-Laurent is currently celebrated in six museums in Paris on the occasion of the 60th anniversary of his first fashion show.

Several events or stagings show the links that the designer has forged throughout his life between fashion and art.

Exhibitions to see at the Center Pompidou, the Musée d'Orsay, the Louvre, the Picasso Museum, the Museum of Modern Art.

The Yves Saint-Laurent museum, located on avenue Marceau in the mansion that housed the fashion house, presents 340 sketches by the master.

Twenty years ago, Yves Saint-Laurent, the most artistic of French couturiers, presented his last fashion show in Beaubourg.

In his fashion house created in 1962, he never ceased, throughout his collections, to maintain a dialogue with art: painting, sculpture, literature, theater or cinema fed his imagination and his creations.

It now enters the museum, further recognition of its creation as a national heritage.

This love for art, Yves Saint-Laurent had satisfied it in his passion for collecting, a passion shared with his companion, Pierre Bergé.

The couple had built up an eclectic collection in the designer's famous studio at 55 rue de Babylone in Paris.

Works from Antiquity, but also from Japan or Morocco, cubist or abstract canvases including three paintings by Mondrian, echoing the couturier's famous dress in ecru wool jersey inlaid with black bands, rectangles, red, yellow and blue, from the 1965 autumn-winter collection.

Yves Saint-Laurent had archived all his production during his lifetime, at a time when fashion was not supposed to pass on to posterity.

The Bergé/Saint-Laurent couple, as soon as they had the means, kept the memory of the entire creative process: original drawings, workshop sheets, jewellery, patterns, embroidery, photographs.

Like this selection of Polaroids, testimony to each complete outfit from her fashion shows, to be seen at the Center Pompidou.

Saint-Laurent draws and has an immense talent as a colourist, which he perfected in Morocco where he imagined all his collections, daring to combine bold colours, orange and purple, blue and green, pink and orange.

1966 will be a pop year, 1967 an African year, with the so-called “Bambara” collection that Yves Saint-Laurent signs a year after the World Festival of Negro Arts launched by Senegalese President Léopold Sédar Senghor in Dakar and Paris.

At the Center Pompidou, Mouna Mekouar, curator of these six exhibitions, and curators Christian Briend and Marie Sarrey, revealed Saint-Laurent's interest in Africa.

The coat in red raffia and wooden beads, reminiscent of Dogon ritual clothes, dialogues with André Breton's cabinet of curiosities, the black dress with a conical chest in organza embroidered with plastic beads coexists with the

by the sculptor Alberto Giacometti .

Apart from Oran in Algeria - where he was born - and Morocco - his refuge from the 1960s - the couturier has never set foot elsewhere in Africa.

Yet he admires its shapes and silhouettes.

The first object purchased for his private art collections will be a Senufo bird from Côte d'Ivoire, a symbol of fertility.

Yves Saint-Laurent is inspired by Matisse, Warhol, Léger... At the Center Pompidou, the couturier's Romanian blouse is exhibited right next to the painting by Henri Matisse that bears the same name.

At the Picasso Museum, the couturier borrows from the cubist aesthetic of the great master, eternal games of construction and deconstruction.

In 1979, Saint-Laurent devoted a complete autumn-winter collection to the Spanish painter, such as this dress which takes up the asymmetrical faces in the painter's eye.

Another tribute is this jacket embroidered with sunflowers, borrowed from Vincent Van Gogh's spring-summer 1988 collection.

At the Louvre, in the Galerie d'Apollon, the works of art department of the largest museum in the world houses the Crown diamonds.

Four embroidered jackets rival the goldsmithery of the place, including the famous

in rhinestones, a brooch worn by one of its models during each fashion show.

At the Museum of Modern Art in Paris, around twenty pieces by the couturier are displayed.

Three dresses in front of the huge

Tribute to Yves Saint Laurent at the Musée d'Orsay with a staging of dresses by Jane Birkin and Mme de Rothshild worn during a "Proust" ball in 1971. © Isabelle Chenu / RFI

The work of Marcel Proust,

were the bedside books of Yves Saint-Laurent.

The Musée d'Orsay, Musée des Impressionnistes, has chosen the Salon de l'Horloge to exhibit the dress worn by singer and actress Jane Birkin in 1971 for a "Proust" ball, as well as that worn by Baroness de Rothschild.

They cohabit with different tuxedos for women, reinvented year after year and iconic pieces from the couturier.

A garment that transferred the codes of male power to women.

," said Yves Saint-Laurent in a press interview in 2000, acknowledging that he drew from the greatest artists of his time.

These haute couture "touches" signed Saint-Laurent exhibited in the permanent collections of major Parisian museums remain a delicate exercise as it is difficult to present a garment without a moving body.

Without any accessories, on minimalist mannequins, the outfits nevertheless exude an ageless force that undoubtedly has to do with art.