Hot search on "Alien Girl" Is this the "Guangdong Women's Guide" from 30 years ago? 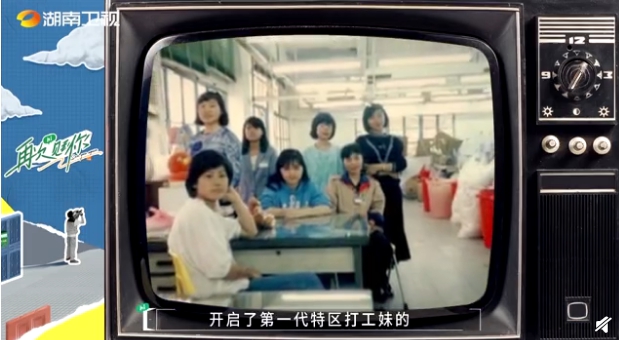 Hunan Satellite TV's program "Meet You Again", revisited Zheng Yanping, one of the prototypes of the hit drama "Alien Girl".

Thirty-nine years ago, 18-year-old Zheng Yanping went to Shenzhen with more than 80 sisters and became the epitome of the first generation of migrant girls in the special zone.

In the program, Zheng Yanping revealed that at that time, she could earn 1,000 Hong Kong dollars a month, and for the first time felt that "hands and feet are meaningful".

She sighed. Fortunately, she had some ideas at the time. She came to Shenzhen and got on the high-speed train for the development of the motherland.

The show fragments caused heated discussion on the Internet.

Some people are inspired by it, as long as you persist, everything is possible.

"Foreign Sisters" was first broadcast in 1991. The play tells the story of six young men and women who went to work in Guangdong from a small mountain village in the context of reform and opening up.

New opportunities have changed this group of young people. The fate of the characters in the play and the changes of the times have also left a deep impression on the audience and inspired many brave hearts.

"Alien Girl" became a national sensation after the broadcast, and the heroine Chen Xiaoyi quickly became popular with this drama.

Thirty years have passed. Why is this "Foreign Girl" about the lives of the previous generation still outdated?

"We were moved by them, and created in the spirit of realism."

In order to better represent the working girl, he and the screenwriter specially went to the town and township joint ventures in Dongguan to experience life. It took half a year.

Cheng Hao said: "Those girls will take the initiative to chat with me and invite me to drink tea. This is how many stories are told. Almost every heroine in "Alien Girl" can find a prototype in life."

A good work should be in sync with the times.

Recording and witnessing the changes of the times, this also determines the vitality and meaning of "Alien Sister".

Although the influence is not as great as before, it can still inspire many people.

Some media have commented that "Foreign Sisters" is not outdated. Apart from artistic reasons, the subject matter and ideological connotation are very important. How do Chinese find their place in cultural conflicts? This is a problem for alien girls, and almost everything. The problem of the Chinese.

In fact, from the perspective of the core of the story, "Alien Sister" is not outdated.

To describe it with today's words, this is a career drama where a female protagonist engages in a career.

Six young men and women, including Zhao Xiaoyun, Yulan, Fengzhen, and Pretty Girl, came to Guangdong to work for food and clothing.

Foreign girls face the outside world and make different choices.

Some were fired for clumsy hands, some married locals, some fell into the dust, and some returned to their hometowns and couldn't adapt to the old days of their hometowns, so they went south to work again.

The winner in life is the heroine Zhao Xiaoyun. Because she doesn't want to be a teacher like her father, she wants to change her destiny through part-time work.

She was smart and capable, and she was appreciated, all the way from the assistant to the stretch, and then became the production supervisor.

But in life, Zhao Xiaoyun was once perplexed by the "emotional investment" of manager Jiang Sheng, but fortunately he was reined in the precipice.

At the end of the story, Zhao Xiaoyun resigned, determined to be self-reliant, set up a factory for the township government and served as the factory director.

Although the education level is not high and the job position is low, the working girl in the play bravely pursues her dreams and fights for her own life. The heroine Zhao Xiaoyun has become a representative of self-reliance in that era.

Today, some netizens commented that this is the "Guangdong Women's Guide" 30 years ago, showing the true power of women.

In the past two years, female-themed film and television dramas have become popular, and the plight of female groups has attracted attention.

But there are also some film and television dramas, just under the banner of women, either sell anxiety, or itchy or not, or change the soup without changing the medicine "Mary Su".

Suspension, pseudo-realism, and everyone has the rich, has caused many viewers to suffer from "irritation".

Society is developing, and the story of the female community is also changing.

Although "Foreign Sister" is classic, it also hopes that more good film and television dramas will appear to take care of social life and broaden the breadth and depth of realistic themes.