Toilet paper bunkering, home office in bathrobe and endless team meetings. With the Quarantine Diary, cartoonist Elin Lucassi captures life during the pandemic year 2020. - This year has been so heavenly long, she tells Kulturnyheterna. 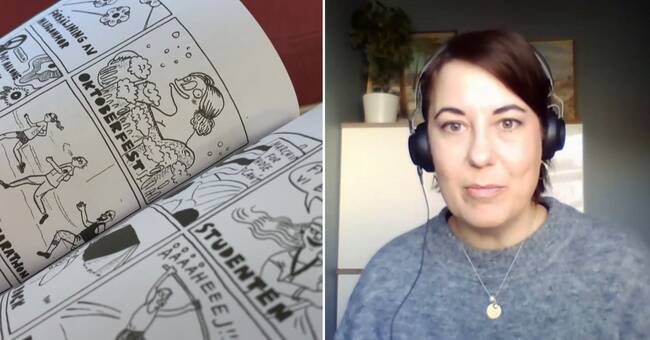 When the authorities last spring called on the Swedish people to work from home, cartoonist Elin Lucassi decided to document the new life.

- I quickly realized that it would not work to take notes and then when this is over do some of it.

It went super fast that things got mixed up, she says.

The quarantine diary depicts the eventful year 2020, the reactions of the outside world and the little life inside the home walls.

A way to remember

For Elin Lucassi, the daily cartoon became a way to hold on and remember the events and happenings that quickly disappeared.

- It has been BLM, a speech from our Prime Minister to the nation that everyone listened to.

A Palm investigation - I had completely forgotten that, she says.

The comic book diary draws the comic in the new life with all the behaviors and phenomena that arise.

But there are also serious lines here.

Each chapter begins with a black page filled with a specific number of skulls representing the varying death rates during the past year.

But according to Lucassi, the book is not about the corona or the disease that is spreading, but about the universal.

- It is about humanity, relationships, psychology, group behaviors and emotions.

It's easy to think of it as a nightmare book about the time of the plague.

But there is quite a lot of humor in it, says Elin Lucassi.