Weather: Snow and ice cause accidents on the roads

After the snow chaos of the past week, road users still have to be prepared for snow, drizzle and black ice - there were several ice accidents during the night. The frosty days are over for now. 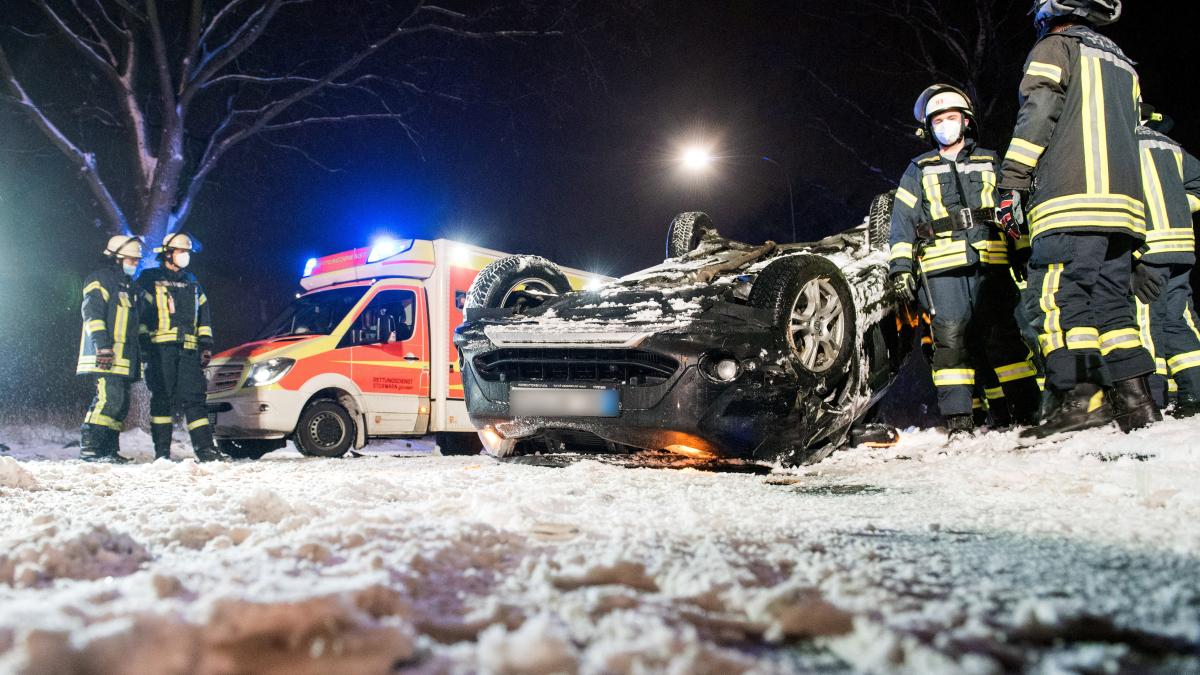 On Tuesday morning, drivers and pedestrians have to be prepared for difficult road conditions, black ice, rain and snow.

For Tuesday night, the German Meteorological Service in Offenbach expected freezing rain or drizzle with black ice on Monday evening in the east and south.

The police stations reported some ice accidents during the night, but there was no snow chaos like last week.

For the east and southeast, some snowfall was initially expected, which should quickly turn into rain and subside in the course of the morning.

The frosty days are over for now.

The reason is the foothills of a strong Atlantic depression, which gradually brings in warmer sea air.

In the north in particular, snow and slippery roads severely hampered traffic on Monday and Tuesday night.

In several parts of Lower Saxony there were accidents caused by the ice.

The A7 was closed for some time in the evening from the Göttingen junction to the Göttingen service station in the south direction.

The gritting vehicles of the highway maintenance department were in constant use, as the police announced.

Fatal accident in the Heidekreis

The A21 near Bad Oldesloe in Schleswig-Holstein was also blocked during the night.

A truck had parked itself there and blocked both lanes to the south.

A police officer was injured in a car accident on the A10 in the Oberhavel district of Brandenburg.

In the evening after a slippery truck accident he had removed barriers and was hit by the car.

A 54-year-old driver from the Heidekreis was killed on the B71 between Hemslingen and Brockel.

According to previous knowledge, a 29-year-old lost control of her car in the afternoon when freezing rain started and got onto the opposite lane.

The woman was admitted to hospital with serious injuries.

A series of accidents in the Hessian town of Niedernhausen (Rheingau-Taunus-Kreis), on the other hand, turned out to be mild: an ambulance crashed into a parked car on a smooth road surface.

The fire brigade called in and a gritter slipped and also crashed into vehicles at the scene of the accident.

There were no injuries in the accident, the police estimated the property damage at 211,000 euros.

In and around Hamburg, as well as in Kiel, heavy snowfall in some cases confused the rail and local public transport.

In Hamburg, the main train station was temporarily closed on Monday evening.

“Long-distance trains are being held back until further notice.

There are stops and train cancellations, ”tweeted Deutsche Bahn and advised travelers to plan more time and check alternative routes.

Shortly after 9 p.m., a railway spokesman said traffic was normalizing, but individual trains were still delayed.

"As soon as the road situation allows, the buses will run again," announced the company.

Freezing rain made the streets as smooth as glass, said the transport company.

In addition, the overhead lines of the trams were covered with an ice sheet within a few minutes.

The trams therefore stopped at the stops, and the buses headed for the depot for safety reasons.