"DP World Group" has completed tests of container storage on raised pallets, which bears the name "Box Bay" system, in the first full-size facility that was set up in Jebel Ali Port. And it stated in a statement, yesterday, that at the beginning of this year, the completion of Executing more than 63 thousand 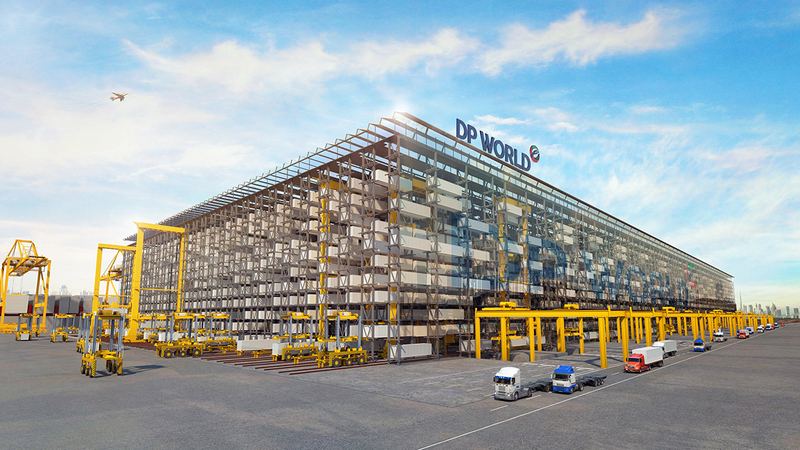 And it stated in a statement, yesterday, that at the beginning of this year, more than 63,000 container movements were completed, since the trial operation of the facility, which can accommodate 792 containers at one time, stressing that the "BoxPay" system showed greater speed and better efficiency in Energy consumption, higher than expected.

According to the group, this promising system is the result of a joint venture between the DP World Group and the German "SMS" group, and works to store containers on high floors of up to 11 floors on steel shelves.

This system has a capacity that exceeds three times the capacity of conventional container terminals, as it allows containers to be stacked directly on top of each other, thus reducing the space of the terminals by 70%.

Also, in the "Box Bay" system, containers are moved in and out, and between their places on the shelves, by means of fully electric automatic cranes integrated into the structure.

Sultan Ahmed bin Sulayem, Group Chairman and CEO of DP World, said: “This test proves that Box Bay can revolutionize how ports and container terminals operate. To significantly increase capacity, raise efficiency, and make container handling more sustainable,” he said, pointing out that the “BoxPay” system is part of DP World’s vision to apply innovation to enable global trade, and make it a global provider of smart logistics solutions.

For his part, BoxBay Chairman and CEO, Matthias Dubner, said: “This innovative and revolutionary technology will not only increase the handling volumes at the berths and increase the capacity of container storage, but will also allow the partners to take another step towards Achieving sustainability, as power generation and solar panels on the roof help reduce carbon dioxide emissions to a minimum.”