CaixaBank closes an agreement with the unions that involves 6,452 exits, 1,800 less than initially proposed

After two days of marathon meetings, the CaixaBank management and the unions representing the workforce yesterday approached positions regarding who is going to be the biggest ... 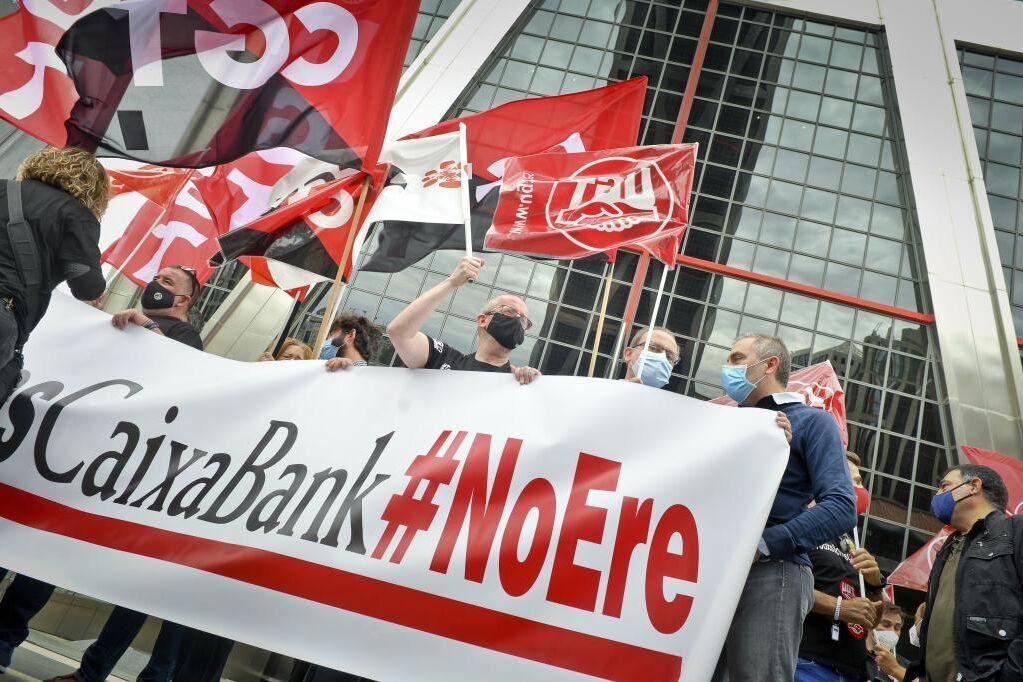 After two days of marathon meetings, the CaixaBank management and the unions representing the workforce yesterday approached positions regarding what is going to be the largest ERE in the history of banking in Spain and one of the largest collective dismissal processes of Spanish business history.

The bank had ceded numerous positions in the last days of negotiation before the deadline given to reach an agreement expired this Wednesday.

The first was to reduce the number of people affected by the ERE by 22% compared to the first figure put on the table of 8,291 employees.

Finally, the number of extinctions will be

The departures will be given both to central services, with 862 affected workers, and the network of offices, territorial addresses and central services distributed, with 5,419 departures (1,286 in Madrid, 528 in Barcelona and 461 in Valencia).

Another of the key elements on which the negotiations revolved was the so-called "forcefulness", that is, the bank's ability to directly fire certain employees. Finally, voluntariness will predominate, although a series of age quotas will be established so that the adjustment is distributed among the different generations of employees in the bank.

This point had become the great stumbling block that prevented the pact between bank and workers. The financial group established in its last proposal that the exits were voluntary, as long as the range between 54 and 55 years was limited to 1,750 exits and that of 52 and 53 years to a maximum of 750 workers. The unions are opposed to signing this agreement, understanding that it implies forced departures in other sections that will not obtain such a juicy compensation for leaving the entity.

CaixaBank management has also had to give in to the limitation of early retirement, which initially had limited to 58 years and finally will be extended to employees up to 52 years born in 1969. The measure represents an 'amendment' to the reform of pensions that today the President of the Government, Pedro Sánchez, will sign with the social agents and that foresees a hardening of early retirement to bring the real retirement age closer to the 66 years established by the legislation.

Another of the obstacles to the negotiation was that the unions refused to accept that, exceptionally, the entity can transfer a maximum of 200 workers to a distance greater than 100 kilometers from their current job to cover an exit. For unions, this mobility may mean that a worker has to change his job to another city more than 100 kilometers away and, "if he does not accept, he goes to the street." Finally, the entity proposed limiting geographical mobility to a maximum of 75 kilometers when necessary for its restructuring plan and as a measure to maintain employment.

The negotiation of the bank and the unions has been strongly conditioned by the successive interference of the Government, which represents the 16% public participation that the State has in the bank's capital after the recent absorption of Bankia.

The adjustment has been analyzed internally in the internal management bodies of the group and, from outside, there have been frequent messages sent by the Vice President of Economic Affairs, Nadia Calviño, anticipating an agreement between management and unions.

With this tailwind, the union committee that brings together more than a dozen formations has intensified its pressure in recent days with the calling of two general strikes in the financial group -the first in its centennial history- and obtaining numerous progress at the negotiating table.

CrisisCompetencia revolts against the pressure of the bank for the file of ICO guarantees: "There are e-mails"

EconomyCircle of Economy: from Sitges to Barcelona to escape the? Davos effect?

and reinforce the role of Spanish cocapital