Chinanews.com, November 25th. The 3-hour direct air transport, a fresh journey that spans time and distance, once again confirmed the original intention of Bright Dairy. The high-quality raw milk from Ningxia Zhongwei Golden Milk Source Belt is directly delivered to Shanghai by air in 3 hours, and is made into a special Zhongwei Milk Source version "Ube Fresh Milk" to give back to consumers for 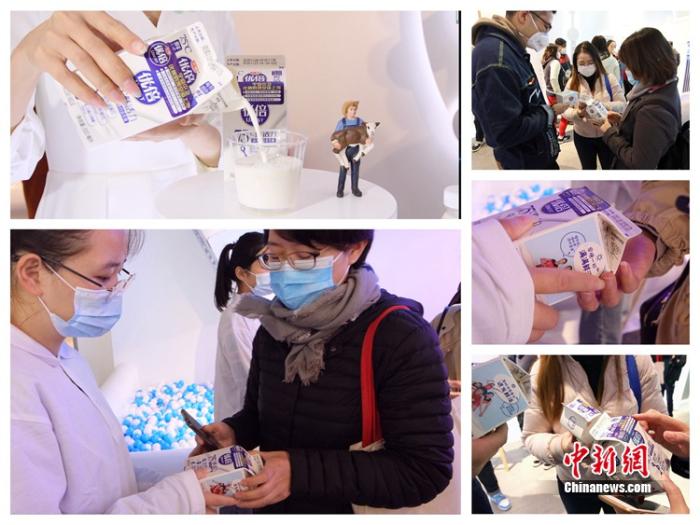 The high-quality raw milk from Ningxia Zhongwei Golden Milk Source Belt is directly delivered to Shanghai by air in 3 hours, and is made into a special Zhongwei Milk Source version "Ube Fresh Milk" to give back to consumers for free.

From November 24th, Bright Dairy will distribute freely at the same time through Guangming Xpress APP, 2 Guangming You Bakery stores, and 8 Milk Shed stores. It is worth mentioning that, in order to lead domestic dairy companies to communicate and advance together, Guangming Dairy has a " On Nanjing Road Pedestrian Street, known as China’s No. 1 Commercial Street, many dairy companies within the United Nations have worked together to create a "live fresh milk experience store", aiming to convey to more consumers "fresh pasteurized milk is healthy With the fresh concept of "good milk", consumers can taste the best fresh milk products brought by many dairy companies across the country in the store. This special edition of Zhongwei milk source "Ubei Fresh Milk" is also among them.

Many citizens and friends came to wait in line after hearing the news, grab the "fresh" and enjoy the golden milk source with fresh milk at home.

This time, Bright Dairy started the first domestic air transportation of milk sources. Will this become a new trend in the development of fresh dairy products in the future?

It has to be said that as a century-old dairy company with freshness as its core strategy, Bright Dairy's ultimate pursuit of freshness has played a pivotal role in leading the high-quality development of the domestic dairy industry.

In response to the call to open up the internal economic cycle of the domestic economy, from the west wing to the east wing, Bright Dairy has opened up an aerial high-speed for the pursuit of "freshness": let the high-quality milk source go to the whole country, and let the desert milk enter the East China Pearl, the world-recognized golden milk Yuandai meets the world's leading Shanghai manufacturing technology to create world-class fresh milk.

Tan Zhenghua, deputy director of the Agriculture and Rural Bureau of Zhongwei City, introduced: “Ningxia Zhongwei has a dry climate and sufficient sunshine. It is located in the upper reaches of the Yellow River. The quality of forage and water is relatively good. The raw milk protein rate is 3.2-3.3%, and the milk fat rate is 3.4-3.8. %. It is a world-recognized source of high-quality gold milk. The main quality and hygiene indicators are better than the domestic average and reach EU standards. The daily output of raw milk in Zhongwei City, Ningxia reaches 1,000 tons, while the local dairy companies consume about 200 tons a day and the remaining 800 tons It is transported by vehicles to other cities, most of which are made into room temperature milk.” Bright Dairy focuses on high-quality milk source belts, and hosts the local cooperative farms in Zhongwei, Ningxia. Through high-end farm management technology and optimized feed ratios, the local farms are single-headed. The milk production of dairy cows has increased by 4 kg, and the purchase price of raw milk has increased by RMB 0.3 per kg.

Bright Dairy has opened up the internal economic cycle of the domestic economy, improved the milk production of local dairy cows and the quality of raw milk, and at the same time increased the income of local herders, boosting the upgrading and development of Ningxia's superior dairy industry.

Adhering to the pursuit of fresh quality, Bright Dairy has penetrated into the golden milk source belt of Zhongwei in Ningxia, repeatedly scrutinized transportation details, successfully broke through the limitations of time and distance, innovated the conventional transportation of fresh milk, and became China's first domestic milk transportation by air. The company that produces fresh milk products has opened a new era of fresh milk manufacturing.

Bright Dairy has innovated the air-freight source model of milk, and contributed to the local opening up and high-quality economic development.

Zhongwei City in Ningxia has been plagued by sandstorms for a long time in history. The control of deserts and the rational use of deserts have always been the bottleneck of local industrial development.

The mobile sand dunes tens of meters high in the past have been renovated, and the barren sandy land has been transformed into a "cow paradise". The desert pasture uses the characteristics of dry desert climate and less disease to develop the dairy farming industry. The cow dung from cattle is treated and used. In order to improve the desert land and plant forage grass, a circular industrial chain in the desert oasis has been formed.

After a small snowfall, the small cows in the Calf Island area of ​​the Guangming Dairy Zhongwei Cooperative Ranch were quietly looking out in their "little villas", and the breeders poured fresh milk that they had just squeezed out one by one. After that, they will go through a rigorous selection process before they can officially start milk production.

Manager Yang Wenjie, manager of Guangming Dairy Zhongwei Ranch, said: “Bright Ningxia Zhongwei Ranch’s sanding and breeding operations on dairy cows can effectively inhibit bacteria. Cows can lie down for 14 hours a day, effectively suppressing the incidence of mastitis. The water permeability and drainage are very good, which has greatly helped dairy cows to control diseases, reduced the fall of dairy cows caused by walking, and steadily increased milk production. On the other hand, the pasture will also recycle sand , The dust and sand are repeatedly used after disinfection and sterilization to strengthen the local ecological civilization construction of environmental protection."

Made in Shanghai and high-quality milk sources complement each other. Bright Dairy transcends the limitations of time and distance and only provides consumers with a cup of real high-quality fresh milk.

Bright Dairy empowers the high-quality development of fresh territory through front-end construction, concentrates on building a "leading freshness" force, boosts the economic development of western my country, and guarantees the strategic layout of national milk sources.

In insisting on quality, we will witness every "bright" quality lifestyle with consumers, so that more people can feel delicious and healthy.