"Warnews. Information in war": the days of the Morrione Prize are back in Turin

From 26 to 29 October, also online, 18 appointments with the participation of 75 speakers The days of the Roberto Morrione Prize for investigative journalism are back in Turin and online from Wednesday 26 to Saturday 29 October . 18 appointments with the participation of 75 speakers, expert people from the world of journalism, university, communication and civil society. The theme The Amici di Roberto Morrione association has chosen as this year's theme " WarNews. Information in war 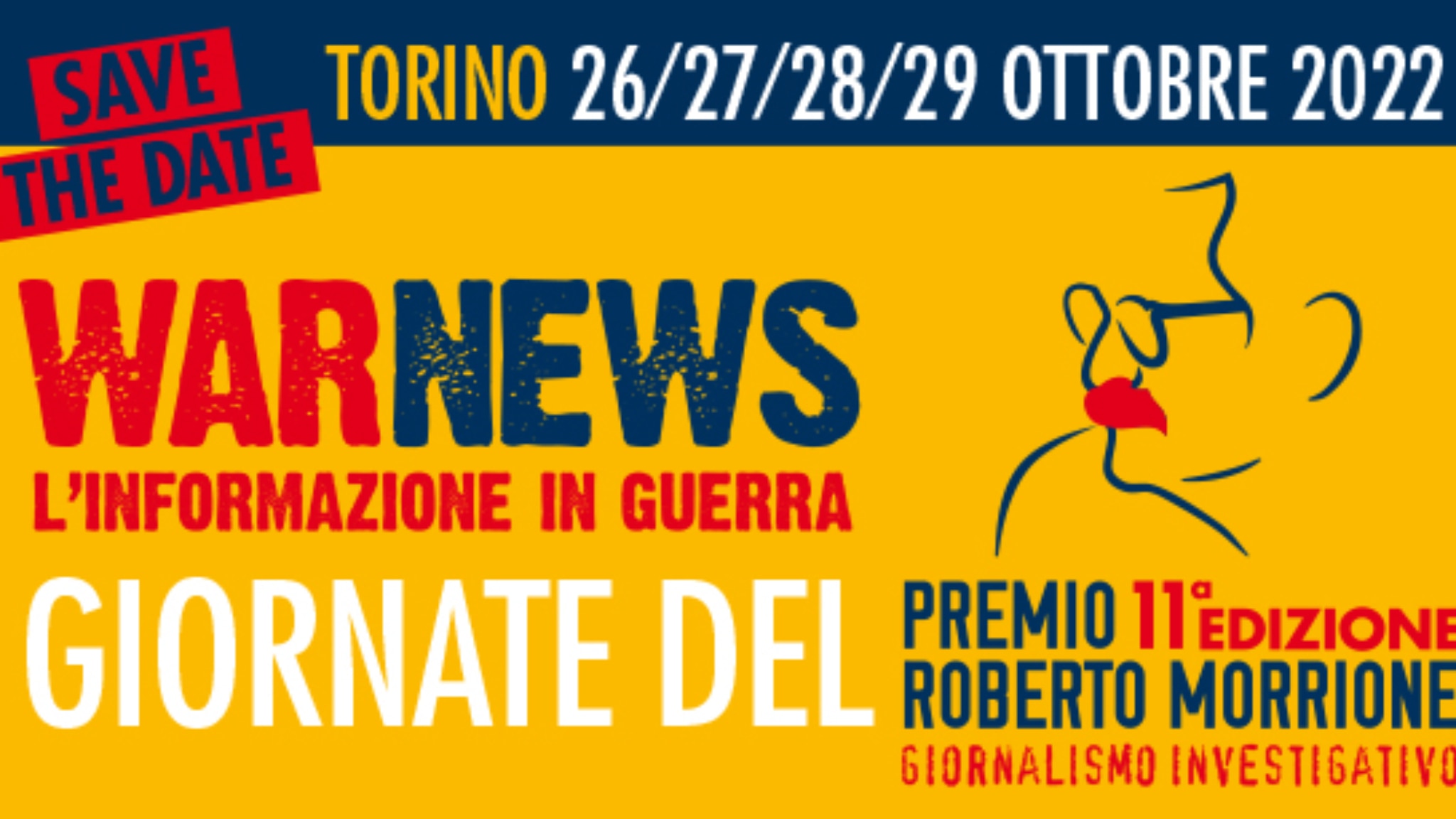 The days of the Roberto Morrione Prize for investigative journalism are

back in Turin and online

from Wednesday 26 to Saturday 29 October .

18 appointments with the participation of 75 speakers, expert people from the world of journalism, university, communication and civil society.

of meetings, projections and debates to analyze the role of information in the current context, between wars, crises, known and forgotten conflicts.

“We find ourselves today in the midst of an armed conflict in Europe that threatens nuclear disasters.

Talking about "Information in war" was an obligatory, almost obvious choice, but no less necessary for this.

We wanted to do this by calling all those involved to reflect, starting from the envoys, protagonists of the news from the battlefields, up to the students, the first generation, from the times of World War II, who find themselves dealing with the threat of a global conflict, which risks mortgaging their future ”explains

After months of work and silence, the finalists of the eleventh edition of the Morrione Prize will be presented as a national preview during the days.

It will also be possible, during the four days, to preview them and exclusively by registering on the Prize website.

The organizers have decided to involve the young people of Turin more and to reserve the first presentation of the surveys to the high schools of the city.

Thanks to the collaboration with Libera Piemonte, therefore, the authors of this edition will meet the students and will compete with their works for a new recognition, entitled

, assigned by young people to the investigation they deem best. .

To make the days more inclusive, interpreting in

of the afternoon and evening events on Friday and Saturday at the Circolo dei Lettore and the most awaited evening, the award ceremony, on Saturday 29 October in OGR.

The interpreting service will be provided by the National Deaf Organization and the Segni di Integrazione Piemonte cooperative society.

"Baffo Rosso" and "Witness of the Award"

will receive the Baffo Rosso 2022 Award, while the Witness of the Roberto Morrione 2022 Award is awarded to

, a journalist of Who has seen Rai3.

On Friday 28th and Saturday 29th October an exhibition of photographs and mini-documentaries by Francesco Zizola will be set up at the Readers' Club.

It begins with the awards ceremony of the sixth edition of

The winner of the competition talks with

SEI - School of Entrepreneurship and Innovation

, on the theme "Businesses, people and ideas: the story of a growing ecosystem".

Three initiatives are planned in collaboration with

: the first, at the Fabbrica delle “e” in Corso Trapani 91 / b, where the finalists and finalists of the Roberto Morrione Prize present their inquiries to the students of the High Schools of Turin.

The event is coordinated by

, general secretary of the Roberto Morrione Prize, and opens with greetings from

, journalist of Will Media,

, journalist, writer, juror and winner of the Roberto Morrione Prize;

The words to tell the present.

The day opens with two live broadcasts of Radio Rai: at 8.30

, spokesperson for the Award, and the finalists take part in the Radio Anch'io broadcast of Rai Radio 1 conducted by Giorgio Zanchini;

at 10.00 instead the whole city talks about it on Rai Radio 3 conducted by

9, three meetings are held: the first, “Kabul, the return of the Taliban” with

, researcher, freelance, traveler, will talk with

the second debate follows, “Afghanistan-Sri Lanka: conflicts between repression and distraction”, with

, freelance journalist, director of Radio Bullets, and the coordination of

, full professor at the University of Padua,

, journalist and scholar of Media and Democracy.

, journalist of the Reform, spokesman for the Circolo Articolo 21 Piemonte.

At the end of the meeting

, journalist and documentary maker, and

, president of the Casale Monferrato Asbestos Victims Family Association, and

From 17.00 to 19.00 the last meeting of the afternoon entitled "The wars of Assange" is held with speeches by

, president of the Order of Journalists,

, coordinator of the My Voice Committee for Julian Assange, and with the special participation of

, journalist and Guarantor of the Articolo21 association.

Led by Giulia Bosetti, journalist of Presadiretta Rai3 and member of the board of the Morrione Prize.

The work will resume at 9.00 with the meeting "The legal boundaries of and in armed conflicts: mines, bombs, remains, trials" with

, associate researcher SOAS (School of Oriental and African Studies) of the University of London.

This is followed by the panel "From Guantanamo to Yemen: the wars continue" with

, reporter, director of the publications of the Catholic University School of Journalism in Milan.

, journalist of Report Rai3 and deputy director of the ass.

At 3.00 pm the meeting "RAI and the new information challenges" opens in the afternoon with an interview by

, president of the Center for books and reading, with the CEO of Rai

takes part in the meeting .

, journalist of Who has seen it?

Rai3, and the photographer

are the protagonists of the panel "Witnesses of our time".

Following the finalists and finalists of the eleventh edition of the Roberto Morrione Prize will present their five surveys (three videos, one radio - podcast and one multimedia).

The 2022 tutors will participate in the presentation:

, president of the Center for books and reading.

We then move on to OGR Torino, Corso Castelfidardo n.

final evening of the awards ceremony

The evening is conducted by

, president of the Center for books and reading, and on the stage there will be: the finalists, the finalists and tutors of the Roberto Morrione Prize,

, researcher of the Pavia Observatory and coordinator of the Charter of Rome,

, spokesperson for the Friends of Roberto Morrione association,

, director of the Nev news agency and spokesperson for the Circolo Articolo 21 Piemonte,

, director of Rai for Sustainability - ESG,

, president of the Piedmont Order of Journalists,

The musical interventions will be by rapper

will read some texts by Roberto Morrione.

During the awards ceremony, the five special cartoons drawn by

for the Roberto Morrione Award will be shown, one for each finalist survey.