The Russian Foreign Ministry has made strong accusations to the United Nations over the worsening security crisis related to the Ukrainian Zaporizhia nuclear power plant, and warned that the world is "on the verge of catastrophe". 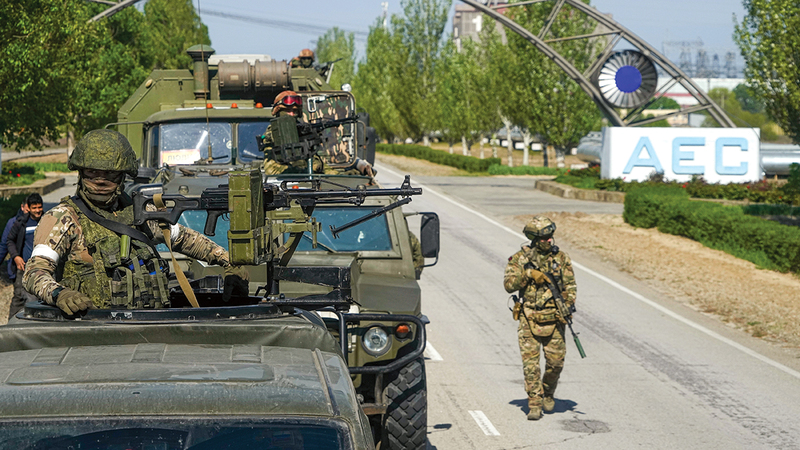 She warned that the world was "on the brink of catastrophe"

A Russian military convoy on the road to the Zaporizhia nuclear power plant.

The Russian Foreign Ministry made strong accusations to the United Nations over the worsening security crisis related to the Ukrainian Zaporizhia nuclear power plant, and warned that the world was "on the brink of catastrophe."

Kyiv and Moscow accuse each other of bombing the site, amid mounting fears of a catastrophe.

"In the United Nations Secretariat, which is looking at problems related to nuclear energy, including the consequences of technical disasters and related issues more broadly, they must realize that the world is on the brink of disaster," Zakharova said.

The Russian Foreign Ministry had already complained, in a statement yesterday, about the cancellation of a visit by representatives of the International Atomic Energy Agency to the station, due to security concerns raised by the United Nations Secretariat.

Russia has called for a special meeting of the UN Security Council today, Thursday, during which IAEA Director Rafael Grossi is scheduled to brief the council on the situation at the nuclear plant.

On the other hand, Ukraine accused Russia yesterday of exploiting its position at a nuclear power plant it had seized and targeting a nearby town with a missile attack that killed at least 13 and seriously wounded many more.

Marganets, which Ukraine says has been targeted by Russia, is a town Moscow says has been used by Ukrainian forces in the past to bomb Russian forces holed up at the Zaporizhia nuclear power plant, which Russia seized in March.

Yesterday, the foreign ministers of the Group of Seven major industrialized countries demanded that Russia immediately return control of the station to Ukraine, something that Moscow is unlikely to do.

Moscow says it does not intentionally target civilians in its own military operation in Ukraine, which aims to preemptively protect its security against NATO expansion.

Andriy Yermak, chief of staff of Ukrainian President Volodymyr Zelensky, accused Russia of launching attacks on Ukrainian towns from the Zaporizhia nuclear power plant, knowing that his country would not respond because the response would be dangerous.

"Eighty rockets were fired at residential buildings," Yermak wrote in a post on the Telegram messaging service, referring to the attack on Marganets.

Ukraine says about 500 Russian soldiers, backed by vehicles and heavy weapons, are stationed at the nuclear plant, where Ukrainian technicians continue to work.

Russia says its forces act responsibly and do everything in their power to ensure the safety of the facility.

Valentin Ryzhnichenko, governor of the Dnipropetrovsk region in central Ukraine, said yesterday that the Russian attack on Marganets was carried out using 80 Grad missiles.

He added that more than 20 buildings were damaged in the town on the other side of the Dnipro River, from the power plant.

He added that the same attack destroyed a power line and left several thousand residents without electricity.

He said that a hotel, two schools, a concert hall, the main municipal building, and other administrative buildings were bombed.

Pictures distributed by Ukrainian officials show a school corridor strewn with rubble from what appears to have been bombed and windows shattered, and an apartment building hit by a missile.

On the other hand, the head of the Ukrainian state nuclear energy company warned, the day before yesterday, of the "very big" dangers posed by the bombing of the Zaporizhia nuclear power plant, and said that it was necessary for Kyiv to regain control of the facility in time in order to prepare for the winter season.

He said that the power lines connecting the station to the Ukrainian grid were damaged, and accused Russia of wanting to connect the facility to its electricity grid.

He pointed out that there are "very high risks" that the bombing will hit containers storing radioactive materials.

Britain, which is helping Ukraine with weapons, intelligence and training, said yesterday it believed Russia had "almost certainly" created a new ground force to support its war.

The British Ministry of Defense said in a daily intelligence bulletin that the new force, called the Third Corps, is stationed in the city of Molyno, east of the Russian capital, Moscow.

The cause of a series of explosions at a Russian air base in Crimea on Thursday remains a dispute, with Moscow saying ammunition stores exploded and Ukrainian officials hinting that Kyiv may have been responsible.

Two US newspapers quoted unnamed Ukrainian officials as saying that the Ukrainian special forces carried out an attack on the air base, which resulted in the destruction of a Russian military plane.