On the 132nd day of the war in Ukraine, Russian President Vladimir Putin on Monday ordered his forces to continue their offensive in eastern Ukraine, the day after the capture of Lysychansk, his Ukrainian counterpart Volodymyr Zelensky warning that repelling the invader would require "superhuman time and effort". 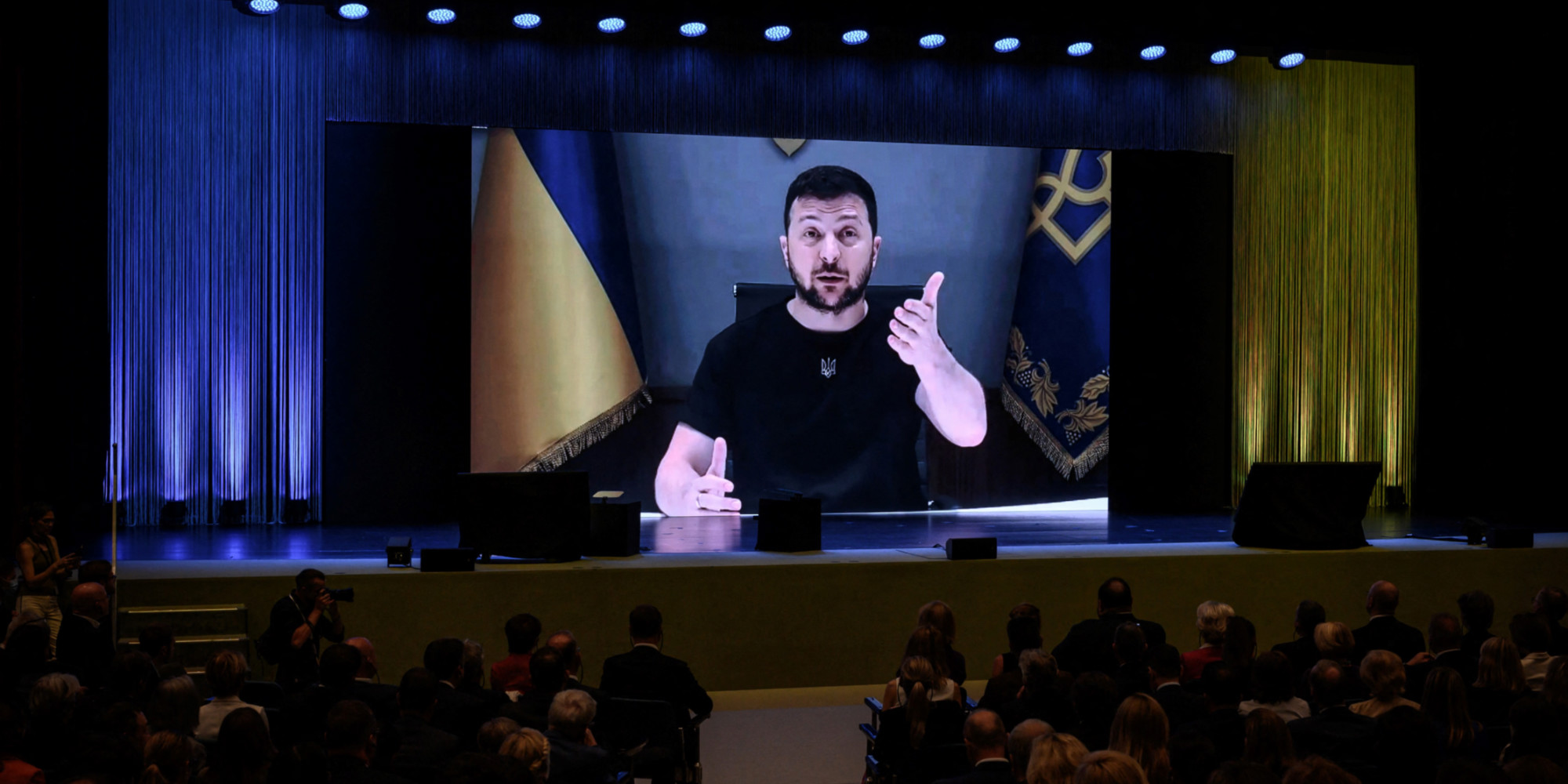 On the 132nd day of the war in Ukraine, Russian President Vladimir Putin on Monday ordered his forces to continue their offensive in eastern Ukraine, the day after the capture of Lysychansk, his Ukrainian counterpart Volodymyr Zelensky warning that repelling the invader would take "superhuman time and effort".

“We must break” the enemy, Volodymyr Zelensky launched in his daily address Monday evening, “it is a difficult mission, which requires superhuman time and effort. But we have no other choice”.

He had spoken a little earlier by videoconference at the opening of an international conference in Lugano, Switzerland, to prepare for the reconstruction of the country.

This will be "the common task of the whole democratic world", he stressed.

kyiv has assessed the cost of this project at 750 billion dollars.

During his evening speech, Mr. Zelensky also explained that he needed these "colossal funds" to help the population, rebuild the cities and infrastructures destroyed by the war, but also "prepare schools and universities for a new school year" and "getting ready for winter".

Its Prime Minister Denys Chmygal, who had been able to make the trip to Lugano, presented a plan "estimated at 750 billion dollars".

The conference is due to end on Tuesday, while the outcome of the war triggered on February 24 by the Russian invasion of Ukraine remains uncertain.

Russia orders its troops to "carry out their mission"

In Moscow, during a meeting with his Minister of Defense Sergei Shoigu, the Russian President meanwhile ordered his troops to "carry out their mission" in application of "already approved plans".

Sunday evening, the staff of the Ukrainian army announced the withdrawal of its units engaged in Lyssytchansk, the last bastion of kyiv in the region of Lugansk (east), which Moscow says now has complete control.

For the Ukrainian forces, the urgency is now to contain the Russian advance towards the west and two major cities in the neighboring region of Donetsk: Sloviansk and Kramatorsk.

10 people including two children died in Russian strikes in Sloviansk

After the capture of Lyssytchansk, the centerpiece of the plan to conquer Donbass, an industrial basin partly controlled by pro-Russian separatists since 2014, "the enemy's main effort (...) aims at a gradual overflow" of the military Ukrainians on this axis, the Ukrainian General Staff said on Monday.

In the evening, the Ukrainian army reported repelled Russian assault attempts in the Kharkiv (northeast) and Donetsk regions.

On the other hand, near Sloviansk, "the enemy launches assaults in the direction of the locality of Mazanivka and partially succeeds there", according to the same source.

According to the governor of the Donetsk region, Pavlo Kirilenko, 10 people, including two children, died on Sunday in Russian strikes in Sloviansk and its surroundings.

Ukraine calls on its people to leave

The front line approaching this city, the Ukrainian authorities are calling on its population to leave.

The streets of Sloviansk were almost deserted on Monday morning, according to AFP journalists on the spot.

In the downtown market ravaged by a fire caused by a Russian strike, a few vendors offered basic necessities while others cleared charred debris.

Vendors and residents expressed their concern for the days and weeks to come, while the explosions of the bombardments were audible.

"I think what awaits us is going to be even worse, I have already thought of leaving," said Andriï Gerassimenko, 38, picking up the debris from the market.

"Nothing good is going to happen, the best thing is to leave," added Viktoria Koloty, a 33-year-old woman who said she had already sent her children away.

Ukraine: on the front line, a permanent danger for Ukrainian troops

In Siversk, between Lyssytchansk and Sloviansk, the Ukrainian soldiers seem to want to hold a line of defense between this city and Bakhmout, further south.

"The enemy has intensified its shelling of our positions in the direction of Bakhmout," confirmed the Ukrainian army staff.

The Russian army, for its part, announced that it had destroyed "seven Ukrainian command posts" in the past 24 hours, "including that of the 25th airborne brigade in the Siversk region".

The Russian Defense Ministry then attacked alleged "Ukrainian neo-Nazis" who, in Belopolye, in the Sumy region (northeast), "mined bridges over the Kryga River, which they intend to blow up" to blame Russia.

In Russia, a drone of unknown origin fell on a civilian home in Taganrog (southwest), near the Ukrainian border, without causing any casualties but setting the house on fire, according to local media.

In Kharkiv, the second largest city in Ukraine (northeast), three civilians died in bombings that occurred before dawn on Monday, according to local authorities.

In Boutcha, a city-martyrdom in the suburbs of kyiv, even if some have resumed planting flowers at the foot of buildings or busying themselves in their vegetable garden, the population does not yet dare to think of reconstruction, when the outcome of the war remains so uncertain.

"We go to bed without knowing if we will wake up tomorrow," sighs Vera Semeniouk, 65.

"Everyone has come back, is starting to repair the houses, many are putting in new windows. It would be terrible if it started again and you had to leave everything again."

In this context, the Lugano conference must attempt to draw the outlines of the future reconstruction of Ukraine.

The "task is really colossal", if only in the liberated territories, Volodymyr Zelensky acknowledged on Sunday.

The organizers of the conference hoped for his physical presence but he participated, as he is now used to, by videoconference in this meeting bringing together the leaders of Ukraine's allies, international institutions but also the private sector.

The conference, planned long before the war, was initially to focus on reforms in Ukraine, including the fight against corruption.

They met the President of the European Commission, Ursula von der Leyen, in order to lay the foundations of a "Marshall Plan" for Ukraine.

The urgency is to help the population affected by the war before, in a second step, to finance thousands of reconstruction projects and, in the long term, to prepare a European, green and digital Ukraine, explained Mr. Chmygal.

Robert Mardini, the director general of the International Committee of the Red Cross, judged on the Swiss public channel RTS that it was vital to give Ukrainians "a positive perspective" now.

The European Investment Bank (EIB) is to propose the creation of a new fund for Ukraine, which could reach 100 billion euros, according to informed sources.

And for Mr. Chmygal, Russian assets frozen in Western countries alone are valued at 300 to 500 billion dollars.