“I haven’t heard a single complaint from my fighters”: how an artillery battalion under the command of a woman is fighting in the DPR

Colonel Olga Kachura knows exactly what she will do when peace comes to Donbass. Known by the call sign Korsa, Kachura has been in command of the rocket artillery unit of the DPR Armed Forces for the past eight years. She has 140 military men under her command, including mobilized conscripts, who must be quickly trained in artillery. How the Donetsk military work under the leadership of Korsa - in the material RT. 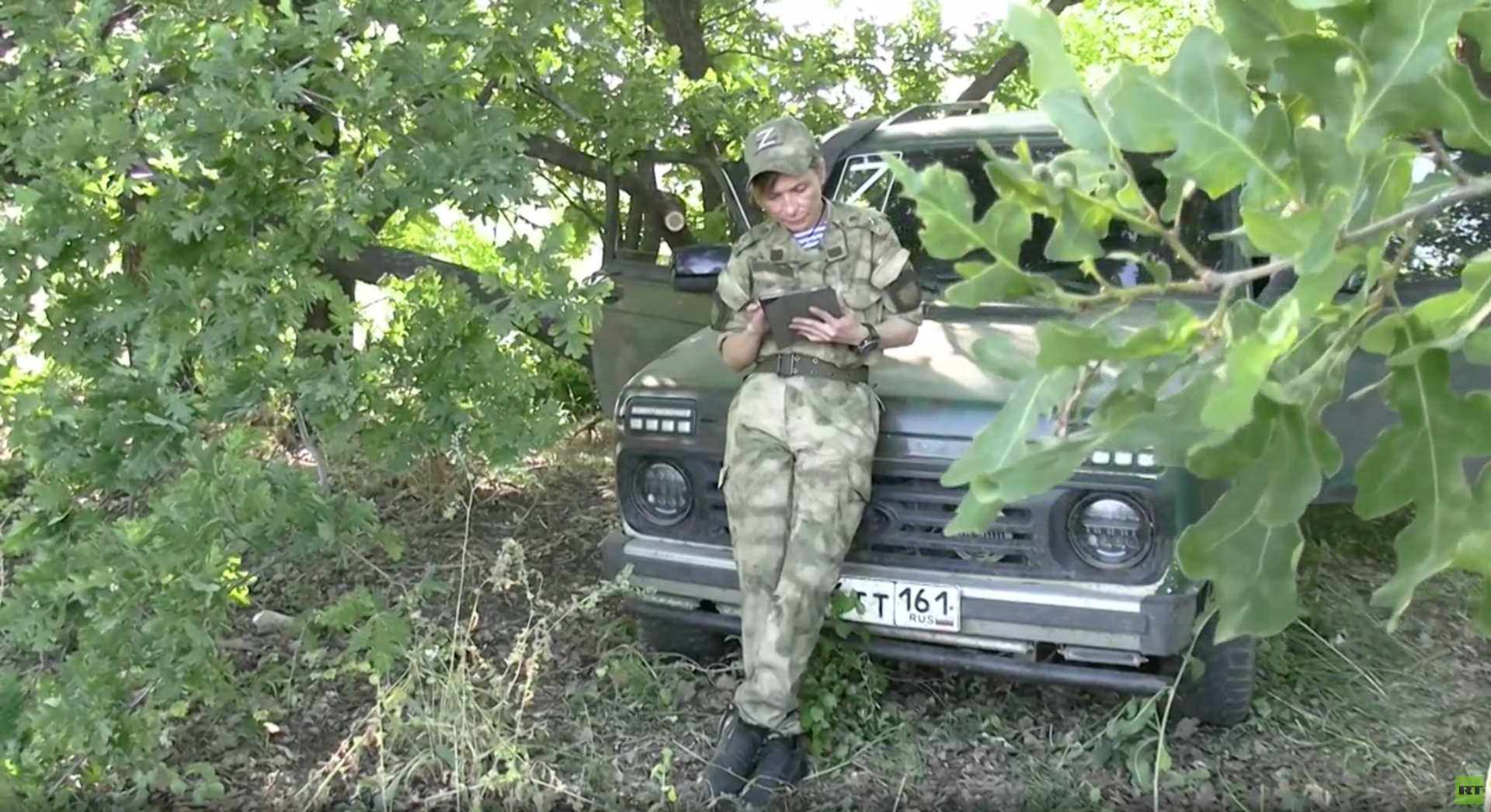 “I’ll be a great grandmother: I’ll teach my grandchildren how to climb fences, shoot from a slingshot — everything that I can do myself,” laughs Olga Kachura (Korsa), commander of the rocket artillery division of the Armed Forces of the DPR.

“Yes, and I probably will have something to tell them when we sit together in the kitchen.”

Olga Kachura is a legend of the DPR army.

Her combat path began in April 2014 from Slovyansk, where she led a rocket artillery unit.

In Ukraine, Olga was sentenced in absentia to 12 years in prison with confiscation of property.

"I have no right to look bad"

We are sitting in the army KUNG (universal body size zero), in which Olga spends her personal time.

“This is my military house,” she says.

The furnishings in the "house" are spartan: two bunk beds, a small refrigerator, kettles and a country washstand.

On a small table are books, documents, as well as a mirror, cosmetic bag and moisturizer.

“So that at the end of the war I wouldn’t be like “take me, babayka, take me,” Korsa corrects her bangs.

“A self-respecting commander will not go out unshaven in front of his subordinates.

And I have the same thing: I have no right to look bad.

Olga says that she has already become involved in the war: she does not get tired physically and is used to the ragged daily routine.

Sometimes she sleeps for an hour, sometimes she manages to lie down for 20-30 minutes to restore her strength.

“When you manage to sleep five or six hours in a row, it’s gorgeous,” Olga admits.

Together with her in this tiny room live a bodyguard, a platoon commander of the division and the chief of staff.

“But they don’t bother me at all, even when they snore,” Korsa smiles.

Olga has 140 fighters under her command, who ensure the operation of multiple launch rocket systems (MLRS) BM-21 Grad.

“One machine spits out 40 rockets in 20 seconds.

I shoot from virtually all types of artillery pieces, but I have always liked the jet guns the most.

This is both a terrible and beautiful weapon.

No wonder our grandfathers during the Great Patriotic War called the grandmother of the modern BM-21 “Katyusha,” Korsa explains.

She and the fighters of her division call these deadly machines affectionate nicknames: “bibika”, “boar”, “partridge”, “children”.

The more effectively the division performs the tasks of destroying the enemy, the faster and with less losses our infantrymen move forward.

Korsa notes that in artillery, the main thing is to get the coordinates.

“I get a task and pass the coordinates to my subordinates to calculate the settings, and then I personally check them.

At this time, the vehicles go to the firing position and wait for the installations and the “Fire!” command to work out the target, says Korsa.

- The faster we work out and hit the enemy, the less likely it is that we ourselves will fall under return fire.

On average, it takes about ten minutes from the moment a task is received to its completion.

Korsa admits that although she is accustomed to war, her sense of caution remains forever.

Before the battery leaves for new firing positions, it always tries to conduct reconnaissance and, with the battalion commanders, choose the most advantageous places for the position.

“I have completely different people in the division - both by nationality and by age.

For me, in the first place in the selection of fighters in the state - their mental abilities.

The ability to think, count, knowledge of algebra and geometry is important,” says Korsa.

The youngest soldier in the division is 18-year-old conscript Frol Artamonov from the village of Karlo-Marksovo, 15 km from Gorlovka.

The guy admits that when he was mobilized on February 28, he was very scared: "I thought that I would not return."

At that time, Frol knew nothing about the army, and even more so about the work of artillery.

“When I was assigned to the division, the older guys said that I was very lucky.

They said about Korsa that she is a smart, powerful tactician - she doesn’t come across to the enemy, ”says Frol.

Olga herself recalls that Frol came to her unit "small, fledgling."

“First of all, a soldier must be fed, given time to get used to and taught, and only then sent to the fire,” says Kachura.

- In a few months, Frol's eyes have become more mature.

When I noticed this, I asked if he wanted to go on a combat mission.

He said he was ready to go."

She is convinced that in war there is no particular division between a colonel and a private: everyone eats at the same table and lives in the same conditions.

You can be friends with subordinates, but in no case should you allow familiarity, otherwise you will lose credibility, she says.

Subordinates address her as “Comrade Colonel”, they can call her by her first name and patronymic if they make a personal request.

But their favorite way of referring to Corsa is "Comrade Commander."

Olga says that she does not consider herself a feminist, but at work she constantly proves that women have a place in the army.

“When my career in the army began, I heard the phrase addressed to me: “What can you take from her, she is a woman.”

Then I thought, “Oh yes!

I will prove to you that I can do more and better than you.

Gender does not affect the work in any way,” she says.

According to Korsa, in 2014 she still had hope that she would be able to resolve the conflict peacefully.

“On May 26, the Ukrainian army for the first time began to bomb Donetsk with the help of aircraft.

That day, I realized that this is a war and Ukraine will never change its attitude towards the DNR,” she says.

- And we are not on the way with Nezalezhnaya.

What kind of state is this that bombs the people, and then calls them “theirs”?

She recalls how she taught her schoolgirl daughter to hide during raids, to avoid objects that could injure during shelling.

This knowledge later helped Alena when, in 2014, Tochka-U, fired by Ukrainian artillerymen, flew to Donetsk.

Thanks to the ability to group, the girl was not injured when, during classes at school, the blast wave from the projectile threw her away and she flew around the classroom for about 5 m.

According to Kachura, the residents of Donetsk have been waiting for the resolution of the conflict for the past eight years.

“Most of my fighters, even those who are now 18 years old, have been waiting for these events for eight long years.

This war was supposed to start anyway, a year earlier or a year later.

For us, this is an event that will allow us to become recognized, join Russia as a subject or autonomy, Kachura argues.

Of course everyone is tired.

Four months is quite exhausting, physically and mentally.

But I did not hear from my fighters a single complaint or desire to turn around and leave.

Everyone has one thought: “Until we finish it off, we won’t go home.”

She adds that in recent months, everyone’s hatred of the enemy has only intensified: “All these eight years they have been shooting at our cities, villages, but this was episodic.

And when this happens every day, with each such arrival, hatred for the enemy becomes stronger.

Like everyone in the DPR, Olga wants peace to come as soon as possible and already knows what she will do after the end of the NWO.

A few years ago, she began studying at the Donetsk Agrarian Academy.

After the war, he plans to finish his studies, retire on a seniority basis and engage in animal husbandry.

And, of course, Olga hopes that when her children grow up and start their own families, she will babysit her grandchildren and tell them in the kitchen how her name was Korsa in 2022 and she, together with her fighters, did everything to ensure that in Donetsk peace has come to earth.