"Peace and Stability": Head of the Caucasus Department of the Institute of CIS Countries - on Russian-Abkhazian Relations

The most promising option for the political future of Abkhazia is the further development of cooperation with Russia as its strategic partner. This was stated in an interview with RT by the head of the Caucasus department of the Institute of CIS Countries Vladimir Novikov. On the eve of the 100th anniversary of the entry of Abkhazia into the USSR, Novikov spoke about how Abkhazia developed as part of the Soviet Union, as well as about the difficulties in Abkhaz-Georgian relations that led to an armed conflict in the 1990s. In addition, he touched upon the problem of difficult Russian-Abkhazian relations in the 19th century and commented on the speculations that arise from time to time in the media regarding Turkey's "excessive influence" on the political processes taking place in Abkhazia. 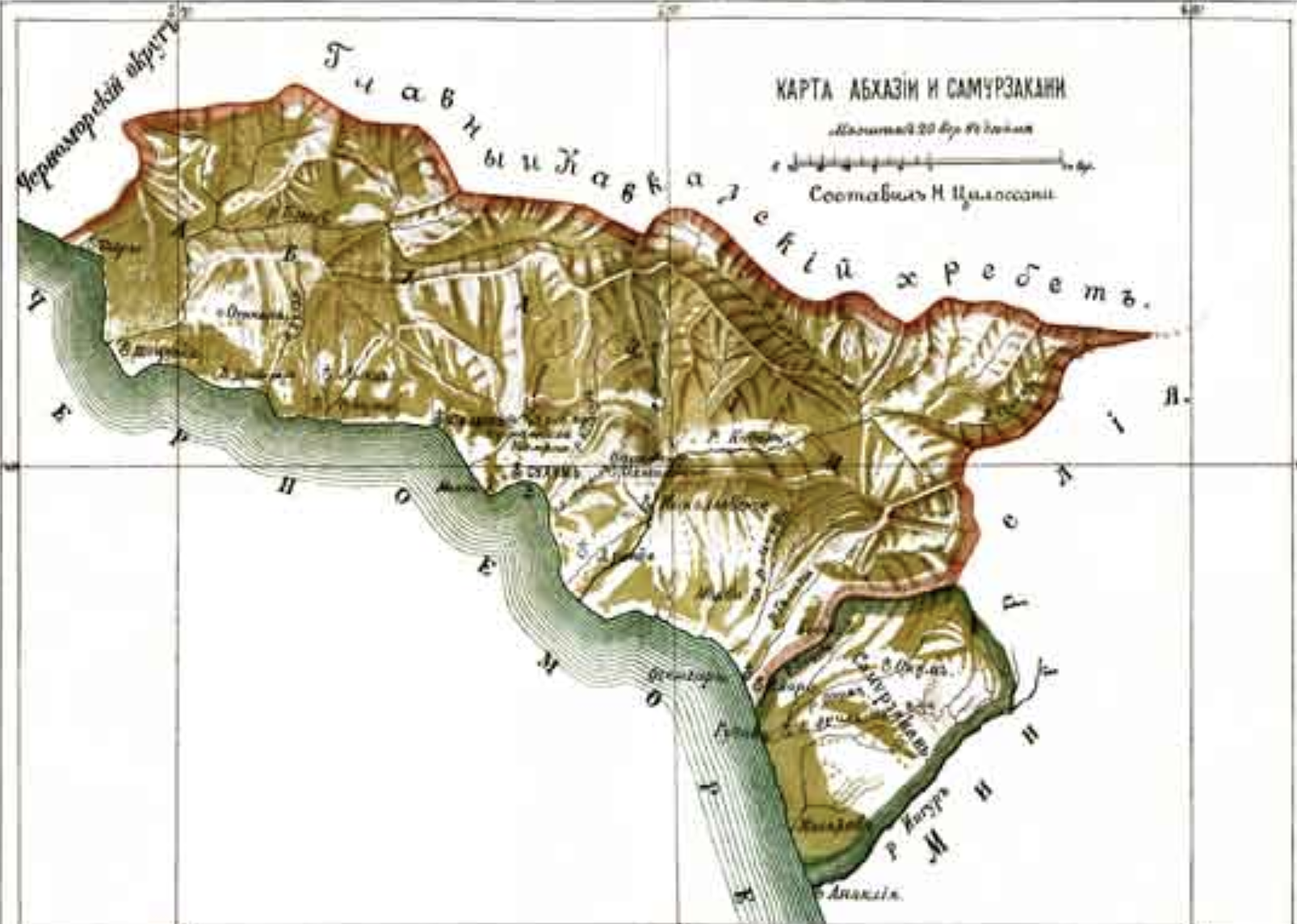 — This year marks the 100th anniversary of the entry of the Soviet Socialist Republic of Abkhazia into the Soviet Union.

Please tell us under what circumstances this happened and what preceded this event?

What was the status of Abkhazia before joining the USSR?

- At the end of the 19th - beginning of the 20th century, Abkhazia was officially the Sukhumi district of the Kutaisi province of the Russian Empire.

In 1917, against the background of revolutionary events in Petrograd, the Abkhaz People's Council (ANS) was created, which wanted Abkhazia to be a member of the South-Eastern Union of Cossack troops, mountaineers of the Caucasus and free peoples of the steppes.

At the same time, the Georgian Mensheviks claimed the territory of Abkhazia.

In June 1918, the armed formations of Georgia, under the pretext of countering the Bolsheviks, occupied Abkhazia.

But at the beginning of 1921 the Menshevik government in Georgia fell.

On March 4, 1921, Soviet power was proclaimed on the territory of the former Sukhumi district, and on March 31 of the same year, the Soviet Socialist Republic of Abkhazia was created.

Abkhazia wanted to join the USSR directly, but under pressure from Joseph Stalin and Sergo Ordzhonikidze, it became part of the Soviet Union as part of the Transcaucasian Socialist Federative Soviet Republic (TSFSR).

It should be noted that, contrary to the assertions of some historians, Abkhazia was not part of Georgia as part of the TSFSR.

There was an alliance treaty between Sukhum and Tiflis (as Tbilisi was then called).

Although Abkhazia delegated some powers to the Georgian authorities, it remained a separate republic.

For some time, this state of affairs persisted, since Stalin was personally indebted to the chairman of the Council of People's Commissars of Abkhazia, Nestor Lakoba, for his participation in negotiations with Turkey in 1920-1921 and his assistance during the political neutralization of Leon Trotsky in 1924.

But in 1931, Abkhazia, by a voluntaristic decision of the Union leadership, was nevertheless included on the rights of autonomy into Georgia.

In exchange for a peaceful annexation to Georgia, the rules of collectivization were somewhat relaxed for Abkhazia.

- During the existence of the USSR, Abkhazia was known as an all-Union health resort.

How did Abkhazia develop within the Soviet Union?

Why was it eventually decided to transform it into an autonomy within the Georgian SSR, and what historical consequences did this lead to?

- It is incorrect to reduce the role of Abkhazia only to an all-Union health resort.

In addition to creating the famous recreational infrastructure, a lot was done for the socio-economic development of Abkhazia in the Soviet era.

Some historians associate these transformations with the name of Lavrenty Beria alone, but this approach is fundamentally wrong.

Yes, Lavrenty Pavlovich really made a certain contribution to the transformation of Transcaucasia.

But first of all, the socio-economic development of Abkhazia at the beginning of the Soviet era is the merit of Nestor Lakoba and his associates.

For example, Lakoba originally owned the idea of ​​building the city of Tkvarcheli, which was actually founded after his death, during the Great Patriotic War.

A large industrial center was created in it, coal and other minerals were mined.

both commercial and military, sailed on Tkvarcheli coal.

Tellingly, Lakoba initially wanted to close the industry of Tkvarcheli not to Georgian metallurgical enterprises, but to Russian ones.

As for the political component of the issue, the leadership of the Georgian SSR pursued an active migration policy to resettle Georgians in Abkhazia, especially Mingrelians.

This was due to several reasons.

First, from the point of view of the economy, Abkhazia is a rich land with access to the sea.

Secondly, back in the middle of the 19th century, a national myth was formed in Georgia, according to which its heyday fell on the time of the existence of the medieval Georgian-Abkhazian state, which arose as a result of a dynastic union.

Based on this, the Georgians considered Abkhazia theirs.

This led to the occupation of Abkhazia by the Georgian Mensheviks, which we have already spoken about.

But even after the establishment of Soviet power in Georgia, the myth of "their own" Abkhazia did not disappear.

Proletarian internationalism failed to kill him.

Many representatives of the Abkhazian intelligentsia and the administrative elite became victims of the repressions of the 1930s.

Until the 1980s, there was no open interethnic hostility between Georgians and Abkhazians, but the pendulum of interethnic tension swayed from time to time.

On the one hand, the issue of revising the state-legal status of Abkhazia was repeatedly raised, on the other hand, there was political pressure from the Georgians on the Abkhazians.

For example, at certain periods of time in the city of Gagra they tried not to register ethnic Abkhazians at all.

- Why in 1991 the population of Abkhazia did not want to live as part of Georgia, wishing that their republic remained part of the Soviet Union?

Why did the Georgian-Abkhazian conflict start in the 1990s?

How did it develop and what role did Russia play in its settlement?

- It all started with the appearance in Georgia of the so-called "informals" - representatives of informal national-political movements, demanding, in particular, to eliminate the Abkhazian autonomy.

"Non-formals" argued that the modern Abkhazians are supposedly an alien ethnic group, descendants of tribes that migrated from the North Caucasus in the 17th century, and Abkhazia is "an ancestral Georgian land."

They claimed that those who were called Abkhazians in the Middle Ages were in fact representatives of one of the Georgian sub-ethnic groups, which had nothing in common with modern Abkhazians.

Taking into account such conversations, it is clear why Abkhazia did not want to live as part of Georgia.

National contradictions led in 1992 to an open military confrontation.

The entry of peacekeeping forces into Abkhazia by Russia in 1994 guaranteed peace and stability in the region.

Another thing is that our diplomacy for quite a long time - from the 1990s and ending in 2008 - lived with illusions that Abkhazia should again become part of Georgia and that as a result of this we will get a single neutral Georgia that will not aspire to join NATO.

As we can see, this point of view did not justify itself in the end.

— It is known that there were difficult moments in the history of Russian-Abkhazian relations in the 19th century.

A significant part of the ethnic Abkhazians during the Caucasian and Russian-Turkish wars left their homeland and fled to the Ottoman Empire.

What was it about?

“It was a multifactorial process, and trying to put the blame on any one side does not make sense.

Of course, the Russian-Ottoman rivalry in the Caucasus played a role in the fact that the resettlement took place - in particular, the support of the Turkish side by part of the Abkhaz nobility during the wars between Russia and the Ottoman Empire.

But there are other factors as well.

For example, Megrelian and Georgian feudal lords, who had their own accounts with the Abkhazian principality, tried to manipulate the Russian administration in the Caucasus, artificially provoking the emergence of Russian-Abkhazian contradictions in order to take possession of the disputed lands.

History knows many tragic events, which make no sense to evaluate from the standpoint of modernity, and the resettlement of a part of the Abkhazians to Turkey is one of them.

- Today in the media one can come across the opinion that Turkey, through the Abkhaz diaspora, is trying to exert political, economic and cultural influence on Abkhazia.

How can such claims be judged?

Are there any signs that Turkey will be able to increase its presence in Abkhazia to the same level as in other regions of the Caucasus, in particular, in Adjara?

If there are attempts to establish such influence, why doesn't Turkey officially recognize Abkhazia?

There is also a fairly large Abkhazian diaspora in Turkey, some of which actually maintain relations with their compatriots on the territory of Abkhazia.

For example, there is communication between relatives.

But it is impossible to say that Turkey has any significant political influence in Abkhazia.

This is more of a speculation.

The fact that as a result of the hypothetical weakening of Russia's attention to Abkhazia, Turkish influence will increase there can only be imagined in theory.

The arguments of some experts that Turkey is allegedly trying to oust Russia from Abkhazia and increase its political influence on local authorities are simply ridiculous, because the Abkhaz society itself is oriented towards Russia.

But, since the Abkhaz diaspora in other countries has a certain weight, the Russian side itself would have to arrange work with it both in Turkey and in the Middle East, in particular, in Syria.

— How can you characterize Russian-Abkhazian relations today?

- Russia was the first to recognize the independence of Abkhazia, is its strategic partner and main investor in the Abkhaz economy.

The inhabitants of Abkhazia see the Russian military presence on their territory as the main guarantee of their own security and are grateful to Russia for the peaceful sky above their heads.

The most promising option for the political future of Abkhazia is the further development of cooperation with Moscow as an independent state, the expansion of friendly and allied relations with Russia.