Artists, journalists and intellectuals lived there.. controversy in Egypt after the decision to remove Nile floats

As the time of the elite of the last century has passed, it seems that the current century will witness the end of the buoys with the secrets and memories of that elite and their time, after the Egyptian government decided to remove all residential buoys, which raised controversy and questions. 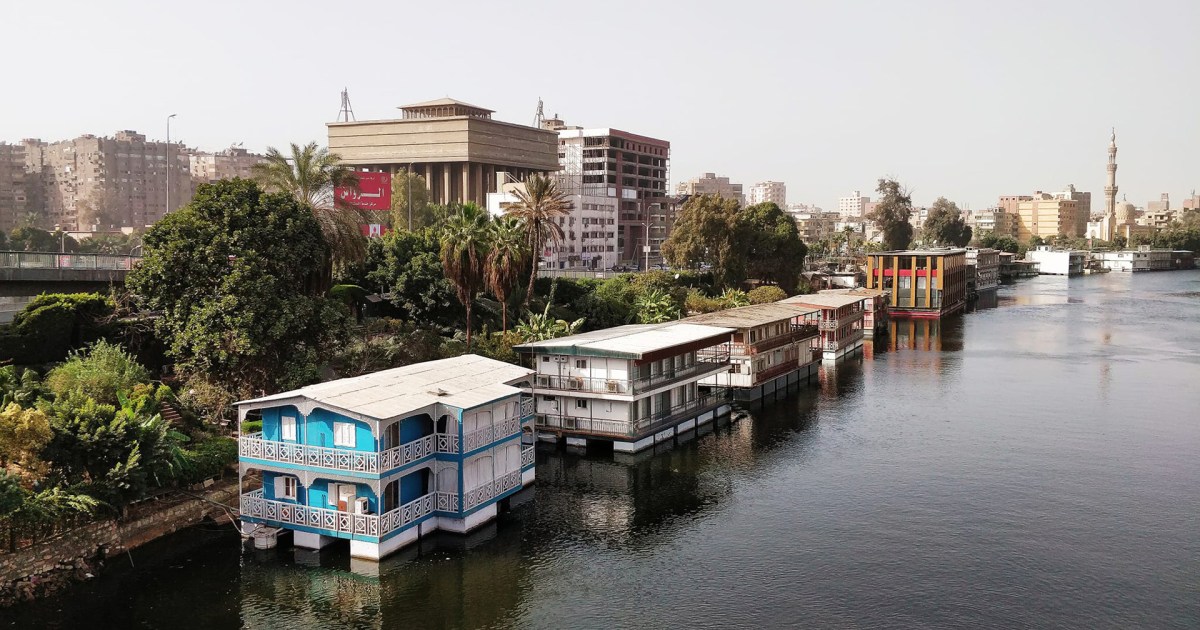 For many years, the floats (fixed houses) and goldfish (moving houses) that live above the Nile are among the most important features of Cairo, in which the elite of Egyptian society lived in the last century, including ministers, artists, journalists and intellectuals.

And as the time of this elite passed in the last century, it seems that the current century will witness the end of these buoys, with the secrets and memories they carry from the beautiful time, after the Egyptian government decided to remove all residential buoys and keep only the tourist buoys, as part of the development of the Nile Corniche in the Egyptian capital.

The news of the removal of the buoys sparked a state of sadness among the pioneers of social networking sites in Egypt, given the urban heritage they represented, amid calls for a solution that would allow the preservation of these historic homes.

In statements to the Director of the Central Administration for the Protection of the Nile River in Greater Cairo, Ayman Anwar, he said that 15 buoys will be removed on June 28, and 4 more buoys will be removed on July 4, claiming that they are unlicensed, and that their owners refuse to pay the financial dues. The state imposes them on them, and there is no point in continuing to oppose the state.

On June 20, the owners of the buoys received a notification from the Nile Protection Department, specifying the 28th of the same month to remove their buoys, claiming that they were “without a license.” 3 of them have already been removed this week, and officials said that they were reserved because they are owned by leaders in a group. Muslim Brotherhood.

The residents of the rafts deny that they failed to obtain their license until 2021, due to the refusal of the Governor of Giza and the Projects Authority of the Armed Forces to renew the license.

Anwar stressed, in a telephone interview with the Cairo talk program on the “Cairo and the People” satellite channel, that the government’s decision to remove residential buoys is old since 2020, and that the committee that made the decisions includes a number of ministries and is chaired by the Minister of Justice personally, and that the government has given more than one deadline for the residents to evacuate the buoys. However, they refuse to implement the decisions so far.

Regarding the existence of a space for understanding with the residents, the director of the Central Department for the Protection of the Nile River said that the area has come under the authority of the Armed Forces Land Projects Authority, and that the administration is only responsible for removing these buoys.

Ikhlas Helmy, the owner of the first buoy near the 15th of May Bridge, told Mada Masr (exclusive): "I am 87 years old, and I sold two apartments in Zamalek to spend the rest of my life on the Nile, and suddenly the government decided to throw me in the street and take the buoy with money on it. also".

She said that she bought her buoy 20 years ago, and that its price is now more than 7 million pounds, pointing out that she received 3 days ago a warning to remove from the Nile Protection Department at the Ministry of Irrigation, asking her to vacate the buoy no later than next Tuesday, June 28, because of They anchored it without a license, and with a notice of payment to pay more than one million pounds, the value of the usufruct of the land on which the floating land is located without a license.

She says that the ministry's employees sympathized with us by saying, "What are we doing? The issue is greater than us."

In turn, the Egyptian novelist Ahdaf Soueif, who owns a buoy that is threatened with removal, said that residing in a buoy requires obtaining more than one license, pointing out that in addition to the navigation license, "we also obtain a license from the Ministry of Irrigation, and we pay money to the Ministry of Agriculture in exchange for using the space from way to reach the buoy.

Soueif said that since 2013, there has been a continuous increase in the value of licenses, and it has reached 20 times, and the license has reached about 70,000 pounds (the dollar is about 19 pounds), so we filed a lawsuit against the minister's decision, and it has not been decided yet.

She indicated that she did not find an answer to a question directed to the government: "Why do you consider me unlicensed and violating, and you are the one who refused to renew the license?"

Soueif , "Our current situation as residents of kitkat buoys, which will be removed within the beginning of June 28" https://t.co/1NRp0ckhWQ pic.twitter.com/TJhm187DmX

Death and ruin of homes

The eviction and removal is not the only crisis facing the owners of the buoys, as they will have to pay heavy fines to the Ministry of Irrigation as well.

Manar, the owner of one of the buoys, said that after receiving the decision to remove the buoy on June 20, she was surprised the next day by the Ministry of Irrigation, demanding that it pay 420,000 pounds, a fine for anchoring on the Nile for two years without a license.

Regarding the fines, Ahdaf Soueif indicated in press statements that the fines are very large and differ from one person to another, adding that there are those who are demanded by the ministry for a fine of 750,000 pounds, while others demand more than one million pounds.

Ahdaf and Manar confirmed that the employees informed the residents of the necessity of paying the fine, and that they would seize the buoy and sell it for scrap to pay the fine.

The issue of destroying the Nile floats is seriously depressing me, as is the issue of cutting down trees. It raises fearful questions that I know the answers to.

The floats located in the high-end areas of Cairo, such as Zamalek, Garden City and Dokki, bear witness to an era in all its details and vocabulary, as it was in the first half of the last century a center for prominent political, social and cultural events.

The stars of society in Egypt - with their different orientations - were keen to be among their peers who own the Nile rafts, and the wealthy, seniors and celebrities of Cairo competed to own the rafts in these areas.

The floats were closely related to art and politics, and one of the most famous of these floats was the artist, Munira al-Mahdiyya, who sometimes witnessed the meetings of the Egyptian government in the second decade of the last century. News of the country, but no one thought at that time that the Council of Ministers is meeting on my floats,” according to the Egyptian newspaper Al-Wafd.

There is also a float dancer, Hikmat Fahmy, who turned into a headquarters for spying on the English forces in Egypt, after the Germans recruited her in their favor through a German spy who fell in love with her.

One of the most famous writers and artists who lived in the Nile buoys is the Nobel Prize-winning writer Naguib Mahfouz, who was a fan of the rafts and has been a resident of the Hussein Pasha Diab buoy for 25 years, during which he wrote his novels: “Gossip over the Nile” and “The Children of Our Neighborhood.” And “The Thief and the Dogs”, and “The Quail and the Autumn”, and there is the buoy that witnessed the filming of scenes of the movie Days and Nights, starring Abdel Halim Hafez and Iman, and it was owned by Hussein Pasha Shukri.

The removal of the buoys sparked a wave of sadness mixed with anger on social media in Egypt, and some denounced the Egyptian government's simple removal of the historic buoys.

A number of tweeters launched a campaign to demand the preservation of buoys, as they represent part of Egypt's architectural history, and as a sign of its diversity and distinction, and its connection to Egypt's social, cultural and artistic heritage, calling for a solution that leads to the legalization of its conditions.

Some also denounced what was witnessed by removing 3 previous buoys from random demolition and polluting the Nile with waste and wood, instead of moving them to a place where they can be demolished in a way that preserves the Nile River from pollution and preserves the contents of the buoys.

While the Egyptian authorities say that describing sites and homes as archaeological or civilized is a legal description based on local and international standards and assessments, and that the floats are encroachments on state lands, and their removal is a correction for such violations, similar to what the state is currently doing to remove slums in several areas. Then develop it.

I lived in a raft on the Nile in Kit Kat for about 6 years.

It is very painful that these floats are removed from their place, frankly.

It is possible for me to forgive, after the permission of the governor, the sponsor, or the one who has the decision in this country, to leave parts of the urban history of the country in its case. I mean, some visual identity like this goes with the subject of our Egyptian identity, which we are making processions.

There are posts circulating on Facebook regarding the removal of buoys or Nile gold in Imbaba. These are heritage floating houses that have existed since the days of the English, and they are an archaeological treasure!

We hope for a clear response from the responsible gentlemen. Was an order issued to remove heritage buoys?

In this case, it must be reviewed at the highest level, or has it not been issued and these are rumors?

Remove the Nile floats on Abu Al-Feda Street, in Zamalek, in terms of artistic, historical, and moral value, so that they cannot do justice to the need for justice, and they must achieve it.