More than 30 Houthis were killed in an ambush by the Yemeni army forces and the tribes on the Al-Mashjah front, yesterday, with the continuing confrontations between the two sides on the fronts in the west and north of Ma'rib, as the coalition fighters continued to target the Houthi militia sites in Marib and Al-Jawf, where they bombed a militia meeting in Al-Jawf. 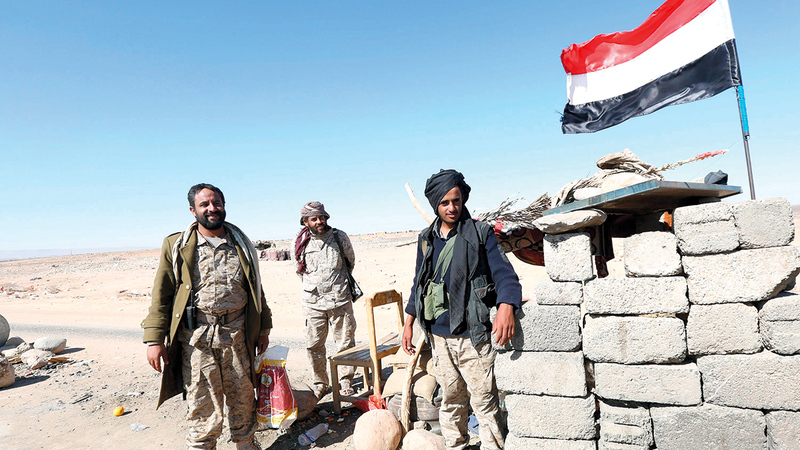 The bombing of a militia meeting in Al-Jawf

The army and tribal fighters carried out surprise attacks and set up ambushes for the Houthis in the vicinity of Al-Kasara and Al-Mashjah.

More than 30 Houthis were killed in an ambush by the Yemeni army forces and the tribes in the Al-Mashjah front yesterday, with the continuing confrontations between the two sides on the fronts in the west and north of Marib, as the coalition fighters continued to target the sites of the Houthi militia in Marib and Al-Jawf, as they bombed a meeting of the militias in Al-Jawf, while they failed The army forces made a Houthi advance on the Al-Agashir front in Saada, and another in Abs Hajjah, while the joint forces demolished Houthi hideouts on the western coast.

In the details, many members of the Houthi militia were killed, and others were wounded in surprise attacks carried out by the Yemeni army and tribes, on the fronts west of Ma'rib and Al-Jawf, yesterday, according to field sources, confirming the killing of 30 Houthis, and the wounding of others in an ambush by the army in Al-Mashjah, west of Ma'rib, including The Houthi leader, Bashar al-Sharif, who was killed along with a number of his companions.

The sources reported that the army and the tribes carried out surprise attacks, and set up ambushes for the Houthis in the vicinity of Al-Kasara and Al-Mushajeh, and along the areas of confrontation extending from the district of Medghal to Sarwah. And other families.

According to the sources, violent confrontations took place between the two sides on several battlefronts in the Medghal district, northwest of Ma'rib, concentrated on the Mas fronts and Wadi Hallan, and extended to the Ragwan front, adjacent to it, and extended to the Jabal Helan front in Serwah, west of the governorate.

On the front of Wadi "Dhanna" between Sanaa and Marib, the army forces backed by the tribes of Bani Dabyan thwarted an attempt by the militias to infiltrate towards the valley linking Sanaa and Marib and heading towards the Ma'rib Dam.

For its part, the coalition fighters launched a series of raids targeting Houthi sites, gatherings and vehicles in different areas of Marib, which led to the destruction of four combat vehicles, killing and wounding the Houthis on board, and bombed Houthi reinforcements as they were leaving the capital, Sana'a, towards Ma'rib.

Meanwhile, local sources in the Nehm district confirmed that the Houthi militia had sent huge combat reinforcements by transferring the Farda in the district towards Ma'rib during the past few days, as the road linking Sanaa and Marib was cut off from the direction of the Farda, to facilitate the passage of combat vehicles from tanks and vehicles carrying weapons towards Marib.

And local sources in Al-Abdiya district, in the south of the Ma'rib governorate, reported that clashes took place between tribes and Houthi militiamen, in connection with the killing of one of the directorate’s sons.

The sources pointed out that clashes erupted between the tribes of "Al-Khasaa and Al-Thabti" in Al-Abdiya district, and the Houthi militia, against the background of the killing of a member of the tribe called "Muhammad Al-Shalfa" by Houthi elements, which prompted the militias to send reinforcements to the region and besiege the tribes revolting against them, pointing out to The situation transpired for more confrontations between the two sides.

The army and tribes bombed Houthi sites on the "Al-Jadafir" front, causing precise injuries, according to a field source, indicating that the Houthis suffered deaths and injuries in the attacks, as well as the destruction of combat vehicles.

In Saada, the coalition forces thwarted a Houthi attack on the “Al Khawar Hills” area in the Al-Aagher desert, and caused them heavy losses.

In Hajjah, the army and the resistance forces bombed Houthi sites in the vicinity of the Rabou'a market in Bani Hassan in the Abs district, and inflicted casualties on them, including the Houthi leader, known as "Abu Zaid", while others were wounded.

The Houthi militia had killed more than 100 of its members, including 60 field leaders, who were killed last week on the fronts of Ma'rib and Al-Jawf, according to sources familiar with the Sana'a, confirming that among the dead were the Houthis, the leaders, Colonel Yahya Ali Al-Hawati, and Colonel Tariq Musleh Al-Qahif. And Colonel Ammar Hashem al-Idrisi, and Colonel Maher Muhammad al-Faqih.

In Hodeidah, the joint forces demolished the newly established fortifications of the Houthi militia in the Al-Jah area in the Beit Al-Faqih district, and caused losses among its members, in a military operation described as the sudden quality that thwarted the Houthi plans in the region.

The militias bombed residential areas in the city of Haiss, south of Hodeidah, with more than 17 mortar shells, causing a state of panic and terror among civilians.

The joint forces monitored 95 violations of the UN truce committed by the Houthi militia yesterday, in the districts of Al-Tuhaita, Hais, Al-Duraihimi, and east of Hodeidah city. The violations included hostile operations against civilians represented by the bombing and targeting of their homes and farms with various types of heavy and medium weapons.

In the context of the Houthi violations, the city of Dhamar, south of Sanaa, witnessed a large uprising of the city’s residents against Houthi members, and they expelled them from the vicinity of the Al-Ayani Mosque and prevented them from approaching, despite sending large reinforcements to the area with the aim of preventing the holding of Tarawih prayers on the Night of Power. Al-Houthi elements to leave and perform prayers, as hundreds of worshipers gathered in the mosque and its surrounding areas to a large extent.

According to a number of worshipers, the prayers were held and loudspeakers were opened, despite the Houthis, who found themselves unable to prevent prayer and force the worshipers to leave the mosque, in the first process of rejecting Houthi measures to prevent Tarawih prayers from being held in their areas of control.

In Al-Mahwit, a Houthi supervisor, Mohammed Nasser Zayed, in the Hafash district, killed a 90-year-old "imam of a mosque" in the district, to prevent Taraweeh prayers on Laylat al-Qadr, which sparked the people's discontent and disapproval.

• The militias killed 100 of their members, including 60 field commanders, who were killed on the fronts of Ma'rib and Al-Jawf.