Verstappen takes revenge on Hamilton, the Dutch triumphs in Imola

Bahrain's order of arrival overturned. The Red Bull driver and the British Mercedes driver matched up at the top of the standings. At the 'Enzo e Dino Ferrari' racetrack Norris third, fourth and fifth the red with Leclerc and Sainz. Rain and accidents, but without consequences. New start launched after 32 laps 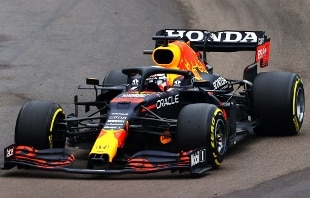 18 April 2021Max Verstappen triumphs in Imola with an all-head race. In the second round of the Formula 1 World Championship, the Dutchman of Red Bull beats the world champion Lewis Hamilton (Mercedes), reversing the order of arrival of the first GP of the season in Bahrain. Third was the other British Lando Norris (McLaren). Ferrari fourth and fifth with Charles Leclerc and Carlos Sainz. In the points also Daniel Ricciardo (McLaren), Lance Stroll (Aston Martini), Pierre Gasly (Alpha Tauri), Kimi Raikkonen (Alfa Romeo) and Esteban Ocon (Alpine).

In the standings, Verstappen and Hamilton are paired in the lead with 43 points, followed by Norris with 27, Leclerc with 20, Bottas with 16 and Ricciardo and Sainz with 14.

Emilia Romagna Grand Prix at the 'Enzo e Dino Ferrari' Autodrome with rain and many accidents, fortunately without consequences for the drivers. Circuit of 4,909 km to be covered 63 times for a total of 309,049 km.

Departure in the rain to Imola. At the first corner, contact between Hamilton (started from pole) and Verstappen (second row), with the Red Bull driver shooting ahead of the British. On the second lap the safety car was immediately on the track due to Latifi's accident, which ended up against the barriers, without consequences. Schumacher also went off the track and hit the wall, returning to the track with the damaged car. The safety car comes out with Verstappen ahead of Hamilton and Leclerc; Sainz's Ferrari is in seventh place, but on lap 11 it leaves the track and returns behind Ricciardo and Norris. On the 12th lap Perez suffers a stop and go for overtaking the safety car. The rain stops and the track dries quickly. Tire changes begin. On lap 28 Verstappen's pit stop who falls behind Leclerc,Hamilton in the lead only briefly because in the next lap he stops and returns to second place, third Leclerc who also stopped; followed by Norris, Perez, Sainz and Ricciardo. On lap 31, Hamilton's error goes long and returns with a damaged wing.

On lap 32 contact between Russell and Bottas, safety car on the track, then red flag and race interrupted due to too much debris on the track. This is the new starting grid: Verstappen, Leclerc; Norris, Perez; Sainz, Ricciardo; Stroll, Raikkonen; Hamilton, Tsunoda. With the start launched behind the safety car Verstappen keeps the lead while Norris overtakes Leclerc. While Perez spins, Hamilton begins his ascent. The two Ferraris put Norris in their sights, but Hamilton also sets out in pursuit of second place, overtaking the Spanish Ferrari driver. On lap 55 Hamilton overtakes Leclerc, the “reds” headed towards fourth and fifth place. In the 60th round, the British Mercedes champion overtook Norris and conquered the second position.