The model predicts that the cumulative deaths of the new crown in the United States in August this year may exceed 610,000 cases. The cumulative number of diagnoses in South Asia exceeds 15 million

(Fighting New Coronary Pneumonia) The model predicts that the cumulative deaths of the new crown in the United States in August this year may exceed 610,000 cases, and the cumulative number of confirmed cases in South Asia exceeds 15 million   China News Service, Beijing, April 11th. Comprehensive news: The latest data from the World Health Organization website shows that as of 14:52 on the 10t 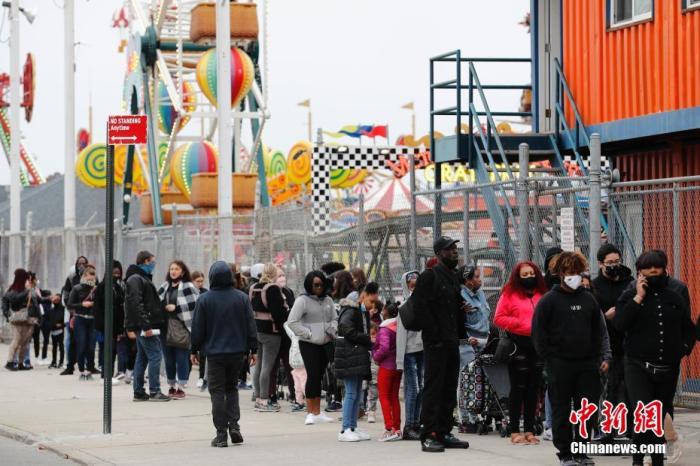 (Fighting New Coronary Pneumonia) The model predicts that the cumulative deaths of the new crown in the United States in August this year may exceed 610,000 cases, and the cumulative number of confirmed cases in South Asia exceeds 15 million

Americas: The model predicts that the cumulative deaths in the United States in August this year may exceed 610,000

According to a report by CNN on the 10th, the model forecast of the Institute of Health Statistics and Evaluation (IHME) of the University of Washington shows that by August 1 this year, about 618,523 people in the United States will die of new coronary pneumonia.

But if 95% of Americans insist on wearing masks, the estimated death toll will drop to 604,413.

Researchers said that with the new crown vaccination, how many Americans continue to wear masks will affect the death toll.

The forecast also shows that in the worst case, if the people who have completed the vaccination return to the level of mobility before the epidemic, the number of new crown deaths will increase to 697,573.

The Mexican Ministry of Health notified on the 10th that there were 6,356 newly confirmed cases in the country, with a total of 2,278,420.

The Mexican Ministry of Health also announced 2,192 new deaths that day, and said that two-thirds of the cases were unrecognized deaths last year.

The cumulative number of deaths from the new crown in Mexico currently exceeds 200,000.

The second batch of new crown vaccines purchased by the Ecuadorian government and produced by China's Kexing Company arrived on the 10th at the capital, Quito’s Sucre International Airport.

Ecuadorian Vice President Muñoz said at a press conference held at the airport that today is a day of hope for the Ecuadorian people. This batch of vaccines will provide important guarantees for the smooth progress of the national vaccination plan.

Europe: Over 5 million confirmed cases of COVID-19 in France

According to the new crown epidemic data released by the French official on the 10th, the country had 43,284 newly confirmed cases that day, with a total of more than 5 million cases, reaching 5,023,785 cases.

France has thus become the fourth country in the world with a cumulative total of more than 5 million confirmed cases after the United States, India and Brazil.

The data also showed that there were 210 new deaths in the country and a total of 98,605 deaths.

The number of critically ill patients with the new crown in France continues to rise, now at 5769, and the intensive care unit is facing greater pressure.

The number of COVID-19 hospitalizations (excluding patients in the intensive care unit) was 27,654, a slight decrease from the previous day.

The total number of new coronary patients receiving treatment in the intensive care unit also dropped to 3588 from 3603 the day before.

Romanian official data on the new crown epidemic released on the 10th showed that the country has newly confirmed 4,310 new cases in the past 24 hours, with a total of more than one million confirmed cases, reaching 1,002,865; 139 new cases of new crown deaths, totaling 25,006.

The Romanian Ministry of Health issued a communiqu on the same day that the capital Bucharest is currently out of critically ill beds.

Minister of Health Voiculescu last week asked hospitals to postpone or cancel non-emergency and non-essential operations, and called for full use of human and material resources in various regions to deal with the current pressure on the medical system.

But this move caused dissatisfaction among some patients and their families.

On the afternoon of the 10th, there were demonstrations in Bucharest and other places.

Asia: A total of over 15 million confirmed cases in South Asia

According to Reuters statistics, as of the 10th, the cumulative number of confirmed new crowns in South Asia has exceeded 15 million.

Among them, India reported 145,384 newly diagnosed cases on the 10th, breaking the highest record for the fifth time this week.

In response to the fourth wave of the new crown epidemic, Iran announced on the 10th that it will tighten epidemic prevention and control measures across the country from today.

In the next 10 days, Iranian people will be prohibited from traveling to and from cities at high risk of the epidemic, non-essential industries will be closed, and schools, entertainment centers and other public places will be closed.

According to statistics from the Japan Broadcasting Association Television Station on the 10th, Japan had 3,454 newly confirmed cases on the 9th, and more than 3,000 newly diagnosed cases in 3 consecutive days; a total of more than 500,000 confirmed cases, reaching 500422 cases; 27 new deaths and a cumulative total of 9365 deaths

Comoros' new crown vaccination was officially launched in the capital Moroni on the 10th local time. President Azali of Comoros received the first dose of the new crown vaccine produced by China National Pharmaceutical Group at the Elmaruf Hospital in the north of Moroni.