Why did Xi Jinping look at the mountains at the first stop on his trip to Fujian? (Precious old photos included)

First Observation | Xi Jinping's trip to Fujian, why the first stop is to look at the mountains? (Precious old photos included)   After the National Two Sessions, General Secretary Xi Jinping left Beijing for the first time and came to Fujian. The first stop is Wuyi Mountain.   Just as the "14th Five-Year Plan" outline was passed and implemented, the "14th Five-Year Plan" was fully launched. Wh 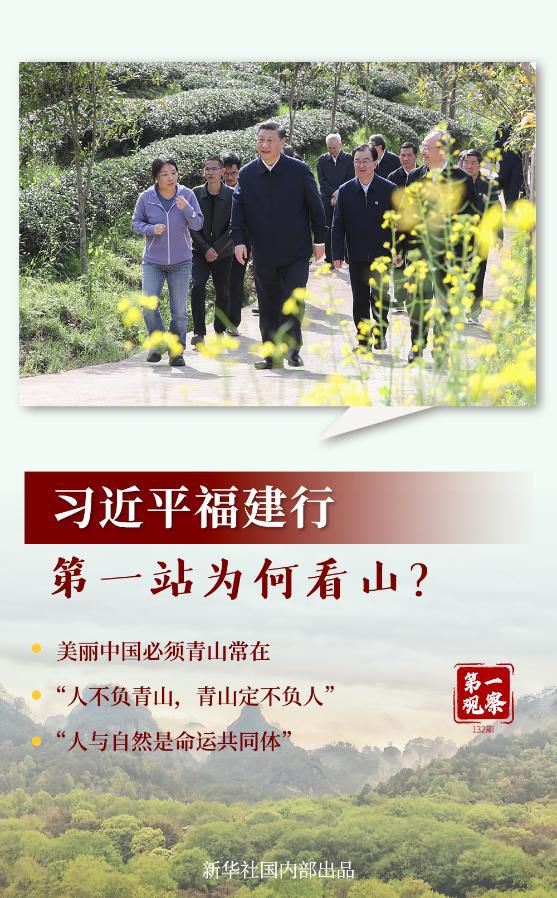 First Observation | Xi Jinping's trip to Fujian, why the first stop is to look at the mountains?

After the National Two Sessions, General Secretary Xi Jinping left Beijing for the first time and came to Fujian.

The first stop is Wuyi Mountain.

What's the meaning of the first stop of the general secretary's local inspection to see the mountains?

The Wuyi Mountain under investigation, which stretches for thousands of miles, is an important ecological safety barrier in southeast my country and one of my country's four world natural and cultural heritages. The comprehensive ecological value can be seen.

For the mountain, the general secretary is very concerned.

Remember the mountain mentioned by the general secretary during the two sessions?

In the delegation of Inner Mongolia, the general secretary emphasized: "Coordinate the management of landscapes, forests, fields, lakes, and sands."

"I think you are from Menyuan County. At the southern foot of Qilian Mountain, you will reach Wuwei in Gansu after crossing the mountain."

In recent years, the general secretary went to local areas for inspections, and seeing the mountains was an important arrangement.

In August 2019, during an inspection in Gansu, I came to the northern foot of the Qilian Mountains and overlooked the towering Qilian Mountains to learn about the ecological restoration and protection on the spot.

In 2017, the ecological environment of the Qilian Mountain National Nature Reserve in Gansu once set off the "most severe" accountability storm in history.

The illegal coal mining incident in Qinghai’s Muli mining area, which was strictly investigated last year, once again warned that the ecological protection of Qilian Mountains still has a long way to go.

In April 2020, during an inspection in Shaanxi, the first stop of the General Secretary was to look at the mountains first and go directly to the Qinling Mountains to learn about ecological protection.

There has been an incident of illegal villa construction in Xi'an at the northern foot of the Qinling Mountains. The general secretary has issued six important instructions in four years. The lesson is not unprofound.

During the inspection in Shaanxi, the general secretary warned local cadres: "Qinling's illegal construction is a big lesson", "You must consciously talk about politics, and have a good idea about the country."

In the general secretary's consideration of ecosystem governance, mountains are very important.

"Ecological Security Barrier"-the general secretary also often uses this term to describe the role of mountains in conserving and protecting the ecology.

During the two sessions, the general secretary also said a meaningful sentence: "Entering a new era and entering a new stage of development, our understanding must also continue to develop and deepen. We must have an ecological understanding and an overall awareness."

Fujian has many mountains, and there is a saying of "eight mountains, one river and one field".

The data in 2019 show that the forest coverage rate reached 66.8%, ranking first in the country for 40 consecutive years.

The general secretary had worked in Fujian for 17 and a half years, and was "full of affection for the mountains, rivers, and plants of Bamin".

Here, he led and promoted the construction of an ecological province in Fujian, which is also an important birthplace of Xi Jinping's thoughts on ecological civilization.

As early as when working in Fujian, Xi Jinping had in-depth thinking about how to achieve economic development and ecological protection in Fujian, which has more mountains and less land.

Standing at the entrance of the village, looking at the mountains and rivers in front of him, he earnestly warned, "Green mountains and green waters are priceless treasures, and mountainous areas should be well drawn with "landscape paintings" and good landscape and field articles.

During this visit to Wuyi Mountain, the general secretary came to an ecological tea garden to inspect the development of the tea industry.

Mountain, there is a big article on industrial development.

Last year in Qinling, the general secretary inspected the Nuwa Phoenix Tea Modern Demonstration Park in Pingli County, and also came to Jinmi Village in the depths of the Qinling Mountains and praised “small fungus has become a big industry”;

In the Simaguang Camellia Garden in Guangshan County, Henan Province in the Dabie Mountains, I learned about the local development of Camellia oleifera planting and processing industry to help poor households get rid of poverty and become rich.

During the inspection in Ningxia, I came to the vineyards under the Helan Mountain to learn about the development of the grape industry...

Mountains are also the carrier of the reform of the ecological civilization system.

This time in Wuyishan, the general secretary came to the Wuyishan National Park Smart Management Center.

In addition to "World Natural and Cultural Heritage", "National Park" is also an important label of Wuyi Mountain.

The establishment of national parks is a major innovation in the reform of the ecological civilization system since the 18th National Congress of the Communist Party of China.

Although it has the word "park", national parks are not simply parks in the general sense for tourists to visit and relax.

The primary goal of establishing national parks is to protect natural biodiversity and the ecosystem structure and ecological processes on which it depends, promote environmental education and recreation, and provide "universal well-being" for present and future generations.

The "14th Five-Year Plan" that has just been implemented further emphasizes: "Building a natural reserve system with national parks as the main body, nature reserves as the foundation, and various natural parks as supplements."

Incorporating "mountains" into the national park system and the focus of ecological civilization construction in the new development stage shows the weight.

Of course, the weight of the mountain alone does not mean that other ecological elements are not important.

The ecology itself is an organic system.

In ecological governance, the general secretary always insists on considering systematic thinking and advancing with a holistic concept.

At the Third Plenary Session of the Eighteenth Central Committee of the Communist Party of China, the general secretary pointed out: "Landscapes, forests, lakes and lakes are a community of life. The lifeblood is in the tree."

During the two sessions this year, the general secretary added another "sand" to this "community of life": "To coordinate the management of landscapes, forests, fields, lakes, grasses and sand, a word'sand' should be added here."

Just as the general secretary's far-reaching plan for the new journey and development during the two sessions:

"Promote the adherence to ecological priority, promote high-quality development, and create an organic combination of high-quality life to complement each other."