"We have our own tasks, we are solving them": Peskov assessed the impact of US sanctions on the implementation of Nord Stream 2

US sanctions against the Nord Stream 2 gas pipeline can complicate the implementation of the project, said Dmitry Peskov, spokesman for the Russian leader. At the same time, he recalled Europe's interest in completing the construction. Earlier, the media published information about the impending sanctions against the gas pipeline. Meanwhile, US President Donald Trump vetoed the country's defense budget, which also included restrictive measures against Nord Stream 2. 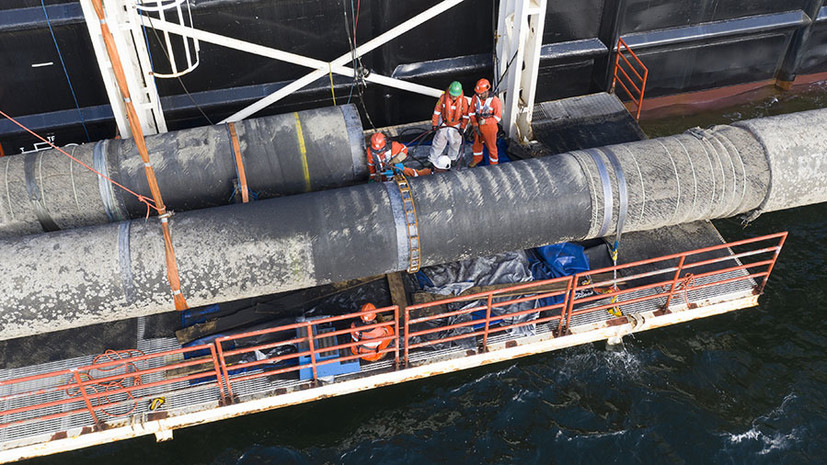 US sanctions on the Nord Stream 2 gas pipeline may complicate the project's implementation.

This was stated by the press secretary of the Russian leader Dmitry Peskov, answering the question of whether the United States has real tools to stop construction.

He noted that the restrictive measures already taken, as well as those included in the yet unapproved draft of the US defense budget for next year, are aimed precisely at making the process of completing the gas pipeline as difficult as possible.

“Of course, it can complicate things,” Peskov said at a briefing with reporters.

At the same time, the Kremlin added that Russia and European partners are interested in the Nord Stream 2 being "finalized in the interests of European consumers and Russian gas suppliers."

“We have our own tasks, we solve them,” concluded Peskov.

Earlier, the spokesman for the Russian president expressed the opinion that the US sanctions against Nord Stream 2 are a manifestation of a hybrid war and an example of unfair competition.

On December 23, it became known that the United States may be preparing an extended package of sanctions against the Nord Stream 2 gas pipeline project.

This information was published by Reuters, citing sources in the administration of the current US President Donald Trump.

The article claims that Washington is preparing to impose sanctions in the near future, which could have a serious negative impact on Nord Stream 2.

“We hit him one crushing blow after another, and now we are preparing to strike at the very heart of the project,” one source told Reuters.

On December 23, US President Donald Trump vetoed a congressional-approved military budget for fiscal 2021.

The head of the White House said he was returning the draft budget to Congress without his signature.

He added that in its current form the document is "a gift to Russia and China."

Trump has previously spoken about his intentions to veto.

The American leader, among other things, disagrees with a section of the communications law that protects social networks from liability for content created by their users.

At the same time, the bill was approved by the US Senate and House of Representatives.

In turn, the US House of Representatives intends to vote to overcome Trump's veto on the draft defense budget.

As a reminder, Nord Stream 2 is two strings of a gas pipeline with a length of over 1200 km each and a total capacity of 55 billion cubic meters per year.

The pipes run along the bottom of the Baltic Sea through the exclusive economic zones and territorial waters of five countries - Russia, Denmark, Finland, Sweden and Germany.

Earlier in December, it became known that the construction of the highway resumed after a break.

According to the press service of Nord Stream 2 AG, the Fortuna pipelayer has begun laying the unfinished section in German waters in full compliance with the permits received.

Subsequently, Gazprom's representatives announced that the construction of the onshore section of the gas pipeline had been completed.

Elena Burmistrova, General Director of Gazprom Export, spoke about this on December 23.

According to her, the deadline for completion of construction at sea depends on a number of conditions, including the weather.

The State Duma called the new threat of sanctions against Nord Stream 2 a "worn-out record."

Sergei Zheleznyak, a member of the State Duma Committee on International Affairs, stated that the United States could themselves get confused in their restrictive measures against the gas pipeline.

“Threats of new“ deadly ”sanctions against Nord Stream 2 from the outgoing Trump administration are already sounding a worn out record.

The United States seems to have got confused about the number and strength of sanctions they are trying to apply against the Russian-European gas project, ”the deputy said.

He noted that Washington is failing to disrupt the completion of the project, in which Russia's European partners are interested.

Note, earlier German Chancellor Angela Merkel said that the attitude of the German government to the Nord Stream 2 project has remained unchanged over the past years.