Traffic jams are severe on the banks of the Loire since the reduction, this summer, of car lanes in favor of bicycles and buses 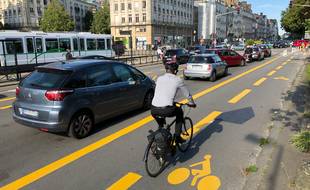 A bus-bike lane (in the center) and a cycle lane have been added to the quai de la posse, to the detriment of automobile lanes.

For the past week, traffic jams have made a very noticeable return around the Quai de la Fosse and the Anne-de-Bretagne bridge in Nantes.

The area, already known for its congestion, seems to be prey to more severe traffic jams than usual, especially in the morning.

Blame it on a reduction in vehicle lanes during the summer: a cycle lane was created in each direction, a shared bus-bicycle lane was also drawn.

“The objective is to calm traffic and make active modes safer,” explains Simon Citeau, deputy (EELV) to the mayor of Nantes.

The Quai de la Fosse needed a real cycling alternative because the banks of the Loire are very popular with pedestrians.

It was also important to build a lane for line 11, which had been diverted since the closure of rue Jean-Jacques Rousseau, as well as for emergency vehicles.

"We put the cart before the horse"

The measure, supported by the Place au Vélo association, is appreciated by cyclists, even if relatively few of them use the new lanes marked out in yellow paint.

“Before, accessing the Quai de la Fosse was very dangerous, it rubbed everywhere.

It will probably encourage those who hesitated to get started, ”defends Bruno, who lives in Chantenay.

"I switched to cycling a year ago precisely to avoid traffic jams, I'm not going to complain about it", laughs Jean-Michel, from Saint-Herblain.

"It's a disaster: one hour from point A to point B instead of the usual 20-25 minutes", plague Randy.

"It makes you wonder if these arrangements are not made to disgust people from coming to town", adds Stéphanie.

“We still put the cart before the horse in this whole story!

No need to have done Science Po to know that dividing the tracks would create a huge mess and obviously would not fight effectively on the already very dense road traffic in Nantes, ”insists Audrey.

"We must leave time for evaluation"

"Deleting two lanes at once, in the middle of summer, in a somewhat complicated area, it's a bit brutal," confirms Emmanuel Danais, departmental delegate of the Automobile club de l'Ouest.

We get the impression that motorists are considered a bit of a plague.

We forget that most do not have the choice to take their car or not.

The deputy mayor recalls that this is only an experiment.

"We will be attentive to the consequences on traffic," he promises.

But we must allow time for evaluation.

He concludes, without losing sight of the municipal objective: “The start of the school year is also a good time to adopt new behaviors, such as changing your mode of travel.

Nantes: From this Monday, the limitation to 30 km / h becomes the rule in town

Nantes: TAN subscriptions will drop by 20% next year