Al-Buraq Revolution.. The first uprising against the Judaization of Jerusalem

Al-Buraq Revolution, the first Palestinian uprising against the attempt to Judaize Jerusalem, broke out on August 15, 1929, and reached its climax on August 23, 1929. 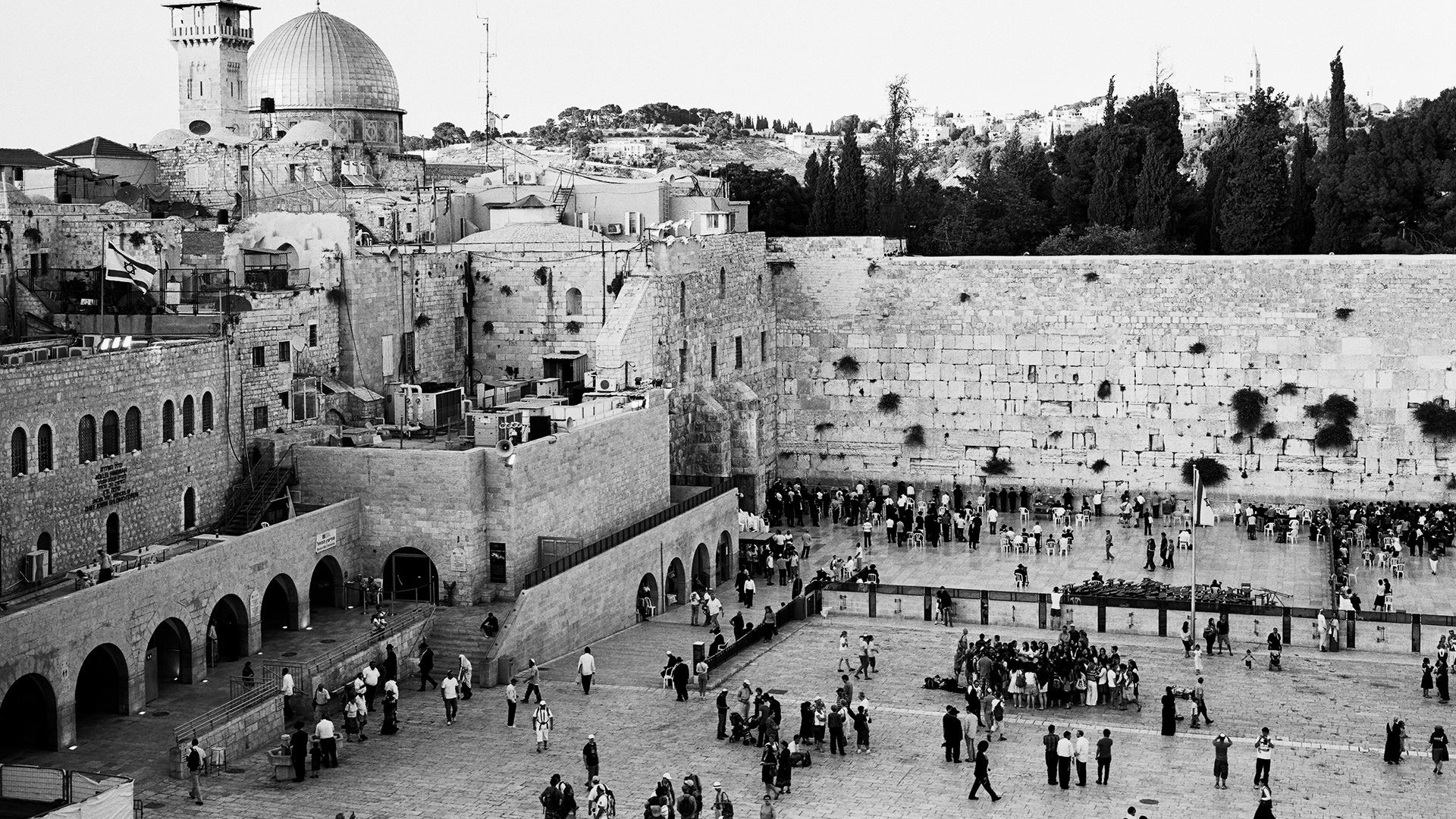 The “Al-Buraq Revolution” was the first Palestinian uprising against the attempt to Judaize Jerusalem during the British Mandate era. Large-scale clashes erupted between Arabs and Jews at Al-Buraq Wall (the western wall of Al-Aqsa Mosque) on August 15, 1929, and the revolution reached its climax on August 23, 1929. Dozens of dead and wounded.

Preludes to the revolution

With the beginning of the 20th century, the British Mandate deliberately changed the features of Jerusalem with the aim of establishing a national home for the Jews in Palestine, with Jerusalem as its capital, based on the Balfour Declaration of 1917.

After about 10 years of British rule, the Zionists organized large demonstrations at the Al-Buraq Wall, claiming that it was a special place for Jews only. This sparked the first revolution of the Palestinians against Britain and the Zionist movement together.

On September 23, 1928, some Jewish worshipers placed benches and tools related to their rituals near the Al-Buraq Wall on the occasion of what they call "Kippur" or "Day of Atonement".

This behavior constituted a breach of the status quo in Jerusalem, which dates back to the Ottoman era, and comes after Zionist attempts in previous years to expand the rights of Jews in the vicinity of the Wall and to purchase buildings attached to it from the Islamic endowments.

On that day, the British police intervened and collided with the Jewish worshipers when they proceeded to remove the seats and other tools.

On October 3, 1928, a delegation of Muslim notables submitted a memorandum to the Acting High Commissioner, Harry Charles Locke, demanding that Jewish worshipers not exceed the rights they enjoyed during the Ottoman era.

Under the pretext of objecting to the behavior of the British police, the Zionists in Palestine and abroad unleashed their protest in order to change the status quo. This aroused the Palestinian leaders’ fear that the Zionist movement’s intention was to take over the Haram al-Sharif area and build a synagogue overlooking the Al-Buraq Wall.

On November 1, 1928, at the invitation of the Supreme Islamic Council headed by Muhammad Amin al-Husayni, a special conference was held in Jerusalem with the participation of 800 Islamic figures from Palestine, Syria, Lebanon and Transjordan.

On November 19, 1928, Colonel Leopold Emery, Secretary of State for Colonial Affairs, announced the "White Paper" which held that the Jewish behavior at the Al-Buraq Wall in September constituted a violation of the status quo, as it was in force under Ottoman rule. The White Paper included a statement that British authorities intend to maintain the status quo.

On December 27, 1928, Hajj Amin al-Husseini, in his capacity as the head of the Supreme Islamic Council, sent a letter to the governor of the Jerusalem District, stating that the Council “hopes that the government will practically implement as soon as possible what was stated in the White Paper regarding the obligation to maintain the current state that was in the era of the Turks.

The Al-Buraq Revolt erupted when the Jews organized a huge demonstration at the Al-Buraq Wall on August 14, 1929 on the occasion of what they called “the anniversary of the destruction of Solomon’s Temple,” claiming that it was a place for Jews only.

On the following day, August 15, 1929, they followed it with a huge demonstration in the streets of Jerusalem, until they reached the Al-Buraq Wall, where they shouted "The Wall is ours", and chanted "The Zionist National Anthem" in conjunction with the insults of Muslims.

British police knew of the demonstration in advance, and sent large forces to escort the Jewish demonstrators.

On the third day, Friday, August 16, which coincided with the anniversary of the Prophet's birthday, Muslims flocked to defend the Al-Buraq Wall, as the Jews intended to seize it, and violent clashes occurred between the two sides that pervaded most of Palestine.

The revolution witnessed clashes between the Palestinians on the one hand and the Jews and the Mandate forces on the other hand in Hebron, Safed, Jerusalem, Jaffa and other Palestinian cities, and they lasted for days.

The confrontations resulted in the killing of 133 Jews and the wounding of 339 others, while 116 Palestinians and Arabs were killed and 232 others were wounded.

After Britain managed to control the situation harshly, it brought to trial more than a thousand Arabs and Palestinians and sentenced 27 of them to death, including one Jew who was a policeman who entered an Arab family in Jaffa consisting of 7 people and killed them all.

The Mandate authority commuted the sentences to life imprisonment against 23 Palestinians, and upheld the death sentence against 3 after they were accused of killing Jews: Fuad Hassan Hegazy, Muhammad Khalil Jamjoom, and Atta Ahmad al-Zir, who were executed on June 17, 1930, in Medina Prison. Acre is known as (the Citadel), and because the three martyrs were executed on Tuesday, it was called "Red Tuesday".

In an attempt by Britain to prevent the recurrence of another revolution, such as the Al-Buraq Revolution, the Mandate Power issued a decree on October 25, 1929, which it called the "Penal Code (Crimes of Sedition)".

The law defines the crimes that are considered sedition against the mandatory power, with the corresponding punishment, and they are:

Following the events of the Al-Buraq Revolution, on January 14, 1930, the Council of the League of Nations decided to form a committee urgently, the names of which were proposed by the British government, and tasked with deciding on "the question of the rights and demands of Muslims and Jews in the Western Wall (Al-Buraq)."

On the first of December 1930, the committee concluded that the ownership of the Al-Buraq Wall belongs to the Muslims, and they alone have the right in kind to it.

She added that Jews had the right to free access to the Western Wall to make supplications (prayers) at all times, subject to a number of conditions.

In fact, the committee approved the status quo that prevailed during the Ottoman era.

On March 12, 1930, the Shaw Commission (a British commission of inquiry headed by Sir Walter Shaw) published its report on the events of the Western Wall, which saw that Zionist immigration and land-purchasing practices were the main cause of the unrest, noting “the double fear of the Arabs that they They will be deprived of their means of livelihood, and one day politically controlled by the Jews because of Jewish immigration and land purchases.”

At the same time, the Shaw Committee expressed its support for the issuance of the Penal Code Decree (Crimes of Sedition) in October 1929, two months after the Al-Buraq Revolution.

On May 2, 1930, the British Colonial Secretary Lord Passfield (known as Sydney W.) sent Sir John Hope Simpson to Palestine in order to consult with the High Commissioner, and to consider on the ground issues of immigration, settlement and development of land.

Passfield intended to appease the protests of the Jews and their supporters, who had expressed their rejection of the findings of the Shaw Commission report, and demanded the formation of a commission of inquiry and follow-up on the issue of land and immigration.

Muhammad Amin al-Husseini was born in Jerusalem, and received his education there before joining the Al-Azhar Mosque in Cairo. He performed the Hajj with his family in 1913 when he was a young man, so he was called “the pilgrim” and this title kept him until his death.

His father sent him to Istanbul in 1915 to study, but he joined the Military College and graduated with the rank of non-commissioned officer, and joined the Arab revolution led by Prince Faisal before the end of the First World War (1914-1918).

At the beginning of the British occupation of Palestine, in 1918 he was appointed as a special companion to the British military governor. He soon resigned from his position in protest of Britain's pro-Zionist policy, and taught at the College of Education in Jerusalem.

He was elected president of the "Arab Club" in Jerusalem, the first political organization in Palestine to oppose the policy of the Balfour Declaration.

The British authorities sentenced him in 1920 to imprisonment in absentia for leading the demonstrations, so he fled to Karak, and from there to Damascus during the Faisali era, but he returned to Jerusalem in the same year after the newly appointed High Commissioner Sir Herbert Samuel pardoned him, and he won the position of fatwa in May 1921, succeeding him. For his older brother Kamel who passed away.

In January 1922, Al-Husseini was appointed head of the Supreme Islamic Council, and the Jews accused him of orchestrating the Al-Buraq Revolution in 1929, but the British government acquitted him.

Sheikh Farhan Al-Saadi, a Palestinian farmer, born in 1856 in the village of Al-Mazar in Jenin in the northern West Bank. He was the first to spark the Al-Buraq revolution in the Jenin district with a group of mujahideen who confronted the British Mandate authority with rebellion and disobedience, so he was arrested and imprisoned for 3 years in Acre prison and Nur Shams prison.

Al-Saadi also played a major role in the outbreak of the 1936 revolution, when he was arrested again and sentenced to death and executed in November 1937.

Atta Ahmad Al-Zir was born in the city of Hebron in Palestine in 1895. He worked in agriculture and actively participated in the Al-Buraq Revolution. He was arrested and tried to death, and the sentence was executed on June 17, 1930 in the castle prison in Acre.

Fouad Hassan Hijazi was born in the city of Safed in Palestine in 1904. He received his primary education in the city, secondary education at the Scottish College, and completed his university studies at the American University in Beirut.

Hegazy participated in the Al-Buraq revolution and was sentenced to death, the first to be executed on June 17, 1930, before his colleagues Muhammad Khalil Jamjoom and Atta Ahmad Al-Zir.

Muhammad Khalil Jamjoom was born in the al-Qazzazin neighborhood in the old town of Hebron in the southern West Bank in 1902, where he learned to read and write in al-Katatib in the late Ottoman era (1516-1917), then completed his university studies at the American University in Beirut.

Muhammad worked with his father from a young age in trade between Palestine and Egypt, and at that time he relied on camels to transport goods.

Jamjoom was preparing to marry at the end of the summer of 1929 with one of his neighbors, but the British Mandate arrested him on August 27, 1929, days before his wedding date, and he remained in detention until his execution on June 17, 1930.