China News Entertainment, Beijing, April 12 (Reporter Wang Shiyao) In the play, he was an upright and heroic Sir, a thief in the game world, and a father whose life was stolen by time; "As the true meaning of life, self-discipline is the norm in his life.   He is Ren Dahua. Poster for the movie Edgewalker. Photo courtesy of the interviewee   "Love and righteousness" is the "essence of Hong Ko 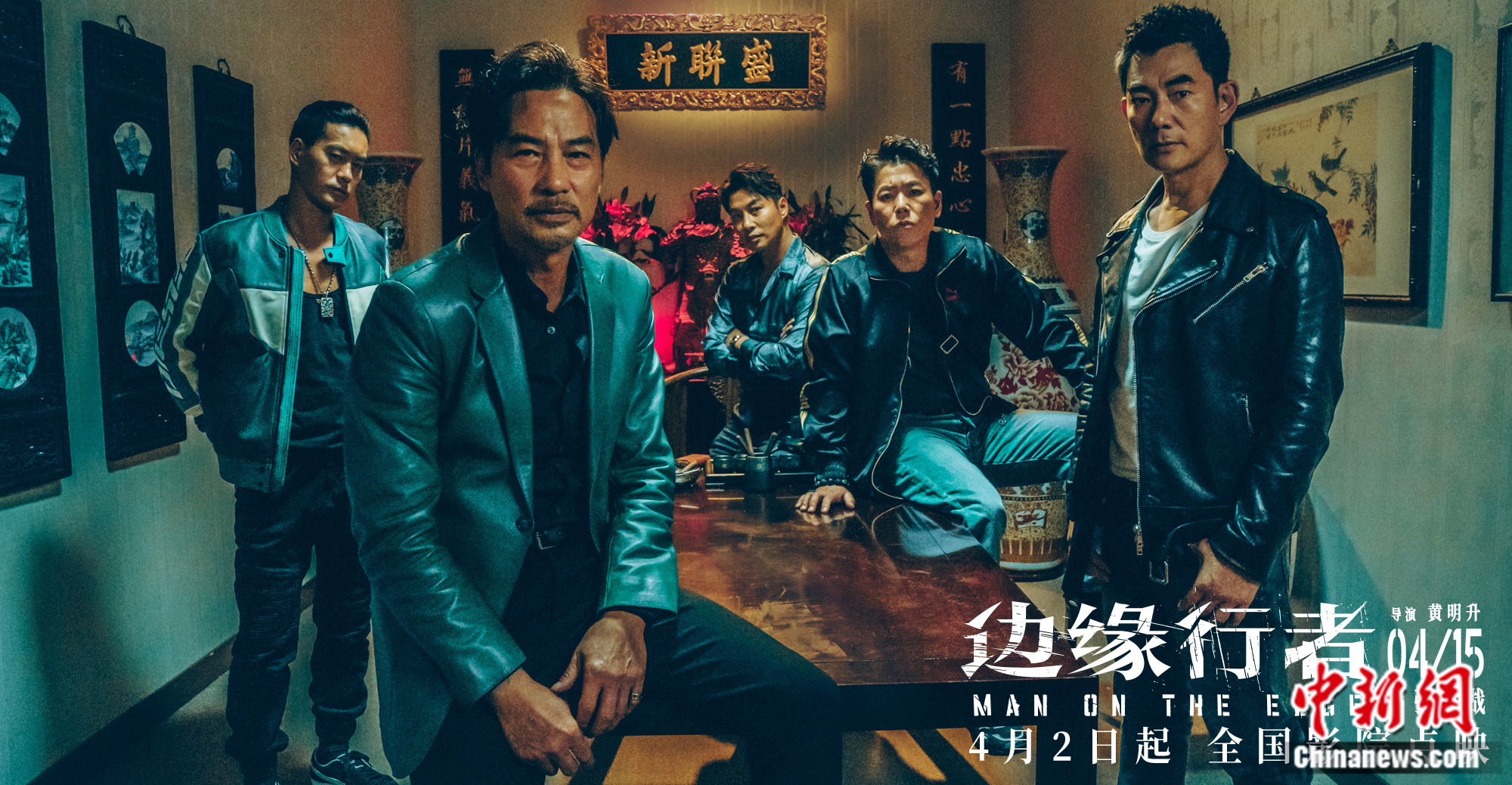 China News Entertainment, Beijing, April 12 (Reporter Wang Shiyao) In the play, he was an upright and heroic Sir, a thief in the game world, and a father whose life was stolen by time; "As the true meaning of life, self-discipline is the norm in his life.

He is Ren Dahua.

Poster for the movie Edgewalker.

"Love and righteousness" is the "essence of Hong Kong films" as understood by Ren Dahua.

In the movie "Borderwalker", he plays Lin Yaochang, the club boss, who is an "atypical" elder brother.

Different from other films that focus on portraying the viciousness and viciousness of the gang leader, Ren Dahua wants to express Lin Yaochang's "love" and "righteousness".

In Ren Dahua, you can clearly feel the precious qualities preserved by Hong Kong actors in the last century: professionalism and dedication.

In order to capture the real reaction of the actors, in line with the character of Lin Yaochang, he carefully designed two "slap" scenes in the play, and did not inform the opponent actors-Ren Xianqi and Tan Yaowen in advance.

Poster for the movie Edgewalker.

Ren Dahua, who was a model, seems to be as ordinary as breathing to maintain a perfect figure. Self-discipline is his daily life.

2000 times of skipping rope every day is not a problem for him, running, playing football, playing table tennis... Various sports enrich his off-screen life.

Ren Dahua, who loves food, will also check in the food shop with his wife when he is resting. Although he only dares to taste a little bit of everything, even so, he is very satisfied.

Talking about the secret of keeping love fresh, Ren Dahua told a reporter from Chinanews.com, "Simple is the best."

After playing many complicated, tangled and painful roles in life, he realized that "simplicity" may be the true meaning of life and the code of happiness.

Chinanews.com: What was the opportunity for you to take on the role of "Edge Walker"?

One of the things that attracted me to this drama was the attitude of this "big brother" towards drugs.

Because the Chinese have experienced the pain of the Opium War, we should not have such a thing as drug trafficking. "So I told the screenwriter that we must write well on this point - that is, drugs can't be touched, it is harmful to all people."

There are a few lines in the play that are well written, "In our world, people must have a sense of responsibility, obey the rules, be moral, and can't touch drugs, and there is a dramatic effect in it."

Chinanews.com: This time you and Ren Xianqi cooperated for the third time. Will the cooperation be more tacit? Do you have any interesting stories to share?

Actually, when I was filming with him, I didn't meet him in the first two films (laughs), but I am very familiar with him, "Because he started as a singer, I watched him grow, and I used to be with him before. I've made record jackets, so watching him sing and watching his latest filming, I think he's improved a lot, he'll get better and better, and he's a good guy."

During filming, we discussed what clothes to wear every day, because Ren Xianqi used to be a singer, and then I dressed quite avant-garde (laughs), so we would discuss these things.

Then we will also discuss eating authentic snacks in Hong Kong, "Today you treat, tomorrow he treats, the day after tomorrow, I treat him, and the day after tomorrow he treats him. So the staff is the happiest, there are many things to eat every day, such as fish balls, Pineapple buns, Hong Kong milk tea, everything, every day is very happy, just like our brothers, it is a family feeling."

Chinanews.com: Ale, who you played in "Dragon City Years" before, was also a big boss. What are the differences with Lin Yaochang who you played this time?

Ah Le of "Dragon City Years" should be a Scorpio, and the character of Scorpio is that he will be more black-hearted and hold grudges.

Lin Yaochang should be a Pisces, with a strong sense of love and righteousness, and a dual personality.

On the one hand, he has some romantic feelings for the members, and sometimes he has a lot of fun with them; but at the same time, he also has a red line, that is, he can't touch drugs, and no one can violate this red line.

Chinanews.com: Which is the most impressive scene?

Every scene is very impressive, but the most impressive scene is the two slap scenes.

I slapped Tan Yaowen because his character sold drugs and touched my red line, which I didn't allow.

I slapped Ren Xianqi. It was the final ending. I wanted him to wake up and not die.

In the play, my eldest brother often tells them that in my world, one must have a sense of responsibility, abide by the rules, and be moral before becoming my member, otherwise you will leave.

So, one of them hit the red line and one didn't, and I hit both (laughs).

Both of them were surprised because I didn't tell them in advance.

I only secretly told the director, the cameraman and the assistant, "As far as we know, it's best not to NG, you two machines, pay attention to a little bit, neither of them know that I will hit him, please. you."

(Reporter: How did they react when they were beaten without knowing it?)

In fact, this is the truest response.

Chinanews.com: Some netizens commented that this film has a "90s Hong Kong film" style. What do you think is the core of "Hong Kong film essence"?

Very dynamic, very responsible, very moral, and brotherhood, these are typical Hong Kong films in the 1990s, "feeling and righteous, responsible and moral."

Chinanews.com: We know that you are a fan of many athletes. Would you like to act in a sports-themed movie?

I hope to play, preferably to play table tennis. I am also a member of the Hong Kong football star team. I used to play football and tennis... I like to play any kind of ball, and I like to watch it even more!

The table tennis match made my heart skip a beat.

If you want to act, I think being a coach is the most fun.

And to be a coach must be affectionate and righteous, have a sense of responsibility, and have rules.

Chinanews.com: What's your secret to maintaining a perfect figure over the years?

can only do more exercise.

Now I skip rope every day, about 2,000 times a day, as well as playing table tennis and running.

In the past two days in Hong Kong, it has been 28 degrees, and I will bask in the sun, skip rope, do sports, and sweat.

Chinanews.com: We are all envious of the relationship between you and your wife. How to make love last longer?

Simple is the best, don't be so complicated, just be simple.

We will watch movies together, go shopping together, do sports together, and taste food together.

My wife is very knowledgeable about food, so she will take me to eat different food, but I can't finish each meal, because I eat very little, I don't dare to eat so much, and I try a little bit of each one.

"But let me tell you, Hong Kong food is really delicious, and the Sichuan boiled fish is so delicious, I still want to eat it now when I think about it." (End)