This video of "Thank you Nanjing" became popular: the thanked "big whites" cried

China News Service, Nanjing, April 7th (Reporter Shen Ran) "Thank you Nanjing!" "Come on Shanghai!" Recently, a video shot in the Shanghai community on the evening of April 4 has been circulating on the Internet. In the video, two buildings Residents in Shanghai expressed their thanks in unison to the two "big whites" standing on the lawn in the center of the community. The scene was not only sp 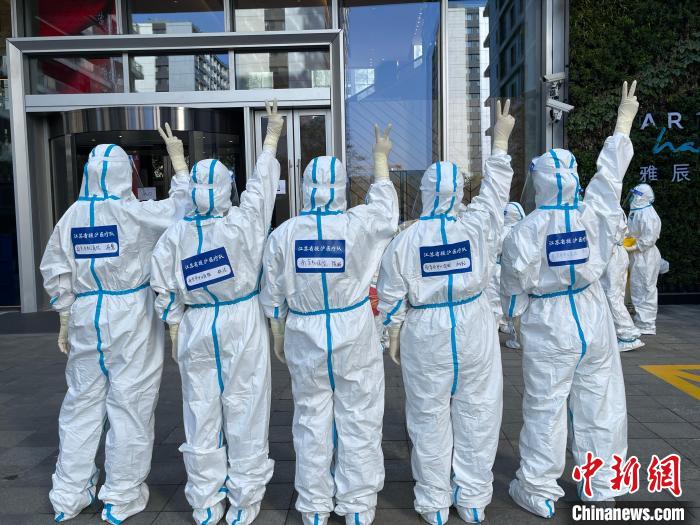 China News Service, Nanjing, April 7th (Reporter Shen Ran) "Thank you Nanjing!" "Come on Shanghai!" Recently, a video shot in the Shanghai community on the evening of April 4 has been circulating on the Internet. In the video, two buildings Residents in Shanghai expressed their thanks in unison to the two "big whites" standing on the lawn in the center of the community. The scene was not only spectacular but also touching.

On the 6th, a reporter from Chinanews.com found the "Dabai" from Nanjing who supported Shanghai in the video, and told the scene of the "fight" in Shanghai on the 4th.

The "big whites" from Nanjing are sticking to the "front line" of Shanghai's anti-epidemic.

In the past few days, a steady stream of medical support teams from all over the world have rushed to Shanghai to fight the epidemic.

"Su Daqiang", which is close to Shanghai, is even more obliged.

Jiangsu Province has sent a total of more than 14,000 "white-clothed guards" consisting of sampling teams, testing teams, and cabin teams to support Shanghai.

The Nanjing "Dabai" that was thanked by Shanghai citizens this time came from the sampling team.

The "big whites" from Nanjing who stayed up all night and went to Shanghai left their fatigue and difficulties to themselves, and their smiles and kindness to their Shanghai compatriots.

After the nucleic acid sampling in Shanghai on April 4, a video shot in a community in Shanghai that evening went viral on the Internet.

In the video, the lights on the two buildings flickered, and the residents in the buildings shouted "Thank you Nanjing" in unison, and thanks to the two "big whites" standing on the lawn in the center of the community, not only the voices of the elderly, but also the children. The childish voice of a child is touching.

"Although it was very hard from early morning to late night that day, when I think of this scene under the sunset, I feel that no amount of hard work is worth it!" Tang Liping, head nurse of the Department of Geriatrics, Nanjing Central Hospital, told reporters that the two in this video " Dabai" is himself and his colleagues.

"I received a call at 1:00 a.m. on the 4th to urgently support nucleic acid sampling in Shanghai on the 4th. It seemed that I had been waiting for the hospital's call that night, and I rushed over when I heard the call without taking anything."

In the past few days, a steady stream of medical support teams from all over the world have rushed to Shanghai to fight the epidemic.

"After arriving at the hospital, everyone was nervously preparing anti-epidemic materials, equipment and logistical materials." Before leaving, Tang Liping remembered what the hospital leader said, "'We are here to support Shanghai, so bring what you can bring with you. , bring as much as you can, and don’t add a little burden and trouble to Shanghai.” Many colleagues have already thought about it before they set off, eat less and drink less, try not to take off protective clothing, all the time They are all used for nucleic acid sampling. This is a tough battle, and we have to win it!"

The epidemic situation in Shanghai is severe, and the neighboring "Su Daqiang" is bound to do so. Jiangsu Province has sent more than 14,000 "white-clothed guards" to Shanghai.

Starting at 2:00 a.m. on the 4th, the support team that went overnight from Jiangsu arrived in Shanghai early that morning. More than 10,000 "big whites" from Jiangsu quickly dispersed to their respective locations to start a whole day of intense work.

"It was a race against time. We were only at the site with my colleague Wu Jing, who were responsible for nucleic acid sampling of residents in several buildings. They sat and didn't move all day." Tang Liping recalled, "So, at 5 p.m. When we basically finished our work, a volunteer from the community came to us and said, please go to the lawn in the middle of the community. The residents have something to say to us. I am still wondering what the residents need to know? As a result, as soon as we walked over, without waiting for a few minutes, a deafening sound of thanks suddenly sounded from the surrounding upstairs, and the lights in the window flickered under the setting sun, and the sound of 'Thank you Nanjing' continued to surround us for a long time. 20 minutes. At that time, we couldn't stand it anymore, and both of us cried. At that moment, everyone around us, from top to bottom, was shouting 'Thank you Nanjing'."

The gratitude and affection of Shanghai residents warmed the hearts of the "Dabai" people.

"My colleagues and I were also so excited that we kept shouting 'Come on Shanghai', but unfortunately the voice was too low, and we were drowned in the huge thank you, and we couldn't hear our own voice at all. I still can't forget the warmth and gratitude of that moment. , the fatigue of the day seems to have disappeared. I am really grateful for everyone's 'thank you'." Tang Liping remembered the scene at that time, and was still a little incoherent with excitement.

A video of residents of a community in Shanghai "Thank you to Nanjing" went viral on the Internet, and the two "big whites" surrounded by thank you were medical staff from Nanjing.

"This time to support the nucleic acid testing in Shanghai, most of the nurses sent by our hospital are front-line nurses, and many of them have just completed the multiple nucleic acid sampling work for this round of epidemic in Nanjing, and immediately volunteered to sign up to join the medical team in Shanghai. It can be said that, The city has pressed the pause button, but our medical staff have been on the road." Li Weihong, deputy director of Nanjing Central Hospital, as the team leader of the hospital's medical team in Shanghai, told reporters, "On the 4th, I didn't sleep almost all night. Under the circumstances, the members of the medical team only ate a little dry food and drank a little water, and insisted on non-stop nucleic acid sampling all day long. The last team members did not finish sampling until nearly 10 o'clock that night and returned to the assembly point. The team members took off their protective clothing and couldn't wait to drink a few large glasses of water, their faces were covered with red marks from the protective masks."

"Although everyone has worked hard, the warmth given to us by the residents of Shanghai has also made every one of our colleagues remember and unforgettable." Li Weihong said with emotion, "The residents of Shanghai are very polite, and they will give us thank you gestures and gestures after the nucleic acid is completed. Bow. There are also some children with stickers that say 'Thank you to my brothers and sisters in Nanjing'.

We can feel the warmth even if we cannot speak through protective clothing and masks.