Executors of al-Assad.. A German court tries a Syrian doctor, and the platforms demand the prosecution of the rest

The Regional High Court in Frankfurt, Germany, started the first session to try a Syrian doctor loyal to the regime of President Bashar al-Assad on charges of crimes against humanity while working in Syria. 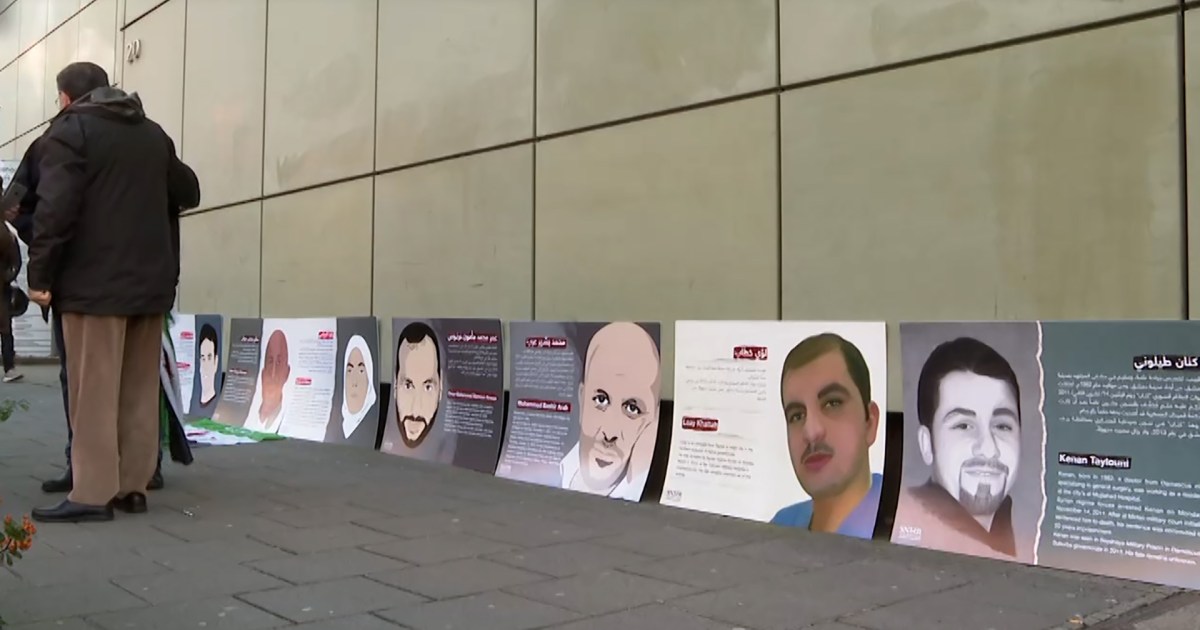 The eighth bulletin - your publication (19/1/1922) monitored the interaction with the news, where the German Public Prosecution charged the doctor with 18 charges related to torturing activists and detainees during the years 2011 and 2012 in Homs and Damascus, and the activists interacted with the case by using the hashtag "Searching for Assad's Executors".

The investigative investigation "Search for the Executors of Assad", which was carried out jointly between Al-Jazeera and the German "Der Spiegel", revealed the crimes committed in the Homs Military Hospital, which led to the doctor's arrest and trial.

Activists and human rights activists gathered outside the court building at the start of the doctor's court in the Regional High Court in Frankfurt, carrying plates of medical staff who were forcibly disappeared by the Assad regime.

In turn, Fadel Abdel-Ghani, director of the Syrian Network for Human Rights, expressed his pain when he uploaded pictures of his hidden friends, writing, "It is a painful feeling to carry a picture of your forcibly disappeared friend and colleague with the Syrian regime. The Frankfurt court charges him with torture and murder."

While activist Yasmine Al-Marawia expressed her shock at the transformation of doctors in the Assad regime into criminals, she said, "(Assad's executioners) we never realized that someone who bears the name of a doctor can be a thug. In Syria, the names change under Assad's rule. Everything became possible, as his doctors gave A new term for the world to call them, which is criminality and his participation in torturing detainees instead of being in the first row with them.

Basil Al-Battah confirmed his joy at the start of the trial. He tweeted, "What was hidden was much greater than the joy of trying this criminal, as much as the pain I feel when I know that senior officials of the Assad regime and its criminals are still at large and continue to commit their crimes."

Khalaf Muhammad believes that the new year is a good year for the Syrians, so he wrote, “Al-Assad’s executioners, at the beginning of the new year, the Syrians will welcome their year with news that rejoices their hearts with the issuance of the life sentence against the so-called Anwar Raslan, and the week did not (end) until the reputation of the trial of the criminal became known… We hope from God Almighty that It will be the year for all of Assad's executioners and his sectarian gang to be held accountable."

As for Amer Abdel-Razzaq, he called for the criminals to be legally stripped because they are gang members. He tweeted, “One of the big mistakes we make is to attribute the shabiha from the People’s Assembly, doctors, lawyers and judges to Syria, as is the case with the criminal doctor shabiha, and we call him this Syrian doctor the criminologist, killers and criminals. Gang doctor.

While Renad Sheikho demanded justice for the victims of Assad's doctors, she wrote, "This sadistic brutality we see only with Assad's doctors, his crimes shook the human conscience, pouring alcohol on the genitals of children and burning them, hanging the detainee on the ceiling and pouring a highly flammable liquid on him and burning him, justice for these detainees for their pain." because they shrieked for their screams."