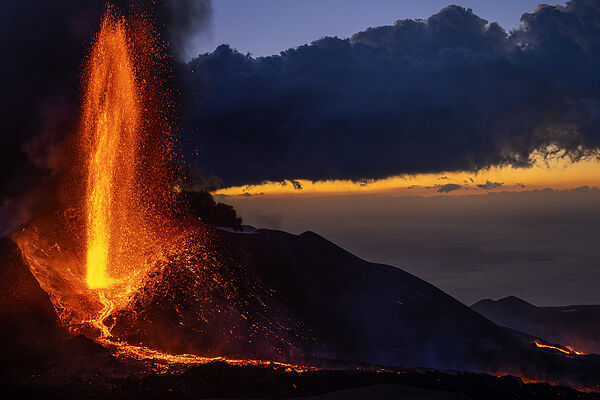 Technical director of the Emergency Plan Volcanic Canary Islands (Pevolca), Miguel Angel Morcuende, has indicated that the lava from the

a good number of houses

The emission of sulfur dioxide in the volcano plume remains high and reflecting a downward trend since last September 23, and the diffuse emission of carbon dioxide shows a stable trend since November.

and regular in Los Llanos de Aridane, Puntagorda and Tazacorte due to the presence of sulfur dioxide, and due to the accumulation of particles of less than ten microns it has been unfavorable at some point in the La Grama station. -Breña Alta.

The seismicity of the La Palma volcano remains low and localized

Regarding seismicity, the scientific spokesperson for Pevolca, Carmen López, has declared that it is still low and is located in the same areas, with a maximum magnitude of 3.9 in the last 24 hours, reports Efe.

The tremor continues at medium and low levels with less variability than previous days, and there are no trends in the deformations of the ground, so there is stability, except in the station furthest from the volcanic cone, in which there is a slight deflation. Carmen López has pointed out.

Secondary cone cracks and bills do not compromise volcano stability

The scientific spokesperson for Pevolca, Carmen López, explained that the existence of cracks and fractures in the secondary cone of the volcano had been found, and added that

, but they would have a "quite" local effect. Therefore, for the moment, the stability of the volcanic building is not compromised, reports Efe.

Carmen López has also pointed out that the wind continues in a northwesterly direction, with gusts of 50 and 55 kilometers per hour, with a predominance of the east and south component, so that the orientation of the volcanic plume will continue to favor air operation.

An entry of a humid mass is taking place, with which weak rains could occur and the forecast is that on Tuesday the intrusion of dust from the desert or haze will increase, which in this case will favor an increase in the presence of PM10 particles.

The technical director of the Canary Islands Volcanic Emergency Plan (Pevolca), Miguel Ángel Morcuende, has pointed out that as a result of the volcanic eruption there are

, two more than on Sunday, and of them 410 are in Fuencaliente, 71 in Los Llanos de Aridane and 75 in Breña Baja, and 43 dependent people are in social health centers on the island.

The area affected by volcanic lava is the same as on Sunday, 1,155 hectares, reports Efe.

now has less power than those that move through the center, while that of the south is stopped.

This information was provided this Monday by the technical director of the Canary Islands Volcanic Emergency Plan (Pevolca), Miguel Ángel Morcuende, and the scientific spokesperson for Pevolca, Carmen López, who have indicated that the greatest movement of lava occurs in the central area. , a large part of it through lava tubes, so it is not seen on the surface, reports Efe.

start of the volcanic eruption in Cumbre Vieja

, the most relevant thing is that in the southern area of ​​the affected area on Sunday there was no possibility of access due to the harmful gas concentration.

During the night the values ​​of these gases have not been dangerous,

except in the area of ​​Puerto Naos and La Bombilla

The before and after of La Palma with photogrammetric images

Map viewer before and after La Palma (interactive)

The sound of the La Palma volcano

On the occasion of today's celebration of Constitution Day, the PSOE has ensured that the defense of the Welfare State is a constitutional mandate to which all political forces must respond.

"The fundamental thing is that this achievement, this milestone in our recent history, was not the result of an imposition," added the socialist party.

This year, in which 43 years have passed since the promulgation of the Spanish Constitution, the Socialists have assured that it has made them reaffirm their "values", their "principles" and "their methods". "The health, economic and social emergency of the pandemic, as well as other natural crises, such as

the eruption of the La Palma volcano

, have served us to test what really

makes us strong: our Welfare State"

It appeals not to forget that the Welfare State "is nobody's heritage", but rather

that must be protected and improved.

"That Welfare State, solid and more necessary than ever, is founded on the 1978 Constitution, whose anniversary today we celebrate," has settled.

The lava from Cumbre Vieja continues due to the new fissures that have emerged in recent days and are affecting new surface of homes in an area already evacuated, according to Europa Press of the latest report from the Department of National Security.

The affected area is estimated at 1,155 hectares with a maximum width of 3,350 meters, and the total extension of the lava deltas is maintained at 48.03 hectares.

In addition, the decrease in the number of intermediate earthquakes continues and the deep seismicity remains at low values, as well as the tremor that continues at medium-low values, with greater stability.

Regarding the air quality due to sulfur dioxide (SO2), this Sunday the levels remained between reasonably good and regular in almost all the stations of the island.

Regarding the meteorological scenario, it is expected that the orientation of the ash plume and SO2 will continue to be towards the west-southwest from the eruptive focus, so the expected arrangement of the ash cloud represents a favorable scenario for aeronautical operations.

The amplitude of the volcanic tremor signal at Cumbre Vieja remains at low levels and is just as stable as in previous days, according to Europa Press of the latest report on the eruption of the National Geographic Institute (IGN).

The island's network of permanent GNSS stations does not show a clear trend in the deformation of the stations closest to the eruptive centers and the slight deflation possibly related to deep seismicity has stabilized in the rest of the stations, except in LP01. which continues to register it.

Since the last update,

a total of 29 earthquakes

on the island of La Palma

, 3 of them felt by the population and the one with the greatest intensity is III-IV on the night of this Sunday, at 11:57 p.m., of magnitude 3.9 in Fuencaliente and 14 kilometers deep.

Seismicity continues under the central area of ​​Cumbre Vieja in the same areas of previous days, with 28 of these earthquakes located at

depths between 9 and 17 kilometers

and only one at depths greater than 30 kilometers.

is estimated at a height of about 2,500 meters and in a westerly direction.

The volcanic eruption of La Palma has entered its twelfth week with a decrease in earthquakes both in quantity and magnitude and with a decrease in tremor and the emission of gases, but scientists point out that it is early to speak of an end as long as these drops are not persistent, reports Efe.

Cumbre Vieja, in eruption since September 19, 2021

One of the many images left by the eruption of the Cumbre Vieja volcano, on La Palma.

Fourteen earthquakes in the early hours of Monday on La Palma, with a maximum magnitude of 3.5

The National Geographic Institute (IGN) has registered 14 seismic movements in La Palma during the early hours of this Monday, and

, occurred at 8.23.33 hours in the municipality of Fuencaliente and 14 kilometers from depth.

The highest magnitude has been the last of those located during the first hours of this Monday, while the first occurred at 00.48.08 hours in the same municipality, 10 kilometers deep and with magnitude 2.4, reports Efe .

Of the 14 earthquakes this morning, 11 have been located in

, the latter municipality in which the volcanic eruption began on September 19, and in which this Monday occurred, At 6:16 am, the earthquake was shallower, 3 kilometers, with a magnitude of 2.3.

of the earthquakes this morning have ranged

The Geological and Mining Institute of Spain (IGME) has reported that large-opening cracks have been detected in the main cone of the La Palma volcano.

This phenomenon is currently being monitored by experts to determine its causes and possible consequences.

and lava flows through a lava tube, which has several jameos, of which depart two casts moving west on previous casts.

Similarly, yesterday, Saturday at noon, several emission centers associated with east-west fissures to the west of Montaña Cogote were opened, from which several very fluid and degassed flows have started.

These flows are moving at high speed to the west, over previously unaffected terrain, currently reaching near the cliff in the Las Hoyas area.

The La Palma volcano shows no signs of going off: new mouths appear in lower areas

The technical director of Pevolca has indicated that there are a series of emission points in the vicinity of the fissure, and in recent days mission centers have emerged at lower levels than the previous ones.

There is also an "important" lava flow in the central area of ​​the streams, which enters from and into lava tubes that are probably reflected in streams 4 and 7.

Miguel Ángel Morcuende has also referred to the continuing with clear problems "in the matter of gases, especially in the southern area of ​​the emergency, where there are high values, which has caused that this Sunday access to the neighbors.