Muhammad Malhas has always dreamed of becoming a pilot, but his circumstances did not allow him to do so... The 76-year-old Jordanian decided to build a cockpit in the basement of his house to fulfill his dream of flying on virtual flights from home. According to Malhas, a retired who worked for 35 years in the management of private hospital established by 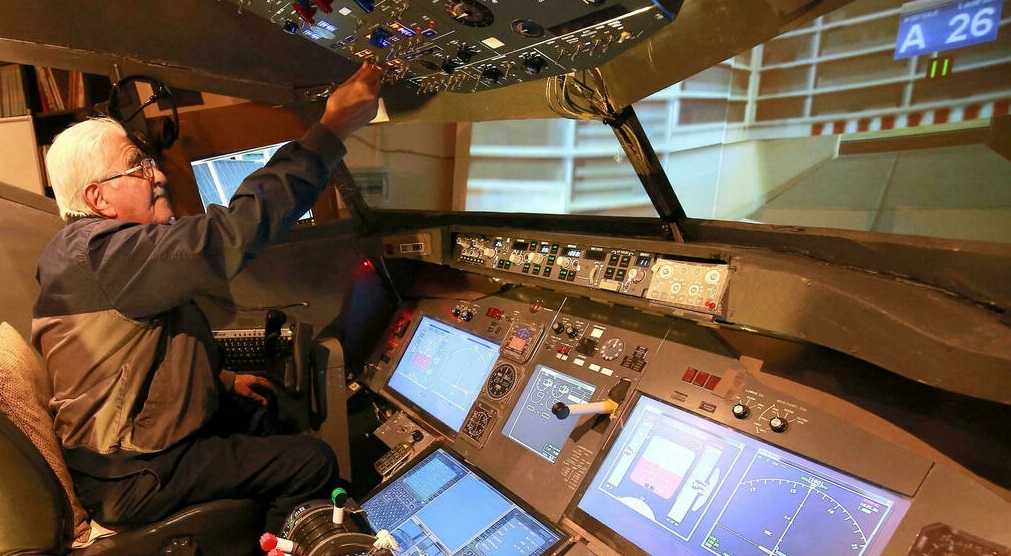 Muhammad Malhas (76 years) from inside the cockpit of a plane he built in the basement of his house in Amman.

Muhammad Malhas has always dreamed of becoming a pilot, but his circumstances did not allow him to do so... The 76-year-old Jordanian decided to build a cockpit in the basement of his home to fulfill his dream of flying on virtual flights from home.

"Since time immemorial, man has been watching birds in the sky and dreaming of flying freely," retired Malhas, who worked for 35 years in managing a private hospital established by his father in Amman, told AFP.

In the basement of his home, where models of miniature planes hung on the walls and his library filled with books about aviation, "Since I was 10 years old when I used to play with my classmates on kites during the school summer holidays, I used to say to myself: How can these papers fly so high in the sky, Since then I have had a desire and love to fly."

He continued, "My heart was always hanging in the sky and my dream was to become a pilot, but circumstances did not allow that, but the passion remained in me throughout my life."

Thus, despite his preoccupation with hospital management after graduating from the University of "City of Westminster College" in London in 1969, where he studied hospital administration, Malhas continued to pursue his hobby and read books related to aviation.

And in 1976, Malhas joined the Royal Flying Academy to learn to fly a small "Piper" single-engine plane, and he was flying at dawn before heading to work in the morning in the hospital.

Then he joined the Royal Paragliding Club for nearly a decade and used to fly a glider every week.

After 2006, Malhas flew virtually through electronic flight programs, then joined a global organization called "Virtual Traffic Stimulation" that helps him fly in almost real conditions with an air traffic controller guiding him.

"We were a group of about 30 to 40 flying friends from different countries of the world talking to each other and flying virtually in our spare time," he says.

Malhas explains that "it is like deceiving the brain, by looking you feel as if you are flying in the sky, but you are in fact sitting in a safe environment relaxing on a chair inside your home away from dangers."

Despite all this, Malhas did not feel the real pleasure of flying in front of a computer screen, so he decided to make a cockpit that simulates the interior design of the cabin in a Boeing 737-800 to feel more realistic, in the basement of his home in the upscale neighborhood of Dabouq, west of Amman.

He bought everything from the local market.

He also got the chairs in the cabin from the scrap market, which were from a bus.

He placed in front of him three large screens to feel immersed in his surroundings, through video clips designed to coordinate with his movements to appear as if he was in real flight in the air, where the sky, clouds, land, rivers, forests and deserts.

It can also determine the weather during the flight.

The project took three years to complete, with the help of a number of his friends from electronics and electrical engineers, at a cost of more than six thousand dinars (8,460 dollars), enabling him to experience the flight experience in all its details and merits.

- “A forum for aviation enthusiasts.”

Ahmed Fares, 25, a mechanical engineer and friend of Malhas, who is updating cockpit systems, says, “I am working on replacing the keys, clocks and indicators with modern ones to make them respond to the condition of the plane so that it looks like it is real when flying in the virtual.”

Fares, who got to know Malhas during group virtual flight tours, adds that "when you are finished, the indicators will read the altitude, engine thrust, fuel, and the work of the wings so that Malhas feels that he is on a real plane."

"This cockpit has become a forum for aviation enthusiasts, where sometimes aviation students come to fly from it and enjoy flying around the world," Malhas says.

"I think it's great to take a flight while sitting in your home safely and feel the joy of flying around the world," he adds as he prepares to take off on a virtual night flight from Amman to Paris.