Chinanews.com, Chengdu, November 24th, title: "Post-90s" grave guard girl in Nanchong, Sichuan: Will continue to tell the red story of Changping Mountain   Author Zhu Huan Li Guo Zhang Liang   In the early winter of the early winter, when walking into the Changping Mountain Martyrs Cemetery, the red five-pointed star on the tombstone of the martyrs glowed against the sun. Feng Lian, a "post-90 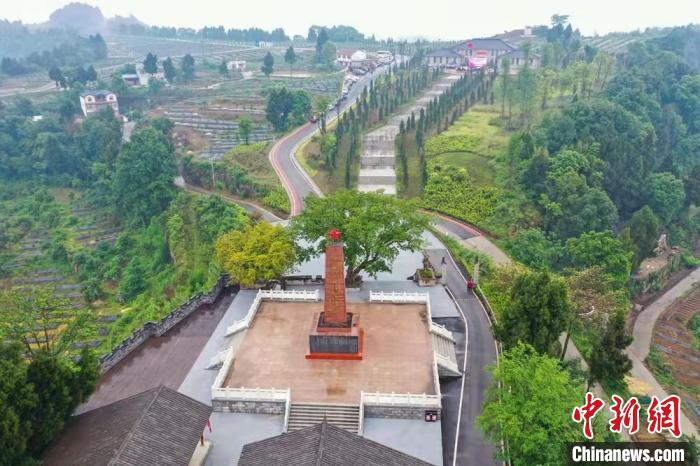 In the early winter of the early winter, when walking into the Changping Mountain Martyrs Cemetery, the red five-pointed star on the tombstone of the martyrs glowed against the sun.

Feng Lian, a "post-90s" girl in Nanchong City, Sichuan Province, took a broom and dustpan, walked to the martyrs cemetery behind the house as usual, and cleaned fallen leaves and tombstones with her father.

Not long ago, Feng Lian told the red story of Changping Mountain to audiences all over the country through a 10-minute speech in the special program "Walking Flag, Power of Belief."

Located in the south, at the junction of the three counties of Langzhong and Yilong, Changping Mountain, surrounded by cliffs, is easy to defend and difficult to attack.

In August 1933, the Fourth Front Army of the Red Army conquered Changping Mountain in one fell swoop and established the Political Department and the forward combat command post.

"During the strategic shift of the Red Army, a company commander surnamed Liu took the initiative to ask Ying to stay at Changping Mountain to cover the transfer of the large forces." After more than 80 years, the story of the Red Army has been passed down by the common people.

In the days when he was stationed in Changping Mountain, Company Captain Liu often went to the home of Chen Xiukun and his wife at the foot of the mountain to carry water and firewood. The childless Chen Han regarded him as his biological son.

After Liu's sacrifice, Chen Han, together with her husband and relatives, secretly carried Liu's body back home, placed it in a coffin originally prepared for him, and buried it next to the old house.

While Chen Han was still alive, she urged her husband Chen Xiukun to adopt a child and keep the tomb of Company Captain Liu for generations to come.

When Chen Han passed away, there was no coffin. The family nailed a wooden box to place her in a wooden box and buried her next to Captain Liu.

Since then, it has become the mission and responsibility of this family to guard the tomb of the company's chief Liu.

In the fourth year after Chen Han's death, Chen Xiukun adopted a boy from the Feng family and named him Chen Zhongmin.

In 1971, when Chen Xiukun passed away, Chen Zhongmin inherited the will of his adoptive father and took over the important task of guarding the tomb of Company Liu.

In 2002, when Chen Zhongmin was still alive, he once again urged Feng Lian’s father, Ma Quanmin: “The Red Army Commander Liu is the benefactor of our family. It is the family rule set by the older generation to guard his grave. No matter where he is poor or rich, no matter where he is. Forget this.” That year, Ma Quanmin and his wife Feng Xiuqiong returned to their hometown and continued to guard the tomb. They have never left Changping Mountain since then.

In Feng Lian's memory, the family conditions were fairly good during those years when his parents worked in Guangdong.

Ever since his father Ma Quanmin obeyed his grandfather's instructions and returned to Changping Mountain to guard the tomb, life has become difficult.

"Even though the conditions are difficult, the family's determination to guard the tomb has never wavered." Feng Lian said.

There is a tradition in Feng Lian’s family that before having a reunion dinner for the New Year, one must first offer sacrifices to the heavens and the earth, sacrifice to the heroes and ancestors, and then eat after the sacrifices.

At that time, Feng Lian could almost only eat meat during the Chinese New Year, but the grandpa would put a piece of meat in front of the tomb of Lien Liu. In addition, he would also offer fruits and flowers.

In 2008, Captain Liu’s tombstone was a bit weathered, the stone cracked, and the writing became blurred. Therefore, Ma Quanmin and his wife replaced Captain Liu with a new tombstone.

On the stele are written in red letters "Liu Company Tomb of the Red Army" and "Revolutionary Martyrs, Immortal". The four corners of the tomb of Company Liu are also planted with evergreen cypress trees.

No one knows what the full name of Company Captain Liu in the tomb is.

But four generations of Feng Lian's family have been guarding him silently for nearly 90 years.

In 2011, the Nanbu County Government built the Changpingshan Martyrs Cemetery near the cemetery of Lianchang Liu, and successively moved the southern martyrs in for future generations to pay their respects. There are now more than 1,000 tombstones.

In addition to the tombs of martyrs, 10 members of the family including Feng Lian's great-grandmother are buried beside the tomb of Company Chief Liu.

Their tombstones are engraved with the same name --- Red Army Martyrs Tomb Keeper.

"I used to go home with my family to clean the cemetery every winter and summer vacation. When more than 1,000 tombstones were cleaned to the back, the weeds in the front grew again. Sometimes there were thorns in the weeds, and my father felt that he was wearing gloves. She would be slippery, and we would be weeding with bare hands. After intensive care for a few days, the palms and arms were wounds." Feng Lian recalled.

In 2016, Feng Lian graduated from University.

At that time, a few roommates went to Beijing, Shanghai, Guangzhou and other big cities to develop, Feng Lian chose to stay in Changpingshan in the end.

"This is the yesterday of our family, and it is also a yesterday that everyone can remember. The martyrs fell and it is still a monument. With our home here, we will stay here for generations." Feng Lian said.

Whenever members of the Red Army from other provinces come to find relatives, she is a volunteer receptionist and guide.

"Now, I have become the fourth-generation tomb-keeper of the family, and more and more people come to visit the martyrs' cemetery guarded by our family day and night." Feng Lian said, "I tell the red story of Changping Mountain over and over again. In the future, I will continue speaking for more people." (End)