"Dubai Charity" supports "Your Donation, Hayat", with one million dirhams

The Dubai Charitable Society has contributed an amount of one million dirhams in favor of the "Donate Your Life" initiative, which is adopted by "Emirates Today" newspaper, in cooperation with the Mohammed Bin Rashid University of Medicine and Health Sciences, and the Department of Islamic Affairs and Charitable Activities in Dubai. The initiative aims to support 38 patients suffering from failure all 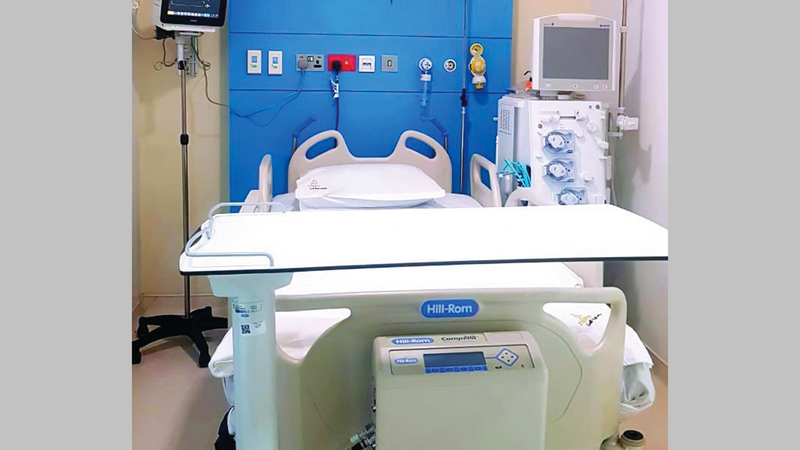 9 patients await assistance with their treatment expenses of 6.7 million dirhams

"Dubai Charity" supports "Your Donation, Hayat", with one million dirhams

The Dubai Charitable Society has contributed an amount of one million dirhams to the benefit of the "Donate Your Life" initiative, which is adopted by the newspaper "Emirates Today", in cooperation with the Mohammed Bin Rashid University of Medicine and Health Sciences, and the Department of Islamic Affairs and Charitable Activities in Dubai.

The initiative aims to support 38 patients with kidney failure and kidney transplantation for them in the Emirate of Dubai, at an amount of 22 million and 670 thousand dirhams, by motivating the private sector, businessmen and community members to adopt this initiative, and provide the necessary support to the target group.

The list of patients includes 14 children and 24 adults, including 13 citizens, a Gulf patient, three Arabs, a patient from the Comoros Islands, and 20 Asians.

The contribution made by the association helps in treating and transplanting kidneys to patients included in the initiative, providing the necessary medication for them, and therapeutic follow-up for patients after the operation, and the operation will be performed for them and their treatment will be started at the Mediclinic Hospital in Dubai, and nine patients are still waiting for assistance with their treatment expenses of six Millions and 760 thousand dirhams.

This initiative comes within the newspaper’s initiatives in the blessed month of Ramadan. The volume of donations for this initiative, since its launch so far, has reached 15 million and 910 thousand dirhams, sufficient for the treatment and transplantation of kidneys for 29 patients.

The Secretary-General of the Dubai Charitable Society, Ahmed Muhammad Mosmar, indicated that the goal pursued by the initiative in kidney transplantation is a noble and humane goal, through which it seeks to save the lives of this group in need of financial support to carry out the transplantation and restore their lives normally, and it is our duty to participate and contribute to Such a pioneering community initiative, which aims to draw a smile on the faces of these patients before the blessed Eid al-Fitr, as well as the good role that these parties play in seeking to make the national community initiative succeed, explaining that one of the objectives of the association is to support all segments of society and focus on citizens and residents. And providing services to them in all fields.

He added that «the association decided to provide support and contribute to the initiative of donating you a community life, with an amount of one million dirhams, coinciding in these days with the blessed month of Ramadan, as we hope that everyone, whether institutions or individuals, will contribute and support this initiative that concerns kidney patients, they are our sons and brothers, And everyone should unite so that the joy is for them two joys, the joy of cultivation and treatment follow-up and the joy of restoring their normal lives. ”

The Executive Director of the charitable work sector at the Department of Islamic Affairs and Charitable Activities in Dubai, Ahmed Darwish Al Muhairi, affirmed that the Dubai Charity Association’s contribution of one million dirhams reflects a full commitment to effective participation in humanitarian initiatives, which are an extension of the leadership approach, and in support of philanthropy efforts in the United Arab Emirates. To the great role of associations and their permanent presence at the heart of charitable and humanitarian campaigns and projects, seeking to enhance the human and civilizational image of society and the state through qualitative response.

The Director of Communication and External Relations at the Mohammed bin Rashid University of Medicine and Health Sciences, and the national coordinator in the National Committee for Organ Transplantation, Nujoud Abdulaziz Al-Khuloufi, said: “The Dubai Charitable Association is one of the leading institutions providing humanitarian services, and this generous donation is not new to this pioneering institution. , Which brings us back to the fore in charitable work, and we thank them very much for their donation and contributions to the initiative you donate life, which will give hope for a new life for patients with kidney failure and their families ».

"We thank the Dubai Charity Association for its donation and support for the initiative to donate your life with a sum of one million dirhams," said the editor of "Emirates Today", colleague Sami Al Riyami.

He pointed out that the total donations have so far reached 15 million and 910 thousand dirhams, sufficient for the treatment and kidney transplantation of 29 patients included in the initiative, and we call on the institutions operating in the country to provide the necessary support for the community initiative.