TV review "Hard but fair": Suspension of AstraZeneca vaccination - Lauterbach would have decided differently than Spahn

Worries about AstraZeneca again: reports of possible complications after vaccination keep Europe in suspense. With Frank Plasberg, the experts try to classify them. The message: take the situation seriously without panicking. 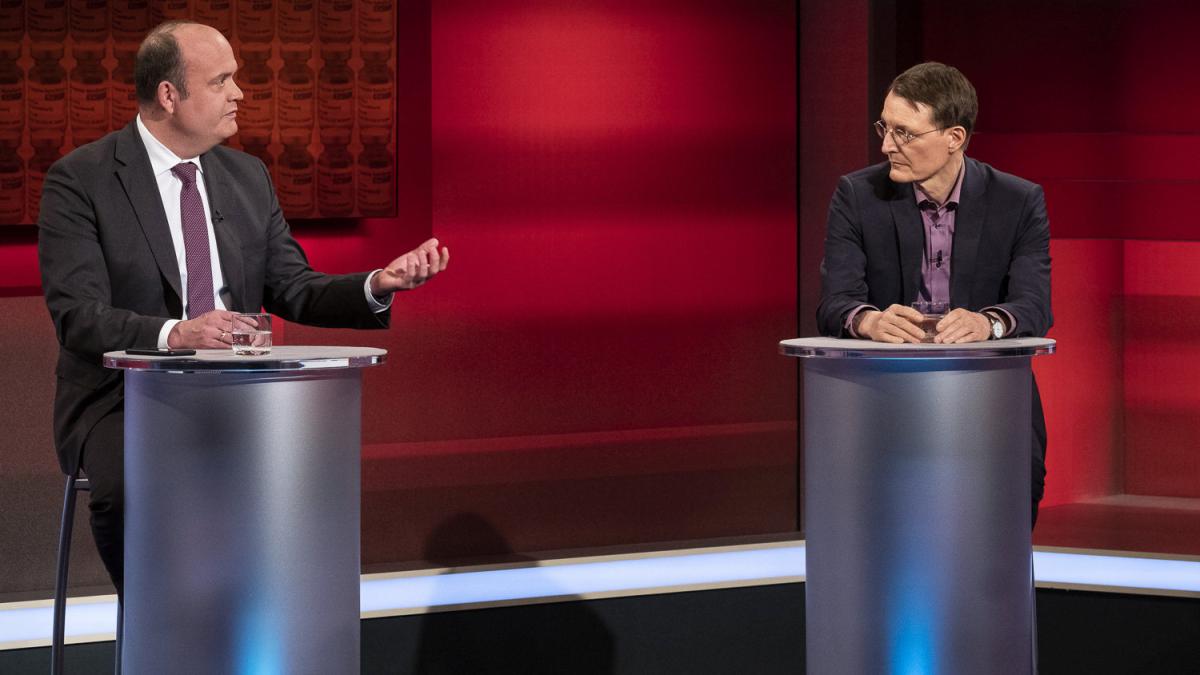 AstraZeneca does not get out of the headlines.

Like other countries, Germany decided on Monday to temporarily pause vaccination with the vaccine.

Unexplained incidents of blood clots after vaccination - which do not have to be related to this - should be investigated.

In the ARD talk on “Hart aber fair”, this resulted in a short-term program changeover.

Instead of the state elections on Sunday, the corona crisis was discussed once more.

Also on board: Dr.

Andreas Gassen, chairman of the board of the National Association of Statutory Health Insurance Physicians, science journalist Ranga Yogeshwar, SPD member of the Bundestag and physician Karl Lauterbach, and Robin Alexander, deputy editor-in-chief of WELT.

Statement of the evening

"I would not have done it." Lauterbach replied to the question of whether he would have temporarily suspended the AstraZeneca vaccinations if he had been in the position of Health Minister Jens Spahns (CDU).

In his opinion, the likelihood that the reported blood clots are a complication of the vaccine is high, but one has to "put this into perspective." Presumably, if at all, only one person out of 250,000 to 300,000 is affected.

"The benefit in relation to the harm is justifiable."

Continuing the vaccination while investigating the incidents at the same time, according to Lauterbach, would have been the better solution.

The doctor expects an examination time of around a week that evening.

It would have been "difficult to hit otherwise," said Gassen.

Like all the other guests that evening, he advocates waiting for the experts to evaluate.

After all, a lot is possible, from a vaccine problem to batch problems to coincidence.

"An extra week doesn't make the cabbage fat either."

Science journalist Yogeshwar shares this cautious approach: “The clear message here is: It's a small risk.

But it is also a bit of clarity for the citizen to say: We look carefully. "

In the meantime, a closer look is indeed taken.

The Paul Ehrlich Institute responsible in Germany is currently checking the available data.

Institutes in neighboring countries and the European Medicines Agency EMA do the same.

The UK Medicines Agency (MHRA) reported that by February 28, it had received roughly the same amount of reports of blood clots following vaccination with the Pfizer / Biontech and Oxford / AstraZeneca vaccines (38 versus 30), but neither of the two expected in the general public Exceed numbers.

There had been no evidence of a blood clot problem during AstraZeneca's studies that found the vaccine safe and effective.

The health tip of the evening ...

... comes from the medical professional and SPD man Lauterbach, who, when asked, explains how to recognize a possible complication.

"If I do not see any skin bleeding or severe headaches in the four days after the vaccination, I can assume that I probably do not have it." The prophylaxis against this special form of sinus vein thrombosis that is currently being discussed is but not possible.

Taking blood thinners as a precautionary measure before vaccination is also unlikely to have any effect, although this has not been investigated either.

Gassen also warns: “Not everyone should start now to take their own precautionary measures.

Nobody should strive for anything in self-medication. ”Overall, one knows too little.

Therefore, the analyzes would have to be awaited now.

"Keep calm and see what is and deal with the results" is the motto now.

"Politically, a basic trust has been shaken," says WELT author Alexander, summarizing the mood in the country.

The fact that Germany vaccinates so much more slowly than many other countries is a huge problem.

One must clearly state that mistakes have been made, both in the EU and in German politics.

We have a picture of our state that it is functioning effectively, ”said Alexander.

But all the mishaps - a slow vaccination campaign, the problems with the tests, a Corona app that has been described as the best in the world, and then it is of little use - all of this gnaws at it.

In this situation there is a high level of skepticism among the population as to whether the government is still functioning well.

The navel gaze of the evening

When asked what role the media played in concerns about vaccines, Alexander explains that the motto “say what is” is always correct.

Accordingly, programs like this are important, according to the WELT journalist.

The buck this time goes to others: "The irritation about AstraZeneca did not come from the media, but from two state authorities."

“We media are definitely doing it.

We make the exceptions in the program the rule, ”says the science journalist.

And this despite the fact that "the risks we are talking about are very small risks".

This is problematic, especially when you consider the key role of the media in public communication.

Yogeshwar still considers the open debate about risks and side effects to be important.

"I would rather live in a country in which even the small details of such an important topic are examined." From this point of view, a program like "Hart aber fair" is important and existentially significant for many people.

Conspicuousness of the evening

The conspicuousness of the evening has nothing to do with the topic of the debate, but with the composition of the group: holding a purely men's group, especially one week after International Women's Day, is weak - regardless of the expertise of all those involved.

That evening there was a clear consensus on one question: Would you be vaccinated with AstraZeneca?

Karl Lauterbach confirms this without hesitation.

Ranga Yogeshwar also replied that he would “definitely get vaccinated”, after all not only “the risk is very low”, but also the risk of blood clots in corona disease itself is high, where around 25 percent of those infected develop them and some also die from it.

Robin Alexander answers with humor: "You can call me day or night, I'll be there in 15 minutes".

Andreas Gassen, himself a doctor, has already gone one step further: "I got vaccinated with AstraZeneca and tolerated it without any problems." AstraZeneca was produced using a tried and tested and well-known vector process and public perception was volatile.

In the beginning, according to Gassen, ironically, there was a lot of skepticism about the new mRNA vaccines, and there were reports of isolated strong side effects of the Biontech vaccine in the USA.

All of this has turned completely.

"That is very often also determined by the media presentation." In the end, the following still applies: "Rare things are rare."

Didn't he still have doubts after today's news?

I didn't have any concerns then and still don't have them.

I would also have the second vaccination. "