Inferior artists, only flow theory, rice circle... At the two conferences, they spoke to these hot spots!

Chinanews client, Beijing, March 11 (Reporter Ren Siyu) "It is recommended to rectify the bottom-line star chasing", "It is recommended that the works of inferior artists can be re-broadcast after the expiration of the punishment period." "The committee members say that the casting of film and television dramas cannot be based on traffic only"... this year During the National People's Congress a 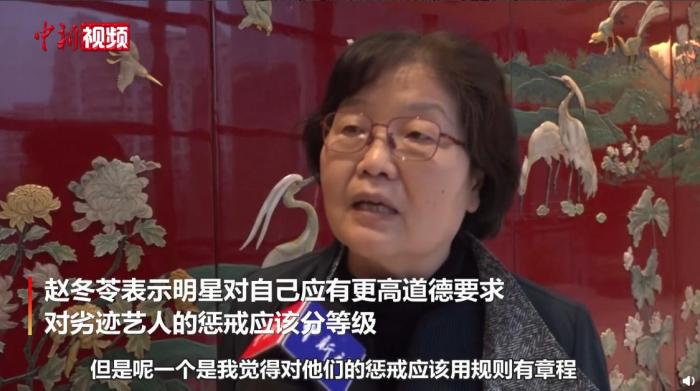 Talking about "Inferior Artists": Punishment should be based on rules

During the NPC and CPPCC this year, the topic of "inferior artists" discussed by the delegates once again attracted the attention and heated discussion of netizens.

Last month, the China Performance Industry Association issued the "Administrative Measures for the Self-discipline of Performers in the Performance Industry", which for the first time clearly stipulated the practice standards that performers should consciously abide by.

According to the regulations, “bad actors” will be boycotted by the association’s member units for a one-year period to a permanent period, and must apply within 3 months before the boycott period expires, and can only continue to engage in performance activities after approval.

NPC deputy and screenwriter Zhao Dongling has put forward relevant suggestions on "inferior artists" for two consecutive years. This year, she paid attention to the issues of film and television works related to artists and film and television companies.

"When something goes wrong, the artist should bear the consequences. This is understandable. But the punishment for them should be rule-based. For example, the risk of the works involved and the capital behind it should be within the controllable range and be affected by them. Can claim or other remedial measures be taken."

Han Xinan, member of the National Committee of the Chinese People’s Political Consultative Conference, secretary of the party group of the Chinese Music Association, and vice chairman of the conference, proposed that binding regulations should be formulated, especially the boundaries of violations of laws and regulations, delinquency and disciplinary standards, and quantification, for example, based on bad artists. The nature of the behavior and the negative impact on the society are graded and punished, and a negative list and timetable for market bans are made. This not only ensures that the practitioners who violate the law, discipline, morality and anomie will be punished, but at the same time, it can also avoid “one-stick beating”. The controversy of "death".

Zhu Lieyu, deputy to the National People’s Congress and director of the Guangdong Guoding Law Firm, talked about the issue of “star drug use”. He said that drug use by public figures has a great negative impact on society, especially the youth group. "It is written into laws and regulations to rectify the drug-related chaos of stars, and promote the formation of a good atmosphere in the entertainment industry that does not dare to involve drugs.

Talk about plagiarism: Respect the legitimate rights and interests of the original creator

At the end of last year, a number of well-known screenwriters, directors, and writers issued a joint proposal. Guo Jingming and Yu Zheng publicly apologized for their previous plagiarism. Zhuang Yu initiated the establishment of an "anti-plagiarism fund", which sparked a big discussion about respecting copyright and resisting plagiarism. .

In recent years, incidents involving infringement of film and television dramas have occurred frequently. How to identify plagiarism in the field of literature and art, what penalties the plagiarers will face, and how to protect the rights and interests of original creators have also become issues of concern to the delegates.

Zheng Xiaolong, a member of the National Committee of the Chinese People's Political Consultative Conference, said that plagiarism and plagiarism of literary and artistic works are like stealing and should be punished by law and should be dealt with severely.

Zheng Xiaolong also noticed that some TV stations and movie theaters "cut the beginning and end" when they were playing film and television works, which caused the relevant subtitles of the chief creators to flash by.

He proposed that the industry should pay more attention to the authorship of film and television works.

"I think respecting intellectual property rights should start bit by bit, and we must be serious about these issues. Can the management department make specific requirements to better protect the authorship rights of film and television creators."

Yan Jingming, a member of the National Committee of the Chinese People’s Political Consultative Conference and vice chairman of the Chinese Writers Association, also proposed “strengthening copyright protection in the film and television industry.” He believes that the legitimate rights and interests of screenwriters need to be protected urgently: one is that the writer’s right to authorship is not protected, and the other is that the author’s remuneration is seriously in arrears. There is a phenomenon of misappropriation of scripts.

In this regard, he suggested that the competent authorities strengthen the supervision of the film and television industry, further clarify the rules of signature and the payment of author's remuneration; strengthen the control of the distribution of film and television works involved in copyright disputes, introduce a supervision and punishment mechanism, and adopt a list of companies that have repeatedly deliberately infringed. Measures such as blacklisting, fines, and cancellation of their issuance qualifications, effectively safeguard the legitimate rights and interests of copyright owners.

Talking about only flow theory: the judgment of young audiences cannot be underestimated

Like the attitude towards plagiarism and plagiarism of literary and artistic works, the audience also suffers from "rotten films" for a long time.

Regarding the proliferation of “bad movies” and bad money driving out good money in the film and television industry, Gong Hanlin, a member of the National Committee of the Chinese People’s Political Consultative Conference, suggested: First, whether laws and regulations can be involved, and corresponding management measures should be introduced; On the artistic level, traffic is not equal to quality." He believes that actors, traffic stars, and celebrities should be rationally allocated to identify artistic positioning.

In the opinion of Liu Jiacheng, a member of the National Committee of the Chinese People’s Political Consultative Conference and director, the cultural attributes of film and television dramas cannot be lost. The notion of making money is not long-term. Film creation cannot underestimate the appreciation level of young audiences. Blindly choose traffic stars who do not fit the role. All good dramas The success of the company is inseparable from intention, affection, diligence, and digging into details.

Talking about the culture of the rice circle: to buckle the first button in life

Not long ago, the national fan support club of actor Zhang Xiaofei issued a complaint against the brokerage team for "losing contact." After that, the fan club and fan club were all dissolved, and the Chaohua host was also taken over by the company. The company’s behavior was praised by many netizens: "She depends on it. What is strength, there is no need for the rice circle set!"

During the two sessions, "Meanquan Culture" was on the hot search list. Song Wenxin, a representative of the National People's Congress and vice principal of the Tai'an Cultural Industry Secondary Professional School, once again proposed to rectify the Fanquan Culture, which triggered a heated discussion on the Internet.

Song Wenxin believes that behaviors such as illegitimate meals and fan circles tearing each other are "no bottom line chasing stars." If the fan circle economy or fan economy exceeds the boundary, vigorous rectification should be carried out.

Talking about the "rice circle culture" and the development of minors' "ideology", she said that good idols play a very important role in the growth of minors, and rational idol worship can help minors to "hold good" The first button in life".

Feng Yuanzheng, a member of the National Committee of the Chinese People's Political Consultative Conference, also said that he hopes to correctly guide the culture of the rice circle, especially among primary and middle school students.

Fan circle culture is no longer simply liking a star, but has become an industry, with rules and regulations.

Wei Zhenling, a member of the National Committee of the Chinese People’s Political Consultative Conference and the deputy procurator of the Liuzhou City Procuratorate, proposed “pay attention to rectifying fan cultural chaos.” She suggested that the star fan support association should be registered with the civil affairs department, clarify responsibilities, stipulate rights and obligations, and “what activities can be organized” , Whether it is possible to raise funds, and at what level, must be registered in accordance with relevant regulations, carry out activities in accordance with the law, and accept annual inspections."

This year’s Spring Festival, the Chinese film market ushered in a “good start”. After the epidemic, the entertainment industry has come to a critical period of recovery. Regarding the sustained and healthy development of the industry, the committee members actively proposed film creation, drama awards, private performance institutions and talent training, etc. Suggestions.

National People's Congress representative and director Jia Zhangke revealed that 60% to 70% of filmmakers are currently freelancers, and film creation is a long process. He suggested providing credit funds to film creators to support their creation.

Jia Zhangke said that if the film is to become stronger, it is actually to produce good works.

China's commercial film has made great progress, and the development of China's art film is also full of vitality as always.

He believes that various talent policies and industrial policies can be adopted to allow more film talents to rise and help them climb higher artistic peaks.