What are the ways to play in-place Chinese New Year? Surrounding B&amp;Bs become hot cloud tourism as a key word

What are the ways to celebrate the new year on the spot? On the evening of February 15th, tourists played in Wangfujing Pedestrian Street in Beijing to celebrate the Spring Festival. Photo by our reporter Wang Weiwei   Reading tips   In the context of in-situ Chinese New Year, local tourism has rapidly increased this year during the Spring Festival holiday, which has led to a significant inc 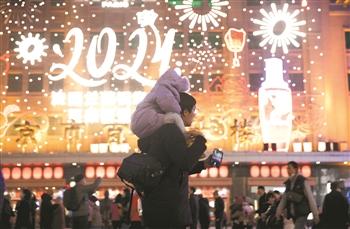 What are the ways to celebrate the new year on the spot?

On the evening of February 15th, tourists played in Wangfujing Pedestrian Street in Beijing to celebrate the Spring Festival.

Photo by our reporter Wang Weiwei

In the context of in-situ Chinese New Year, local tourism has rapidly increased this year during the Spring Festival holiday, which has led to a significant increase in bookings for hotels and surrounding homestays in cities. Urban "micro-tourism" and online cloud tourism are also favored by tourists.

Many places deeply integrate traditional culture and folklore activities into Spring Festival tourism activities, so that people who celebrate the New Year on the spot can also feel the full flavor of the New Year.

"Booked a family room with a few friends, and everyone was very happy to get together to watch the Spring Festival Gala. The room rate was shared by everyone, and it was not expensive." Zhang Liang said that his hometown is in Xi'an, and he used to go back every year for the New Year. Gather with relatives and friends, and choose to celebrate the new year on the spot this year.

"Under the background of in-situ Chinese New Year, local tourism has rapidly increased during the Spring Festival holiday this year, which has led to a significant increase in bookings for hotels and surrounding homestays. At the same time, the city's micro-tourism and online cloud tourism are also popular among tourists. "On February 18th, Wei Xiang, a professor at the Institute of Financial Strategy of the Chinese Academy of Social Sciences and co-director of the International Society of Chinese Leisure Studies, told a reporter from the Workers’ Daily.

Gu Huimin, Dean of the School of Tourism Science, Beijing International Studies University, also pointed out: “This year’s Spring Festival tourism is mainly a local tourism formed by the Chinese New Year on the spot, with leisure and cultural tourism as the main body. It is worth mentioning that many places combine traditional culture with Folklore activities are deeply integrated into the Spring Festival tourism activities, so that people who celebrate the New Year on the spot can also feel the full flavor of the New Year."

Hotels and B&Bs around the city are hot

Many big cities that sang the "empty city plan" during the Spring Festival in previous years have become popular tourist destinations this year because of the Chinese New Year. Urban "micro vacations" are favored.

"Hotels are the main scene of local travel. During the Spring Festival this year, staying in hotels and visiting scenic spots have become a new choice for many people." Feng Rao, head of Mafengwo Tourism Research Center, said.

According to the latest data from Ctrip, the trend of hotel vacations is obvious during the Spring Festival holiday this year.

Among them, resort hotels with hot springs, paradise, parent-child, etc. as the theme are the favorites of users.

The quality of hotel vacations is also upgrading this year. High-star hotels (4-star, 5-star) orders accounted for about 60% during the Spring Festival.

In addition to hotels, homestays around the city are also very popular.

One week before the Spring Festival, Zhang Liang discovered that some boutique B&Bs that provide food and entertainment in Huairou, Fangshan and Miyun in Beijing no longer have rooms. Some high-star hotels and hot spring hotels in Gubei Water Town also have no rooms on New Year’s Eve. Happening.

Data from Tujia Homestay shows that in first-tier cities such as Beijing, Shanghai and Shenzhen, the number of bookings for tourism products such as homestays in the surrounding suburbs has increased significantly, and the unit price of homestay bookings has increased by more than 35% compared with last year.

In order to increase the New Year’s taste experience, some high-end homestays also launched spring festival couplets, listening to cross talk, hot springs, handicraft experience, mountaineering blessings and other entertainment projects and special services that are suitable for all ages during the Spring Festival.

"This year's Spring Festival, homestays in long-term popular tourist destinations are facing more cancellations of orders, but the active new consumer demand in the city has been released in the homestays within the city's self-driving circle." Huang Wei, head of public affairs at Xiaozhu Homestay, told reporters This year’s Spring Festival, there are many experience activities in guesthouses around the city. Homestays can provide diverse services including cultural and folklore experiences, parent-child activities, catering services, etc., which can fully meet the needs of different segments of the population, which to a certain extent stimulates new consumption potential .

Local Chinese New Year has not only brought fire to hotels and homestays, but also caused the scenic spot to rise again and again.

Ms. Chu, who works in Chaoyang District, Beijing, found that since New Year’s Eve, reservations for parks in Beijing are very popular. Tickets for famous scenic spots such as the Summer Palace, Beihai Park and Temple of Heaven are even more difficult to find.

The data of Lv’s mother shows that theme parks, Nianwei folk-custom scenic spots, and suburban outing parks are the most popular.

In addition, traditional programs with the characteristics of the New Year---flower viewing lanterns, flower exhibitions, and folk tours for praying for blessings, etc. are also coming back to life this Spring Festival.

The Weijiapo Scenic Area, an ancient village in Mengjin County, Luoyang, Henan Province, opened its ancient houses for free during the Spring Festival. At the same time, it launched a series of Spring Festival activities. Traditional folk customs and traditional food took turns. Many tourists found a familiar taste here.

Cloud tourism becomes the key word of this spring

During the Spring Festival this year, cloud tourism also provides a different way of traveling for people celebrating the new year on the spot.

“We have invited travel anchors in major destinations around the world to share the'nature of the New Year' in the live broadcast room, showcasing different Spring Festival folklore, history and culture, winter beauty and special experiences in different places, so that they will be affected by the epidemic. People who celebrate the New Year here can feel the taste of the new year around the world without leaving home.” Feng Rao said that the average popularity of each live broadcast of Mafengwo is more than 100,000, about new national trends such as writing Spring Festival couplets and intangible cultural heritage paper-cut "Hundred Cows" awards. The live broadcasts experienced are all hot styles with over 400,000 popularity.

During the Spring Festival, the cultural tourism micro variety show "Little Donkey accompanies you to celebrate the new year", from the first day of the new year to the seventh day of the new year, around the authentic Shanghai New Year in Shanghai, select a representative scenic spot every day, leading the national audience in-depth" Feel the flavor of Shanghai on the cloud.

"From crossing the Songjiang River for thousands of years, looking for the roots of the Guangfulin cultural relics, to climbing the top of Shanghai, visiting the center of Shanghai; then visiting Wutong Bungalow Xiaoma Road, Wukang Road to find Shanghai’s century-old memory; visiting Disney Town, visiting the ancient town of Nanxiang , Punch in Happy Valley, and finally bathe in Oriental Springs on the seventh day of the Lunar New Year to bid farewell to the New Year. With its richness and fun, the entire program has attracted hundreds of thousands of people to watch online and experience a different cloud New Year." Li Qiuyan, general manager of the Internet Branding Department, told reporters.