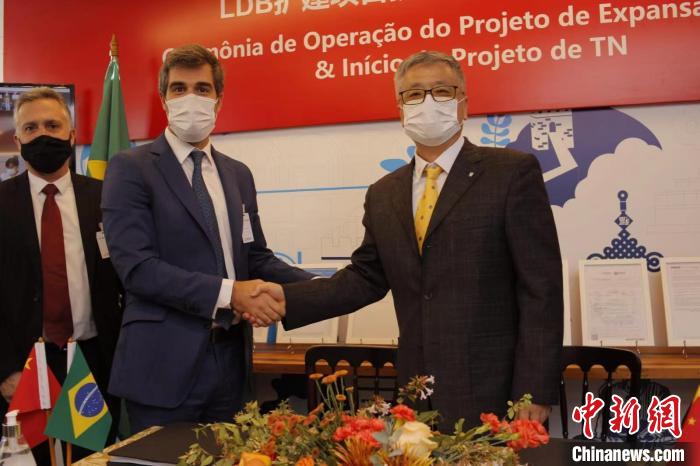 Zhang Songlin, Chairman of CGN Brazil (first from right), signed a contract with the Brazilian partner at the ceremony.

Zhang Songlin, chairman of CGN Brazil, introduced the project and signed a contract with the Brazilian partner.

Wellington Dias, the governor of Brazil's Piaui State, attended the ceremony and delivered a speech.

The LDB wind power expansion project put into production is located in Lagoa do Barro (Lagoa do Barro), Piauí state in northeastern Brazil, with a total installed capacity of 82,800 kilowatts. It is the first independent project constructed and managed by CGN in Brazil. The greenfield wind power project is expected to generate 366 million kWh of electricity annually.

During the construction of the project, CGN Brazil worked hard to overcome the impact of the new crown pneumonia epidemic. On the premise of comprehensively doing a good job in the prevention and control of the project site, it tried every means to effectively control the safety, quality, investment, progress, and environment of the project. The typhoon fan took 192 days from pouring the foundation concrete to connecting to the grid to generate electricity, creating the best construction period for the same type of wind turbine in South America.

In addition, the TN wind power project announced on the same day is located in the state of Bahia in northeastern Brazil, with a total installed capacity of 180,000 kilowatts. It is scheduled to be completed and put into operation in June 2023, with an estimated annual power generation capacity of 720 million kWh.

Yang Wanming said that China and Pakistan are both large developing countries and both face the common goal of taking into account economic development and environmental protection, and there is broad prospects for cooperation in promoting the development of low-carbon transformation.

Since entering the Brazilian market, CGN has actively promoted cooperation in photovoltaics and wind power, and has become the fifth largest clean energy supplier in Brazil.

The smoothly commissioned projects and newly started projects demonstrate the confidence and determination of Chinese companies to be participants and contributors to Brazil's green development. They hope to contribute to the construction of a green and low-carbon economy in both countries through healthy and sustainable local development.

Over the past few years, CGN Brazil has insisted on being an authentic local enterprise, contributing to creating more local jobs, assisting the local government in fighting the epidemic, improving basic education for children in poor communities in the local area, sponsoring sports for the disabled, and actively fulfilling its corporate social responsibilities. , Has made positive contributions to promoting the local economic and social development of Brazil and the cultural exchanges between China and Brazil.