On September 17th, Pinduoduo's live broadcast room to help farmers once again entered the 2021 "Anhui Agricultural Fair" online. At the time of the 2021 Chinese Farmers Harvest Festival "Golden Autumn Consumption Season", this live broadcast of agricultural assistance also ushered in a lot of attention, and finally attracted 240,000 netizens to watch and put together orders.   The relevant pers 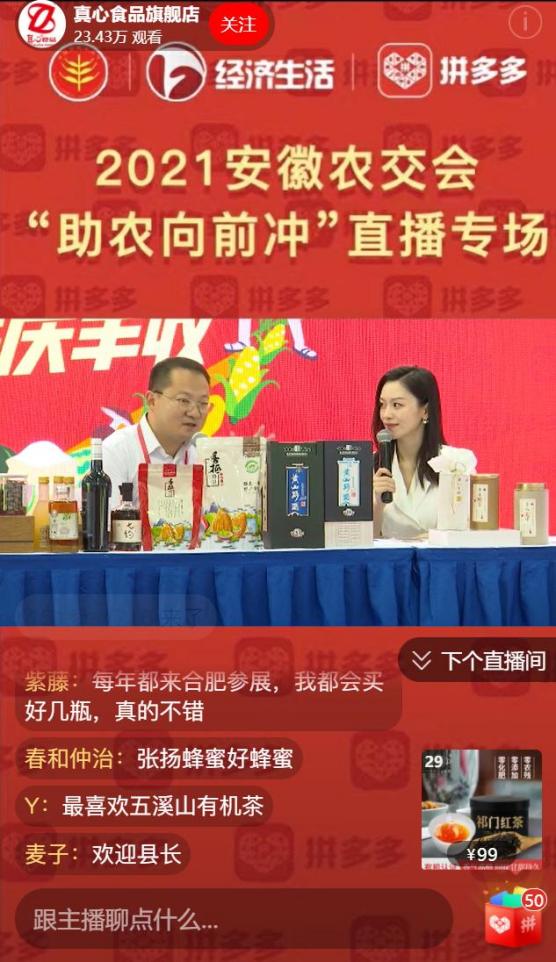 At the time of the 2021 Chinese Farmers Harvest Festival "Golden Autumn Consumption Season", this live broadcast of agricultural assistance also ushered in a lot of attention, and finally attracted 240,000 netizens to watch and put together orders.

The relevant person in charge of Pinduoduo expressed that he hopes to take advantage of important opportunities such as the Anhui Agricultural Fair to continue to help all parts of Anhui to display the good and characteristic products of Anhui to netizens across the country through new e-commerce, further promote the Anhui agricultural product brand, promote the upward trend of agricultural products and the revitalization of the countryside.

Since 2009, the "Anhui Agricultural Fair" has gone through twelve years.

In this year's Agricultural Fair, the integration of "Exhibition on Cloud" and digital technology has become one of the highlights.

On September 17, the organizing committee and Pinduoduo jointly set up a live broadcast room of "Helping Farmers Go Forward", presenting Anhui special agricultural and sideline products online in front of netizens, and you can enjoy the "Agricultural Products Feast" without going out. ".

More than 30 exhibitors from seven cities in Anhui, including Hefei, Huangshan, Suzhou, Bengbu, Xuancheng, Bozhou, and Tongling, walked into the live broadcast room and "planted grass" to netizens in various regions with more than 50 special agricultural and sideline products.

Among the exhibitors participating in the live broadcast of this year's Anhui Agricultural Fair "Helping the Farmers Forward", there are many established traditional enterprises.

For example, Dangshan County, the "World Pear Capital", has two companies participating, either famous for canned fruits, or using crisp pear wine as its flagship product.

One of these companies has nearly 100,000 fans in its stores on the Pinduoduo platform.

According to reports, in the recent top ten list of Pinduoduo crisp pears, crisp pears from Dangshan accounted for 80%.

In recent years, the Dangshan County Government has also continuously opened up the idea of ​​integrating offline and online development, turning its attention to Pinduoduo, a new channel for agricultural products, and has frequently launched cooperation.

In addition to established traditional enterprises, Pinduoduo has also attracted a group of "new farmers" in Anhui who have returned to their hometown to start businesses in recent years.

Xu Xuechao, who graduated from Anhui Agricultural University with a major in plant protection, is a new face in the Pingduoduo live broadcast studio of the China Agricultural Fair.

Xu Xuechao introduced that a few years ago, he and his classmates came to Nanping Village, a thousand-year-old village at the foot of Huangshan Mountain, to contract land and set up an ecological farm for growing organic rice.

The two hope to adopt a model of rice-duck symbiosis, which will not only protect the rural land, but also allow more people to eat natural ingredients.

Xu Xuechao recently opened a new store on the Pinduoduo platform, hoping to further explore the conversion and added value of rice.

In the live broadcast room, he introduced the naturally fermented rice wine, which is naturally additive-free, which has attracted the attention of many netizens.

On the Pinduoduo platform, the monthly sales of Anhui specialty agricultural and sideline products such as Huangshan sesame cake, Dangshan crisp pear, and Huangshan Huangju have exceeded 100,000 orders. The leading agricultural products companies in Anhui, such as the flagship store of Zhenxin Foods, have also ranked first in the best-selling list of related products.

The high sales of agricultural products in Anhui are inseparable from the vigorous promotion of local governments.

In the live broadcast room, after Wang Liang focused on the black tea in Yixian County, he sent out invitations to netizens to go to "Heiduo" County to see the autumn scenery of the ancient city.

Wang Liang's "bringing goods" was professional and witty, which pushed the live broadcast atmosphere of the Agricultural Fair to a climax.

On September 17, Wang Liang (left), the deputy county magistrate of Huangshan City, and the anchor of Anhui TV station recommended the characteristic "five black" products of Yixian County to Pinduoduo netizens at the "Anhui Agricultural Fair".

As of 4 pm on the 17th, netizens' enthusiasm for the "Cloud Shopping Exhibition" has not diminished, and at this time it has attracted 240,000 netizens to watch.

As of the end of the special live broadcast of the "Farm Fair", the search for commodities such as Anhui dark tea on Pinduoduo's platform had increased by more than 250% month-on-month.

"Since 2020, leaders of many cities and counties in Anhui Province have carried out live broadcasts to help farmers on Pinduoduo, and each of them has achieved tens or even millions of viewing results." The relevant person in charge of Pinduoduo said that as an agriculture Anhui, a large province, is rich in agricultural product resources. Both the types of agricultural and sideline products sold on the platform and the sales volume are among the best in the country.

After the end of the Fair, 850 million consumers on the platform can still search for the "Harvest Festival" keywords through the Pinduoduo APP, and place orders for Dangshan crisp pears and other high-quality agricultural products from all over the event page.