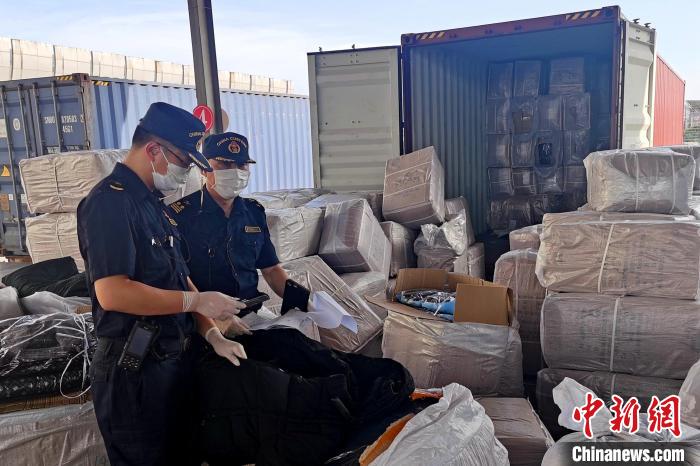 As an important light industry production and export base in China, Jinjiang has formed two industrial clusters exceeding 100 billion yuan in textiles and garments, shoemaking, and five industrial clusters in excess of 10 billion yuan in food and beverages. It also owns footwear, clothing, swimwear, umbrellas, etc. Demonstration base for the transformation and upgrading of foreign trade in two countries.

Since the pilot, Quanzhou Customs has further optimized the customs clearance model based on the pain points and blockages that occurred during the early operation of the Jinjiang Shoes Textile City market procurement pilot, and launched the integrated customs clearance model in Xiamen Customs on April 2 to effectively solve the traditional Under the model, the problems of multiple loading and unloading, time-consuming, and high cost of transit and export have realized the nearest customs clearance of market-purchased goods, which will help enterprises to further save logistics and time costs.

At the same time, Quanzhou Customs has further simplified the customs clearance procedures, shortened the time of customs clearance, and ensured that the market procurement declaration forms are seamlessly connected to the "single window" through the shared platform, implemented export declarations in advance, simplified declarations, and realized "second review" and "second release" of customs declarations. Help enterprises to further seize market opportunities; promote the innovation and reform of market procurement trade supervision, cooperate with local relevant departments to tap the trade potential of local characteristic industries, and promote the market procurement model. , Swimwear, umbrellas and other fields.

Under the protection of various customs clearance measures, the market procurement and trade agglomeration effect of Jinjiang Shoes Textile City has initially appeared, with 1,387 enterprises and merchants settled in.

At present, the export goods involve 12 categories of commodities such as building materials, footwear, textiles and garments, hardware and electrical machinery, etc., covering 145 countries and regions including the Philippines, the United States, South Korea, and Vietnam.

"Under the traditional model, customs transit and export have been loaded and unloaded many times, time-consuming, and costly. The market procurement trade method has greatly reduced the logistics and time costs of small and medium-sized enterprises, and lowered the barriers to foreign trade." Jinjiang Ciling International Trade Co., Ltd. Customs Officer Guo Weihong told reporters that thanks to the convenient and efficient customs clearance service, we can pass customs in an integrated manner at the source of goods, and we can easily achieve the goal of "selling the world" at our doorstep.

It is understood that the market procurement trade method not only solves the problem of "small orders, miscellaneous goods, and many varieties" of non-VAT invoices for merchants in the Jinjiang International Shoe Fair City market, but also lowers the barriers to foreign trade, making the shoe fair city suppliers and purchasers. Merchants do not need to deeply participate in substantive foreign trade links, so that small and medium-sized merchants who do not have the ability to international trade can simply participate in foreign trade.