Digital RMB test upgrade: Alipay's entry into WeBank is on the way

Digital RMB test upgrade: Alipay enters the market, WeBank is on the way   The promotion of digital renminbi goes further. On May 10, a reporter from China Business News learned that the Alipay App has launched a digital RMB module for some test users, which can be used for consumption, transfers between users, and collections. This feature is currently in the internal testing stage, and users 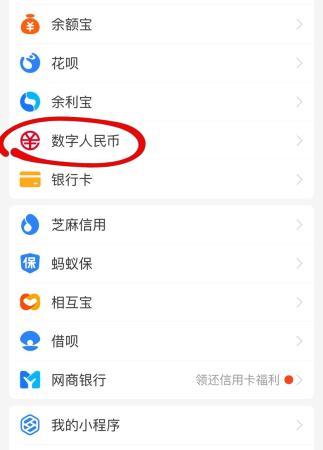 Digital RMB test upgrade: Alipay enters the market, WeBank is on the way

On May 10, a reporter from China Business News learned that the Alipay App has launched a digital RMB module for some test users, which can be used for consumption, transfers between users, and collections.

This feature is currently in the internal testing stage, and users who failed to participate in the test will not be able to experience it temporarily.

Another WeBank, which is an operating institution, is currently showing "coming soon."

"Today, I suddenly discovered that the digital renminbi module was launched in the Alipay App. I haven't paid attention to it before." A user who participated in the internal test told a reporter from China Business News.

The reporter learned that, at present, Alipay has launched the "digital renminbi" function for closed beta users in a small range.

Users who participate in the internal test can see the "Digital RMB" module in the "My" column of the Alipay App, click to enter, and enter their name and other information as required to register an online merchant bank digital RMB wallet.

The wallet can be used "real name" or "anonymous use", but an Alipay account can only open one wallet, and after registration, each wallet will get a unique wallet number and a special code for receiving digital RMB.

For individuals, digital renminbi can be obtained through exchange and transfer through bank accounts or through transfers from others.

From a functional point of view, the wallet can provide transfer and collection services. Others can use the wallet number, the Alipay account corresponding to the wallet or the special code for digital renminbi collection; in addition, the digital renminbi can also be used for consumer payment, related information It shows that the current merchants supported by digital renminbi e-commerce banks include online Tmall supermarkets and some merchants in Shanghai, such as 7fentian, Guozhimanman, and Manner Coffee.

In addition to the launch of the "Digital RMB" module on Alipay, the Internet Commercial Bank (Alipay) has also recently landed on the "Digital RMB App", and the digital renminbi operating agency has expanded.

However, the reporter learned that in the "Digital RMB App", although the digital wallet of Netshang Bank can be registered, it is temporarily unavailable after registration.

Zeng Gang, deputy director of the National Finance and Development Laboratory, told reporters, "With the continuous access of third-party scenarios, the use of digital renminbi has also been significantly expanded, creating better conditions for the promotion of digital renminbi."

It is worth mentioning that the news of "digital renminbi accessing Alipay" has also attracted public attention. Some people are still unclear about the relationship between WeChat, Alipay and digital renminbi.

Earlier, Mu Changchun, director of the Central Bank's Digital Currency Research Institute, said that WeChat, Alipay and digital renminbi are not in the same dimension.

In Mu Changchun's view, WeChat and Alipay are financial infrastructures and wallets, while digital renminbi is a payment tool and the contents of the wallet.

At the same time, the respective commercial banks of Tencent and Ant are also operating institutions and do not have a competitive relationship with digital RMB.

In addition, from the point of view of payment functions, compared with WeChat and Alipay, digital RMB can support dual offline transactions. Even if there is no network, transactions can be completed by "touching" between wallets, which improves the convenience and stability of transactions. .

Application scenarios continue to be enriched

The consensus in the industry is that in the future, with the addition of online commercial banks and WeBank, there will be more and more application scenarios for digital renminbi, and the number of institutions participating in the pilot test is expected to further increase.

On the whole, the current "two-tier operating system" of the digital renminbi has been basically established.

The first layer is the central bank, and the second layer is commercial banks, telecom operators and third-party payment network platform companies, etc., responsible for exchanging digital renminbi to the public.

"Under this system, both banks and payment institutions only act as intermediary service providers, which is somewhat different from the logic of traditional RMB operation." Hu Jie, a professor at Shanghai Jiaotong University's Gaojin College, told a reporter from China Business News.

Since its launch, the digital renminbi has been piloted in many cities, and the “10+1” pattern has been initially formed.

In addition to the pilot areas of Shenzhen, Suzhou, Xiong’an New District, Chengdu, and the Beijing Winter Olympics, by October 2020, six pilot areas of Shanghai, Hainan, Changsha, Xi’an, Qingdao and Dalian will be added to the digital RMB.

At present, the above-mentioned pilot work is progressing steadily. For example, according to Liu Min, deputy director of the Shanghai Municipal Commission of Commerce, the Shanghai commerce industry has been included in the digital RMB pilot application scenario by the end of 2020.

At present, the testing work of Shanghai's key business districts, commercial streets, enterprises and platforms is progressing in an orderly manner, and the payment acceptance environment is continuously optimized.

In addition, at the China International Consumer Goods Expo held a few days ago, a number of banks launched a special area for digital RMB experience activities. Participants can use mobile phones, video chip cards and other hardware wallet carriers to experience a variety of consumption scenarios.

For some institutions, the expansion of the scene will also bring new business opportunities.

Zeng Gang gave an example to reporters that with the continuous advancement of digital renminbi, the construction of the entire system surrounding the use and circulation of digital renminbi will change greatly in the future; in addition, based on new service scenarios, some institutions can also explore new business models. , Including the innovation of scene financial model and the application innovation of technology.

Hu Jie also told reporters that the opportunities brought by the digital renminbi may lie in the application of digital wallets and the creation of scenarios.

Earlier, there was a point of view that banks that can take the lead in digital currency application scenarios or find more and better scenarios, and the applications surrounding digital currency will become more and more abundant, which can provide customers with more solutions and services.