Hotel officials suggested alternative work mechanisms in the event of restricting the activities of Ramadan tents for hotel establishments, including providing meals inside restaurants, or using open and open areas for this purpose, as well as providing ready meals and delivering them to those who wish, and making tables available. 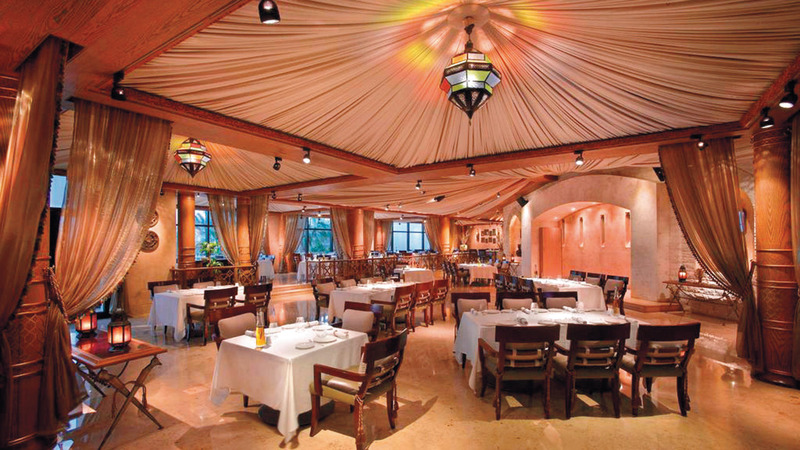 Hotel officials have suggested alternative work mechanisms in the event of restricting the activities of Ramadan tents for hotel establishments, including providing meals inside restaurants, or using open and open areas for this purpose, as well as providing ready meals and delivering them to those who wish, and making open "non-contact" breakfast tables available. Within health requirements.

They confirmed to "Emirates Today" that they have not yet received any circulars or instructions related to the mechanism of working tents for hotel establishments, pointing out that if the Ramadan tents are allowed to operate, this will be according to new mechanisms and methods that take into account health standards and precautionary measures at all stages, Including the carrying capacity requirements.

They explained that the hotel revenues from the food and beverage department in the Ramadan tents and hotel restaurants usually ranged between 40 and 50% during the month of Ramadan.

In detail, the CEO of "Time Hotels Group", Muhammad Awad Allah, said that hotel establishments that have large outdoor areas can, and if allowed, provide areas for breakfast and suhour meals during the holy month of Ramadan, taking into account the standards of physical distancing, and taking measures. All precautionary health, to ensure the safety of the guests, noting that the spaces surrounding the swimming pools can also be used for this purpose, if possible.

Awadallah said that during the last month of Ramadan, some hotels resorted to making offers to provide ready-made meals, and could do the same this year, pointing out that the revenues that come from the food and beverage department in the Ramadan tents ranged between 40 and 45%, and is considered one of the high rates. .

In addition, the general manager of "Al Jaddaf Rotana Hotel", Haitham Omar, said that Ramadan tents are a place for large gatherings, and therefore, their risks are very high during the current health conditions due to the pandemic, indicating that hotels, in coordination with the concerned authorities, can work according to Precautionary formulas regarding the issue of Ramadan tents.

He added that hotels can also continue to provide breakfast and suhoor meals according to new mechanisms and methods that take into account health standards and precautionary measures, inside hotel restaurants, and ready-made breakfast and suhoor meals can also be served on tables directly in hotel restaurants, without the guest having to leave the table, as part of measures. And procedures that take into account the requirements of physical distancing, and precautionary measures in various stages, from preparing meals until presenting them to the guest.

Omar agreed with his counterpart Awadallah about the possibility of using open spaces during breakfast and suhour meals, taking into account the capacity standards, according to procedures determined by the concerned authorities regarding physical spacing, pointing out that the hotel is also working to deliver external meals requests to those wishing.

In the same context, the Regional Director of "Hyatt Hotels Group" in Dubai and General Manager of the Grand Hyatt Hotel, Fathi Khojaly, said that the foremost priority during the month of Ramadan is to ensure the preservation and safety of the community and guests, indicating that the hotels will continue to work with the concerned authorities. To adhere to all precautionary measures during the month of fasting, especially with regard to serving breakfast and suhoor meals.

He pointed out that the group has not yet received any circulars from the concerned authorities regarding the mechanism of Ramadan tents, or whether they will be banned or not, stressing that the hotel sector in Dubai adheres to the highest standards of security and safety in terms of precautionary measures that were the cause of the high occupancy rates. In which.

He continued, "A formula can be found to ensure the continuation of work during the month of Ramadan, within specific standards and protocols," noting that if tents are banned, meals can be served in restaurants or open and open areas, with the standards of physical distancing.

He explained that hotels provide "buffet" services (non-contact open dining tables), meaning that the guest gets what he wants without touching the dishes or the tools for serving food.

He stressed that if the Ramadan tents in the hotel facilities are allowed to operate, this will certainly be within the health requirements and protocols that cover the various stages from entering the tent until departure, with the application of capacity standards according to the area of ​​each tent.

Khojaly said that the hotel sector in Dubai has made great strides in providing vaccinations to employees, which increases safety standards, pointing out that the "Hayat" hotel group has completed a 100% vaccination campaign for its employees, after they received the second dose.

In addition, the general manager of the Tamani Marina Hotel, Walid Al-Awa, said that hotel establishments in the past resorted to providing Ramadan tents to accommodate the largest possible number of guests, with high rates of turnout and demand, and the lack of sufficient spaces to accommodate them in their own restaurants. The hotels in these tents have singing entertainment spots, TV screens, and other services.

He added that the pandemic imposed new conditions related to large gatherings, and therefore there was a restriction on the mechanism of work of these tents, indicating that the hotel has not yet received any instructions regarding banning tents, or allowing them within specific requirements, expecting that these instructions will be issued during the coming period. .

Al-Awa continued: “In the event that hotel tents are banned, there are many other alternatives that are to provide breakfast meals in hotel restaurants within safety requirements set by the concerned authorities, but if they are allowed to work, this will also be within specific requirements related to the capacity. Allowed, with specific mechanisms related to how to provide meals and other requirements.

Al-Awa warned that the Ramadan tents, food and beverage services, used to account for between 40 and 50% of hotel establishments' revenues during the month of Ramadan, with hotel occupancy rates and accommodations during this month usually declining.

The hotel revenues from the food and beverage division during Ramadan ranged between 40 and 50%.