After closing its doors during confinement and declaring bankruptcy last November, Zalacain will finally pass into the hands of the Urrechu Group. So has 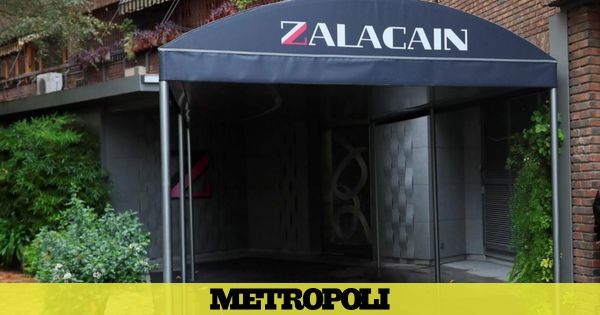 After closing its doors during confinement and declaring bankruptcy last November,

will finally pass into the hands of the Urrechu Group.

This has been decided by the Commercial Court No. 13 of Madrid, which has awarded the exclusive Madrid restaurant to the catering group of businessman Manuel Marrón, Antonio Menéndez and chef Íñigo Urrechu.

Since the news of the closure due to not being able to cope with the financial difficulties caused by the economic crisis derived from the pandemic, many groups had been interested in taking over the emblematic establishment,

. Among them, the one headed by Iñaki Arrola, Eduardo Navarro, also the Arbeloa brothers and Dani García himself. The group dedicated to the Pygmalion night was also interested in acquiring it. Finally, it will be the Urrechu group, which has four restaurants in Madrid (Urrechu Velázquez, El Zielo de Urrechu, A 'Kangas and Urrechu, in the Zoco de Pozuelo) which from now on will manage both the restaurant and the catering business and of events In Zalacaín.

Considered one of the most luxurious restaurants in Madrid and where pages of the history of our country were written, Zalacaín opened its doors in 1973. Its owner, a merchant seaman from Navarre converted to a hotelier, Jesús Oyarbide, managed to convert it, with his Basque-Navarrese cuisine with a lot of French influence and its elegant rooms, in the great reference of the international class of the capital. But the various economic crises forced the Oyarbide family to leave the business that led to a generational change in 2018 (Carmen González, as director and head of the Sala, chef Julio Miralles and sommelier Raúl Revilla joined) and a very expensive comprehensive reform . His return was good, but the pandemic, the confinement, the closures in the hospitality industry and the cut in capacity ended up finishing off the business,which had a debt of 9.5 million euros.

Gastronomy About French in Madrid ...