“Heard the commanders”: the head of the General Staff of the RF Armed Forces Gerasimov checked the groupings of Russian troops in Ukraine

Valery Gerasimov, Chief of the General Staff of the Russian Armed Forces, visited the location of Russian troops involved in a special military operation in Ukraine. He heard reports from the commanders on the progress in fulfilling the tasks of the special operation and on issues of combat support for the actions of Russian groups. Meanwhile, allied troops are preparing to liberate the city of Lisichansk, located in the west of the LPR. 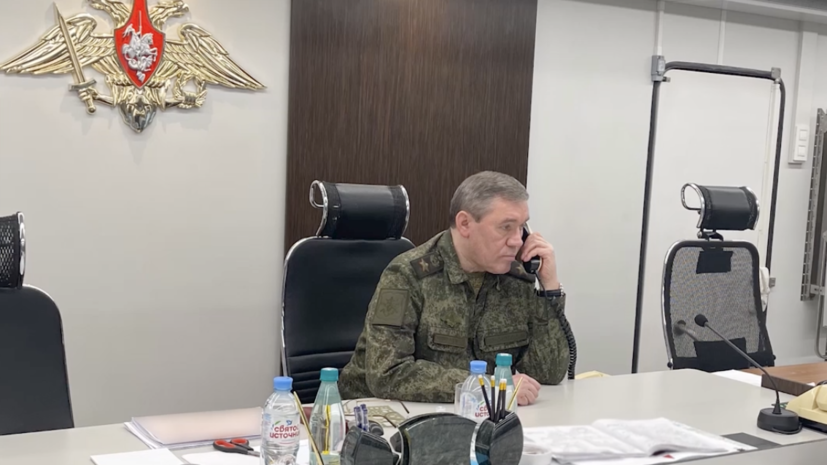 The head of the General Staff of the Russian Armed Forces, First Deputy Minister of Defense of the country, General of the Army Valery Gerasimov, checked the groups of Russian troops involved in the special military operation in Ukraine.

“Army General Valery Gerasimov heard the commanders on the use of troops (forces) in the course of carrying out the tasks of a special military operation, as well as other officials on issues of combat support for the actions of Russian groups in various directions,” the Defense Ministry said.

The department noted that Gerasimov paid special attention to the use of automated combat control systems in the course of hostilities in the interests of building up the strike capabilities of interspecific groupings of troops.

Fighting in the Lisichansk area

On the evening of July 1, the head of Chechnya, Ramzan Kadyrov, announced that the city of Lisichansk, located in the west of the LPR, would soon be liberated.

Earlier, the Ministry of Defense of the Russian Federation stated that the Armed Forces of Ukraine were suffering heavy losses in the battles in the Lisichansk region.

According to Kadyrov, the allied forces entered the city and took advantageous positions.

“The plan for the liberation of Lisichansk from the Ukrainian invaders, developed by the officers, is being carried out without adjustments.

In the near future, the city will be completely liberated from Bandera, ”Kadyrov wrote on Telegram.

He noted that the Ukrainian troops "do not coordinate actions among themselves and cannot give a worthy rebuff", while the attack of the allied forces "passed without losses and according to plan."

As noted later in the LPR, up to 2 thousand fighters of the Ukrainian territorial defense could be in the surrounded Lisichansk.

“Now there are about 2,150 disposable fighters in Lisichansk and its environs.

These are the ones who were forcibly left here, the Teroboronists, who were brought in from Lvov, Rovno regions, from Odessa, from Dnepropetrovsk, so that they would protect a whole army of mercenaries, ”TASS quotes Vitaly Kiselyov, assistant head of the LPR Ministry of Internal Affairs.

He also expressed confidence that Lisichansk would be liberated in the coming days.

Preparation of provocations against the Armed Forces of the Russian Federation

On the evening of July 1, the Russian Defense Ministry announced that it had received information that the Ukrainian side was preparing another provocation to accuse Russian troops of killing civilians and destroying civilian infrastructure.

It was about a scenario involving the use of cluster munitions prohibited by international agreements.

“According to the plan of the military administration of the Odessa region ... at the places of deployment of Ukrainian armed formations, it is planned to stage a defeat of one of the social facilities, where extras (up to 30 people) have been prepared in advance from among anti-Russian activists acting as the dead and injured,” the statement says. message.

As noted in the Russian defense department, each participant in the production is provided with a reward of $500 with an advance payment of $100.

The Russian side warns the world community in advance that this and other similar fakes about alleged “Russian atrocities” are planned to be widely disseminated in the media in the near future.

Meanwhile, the Ministry of Defense noted, the Armed Forces of Ukraine continue to use civilian infrastructure facilities for military purposes.

In particular, the Russian Defense Ministry stated that the Ukrainian military had equipped barracks in the gymnasium and placed military equipment in the city park of Kramatorsk.

Accusations of the Ukrainian Foreign Ministry against the Russian Federation

Russian Deputy Representative to the UN Dmitry Polyansky commented on the statements of Ukrainian Foreign Minister Dmitry Kuleba about the organization's appeal to the International Court of Justice with accusations against Russia.

According to Polyansky, these statements do not deserve attention.

In particular, on July 1, Kuleba said that Moscow allegedly violated the Genocide Convention.

Polyansky called the words of the Ukrainian diplomat "work for the public."

I think that these statements by Kuleba do not deserve to be given too much attention, ”Polyansky said on the air of Solovyov LIVE.

According to him, the attempts of the Ukrainian side to pass off this as a resolved issue are the desire to "pass off wishful thinking."