China News Service, 15th. According to Hong Kong's "Sing Tao Daily" report, Hong Kong's landmark and maritime restaurant Jumbo Seafood, which has been closed for more than two years due to the epidemic, officially moved out of Hong Kong on the 14th and plans to go to Southeast Asia for maintenance. Many Hong Kong citizens rushed to see off the Jumbo Seafood Boat early in the morning before it le 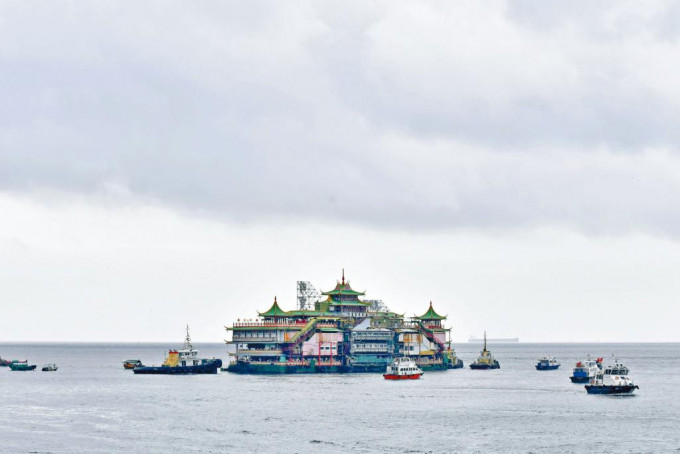 China News Service, 15th. According to Hong Kong's "Sing Tao Daily" report, Hong Kong's landmark and maritime restaurant Jumbo Seafood, which has been closed for more than two years due to the epidemic, officially moved out of Hong Kong on the 14th and plans to go to Southeast Asia for maintenance.

Many Hong Kong citizens rushed to see off the Jumbo Seafood Boat early in the morning before it left Hong Kong.

It is understood that the seafood galley kitchen boat, which was suspected of tipping into the water earlier, will not be towed away.

On the morning of the 14th, two tugboats and three escort ships arrived at the Aberdeen Typhoon Shelter, and some workers were also preparing for the departure of the Jumbo Seafood Boat.

Vessels of the Marine Department also broadcasted at the scene, urging other vessels to leave the seafood boat.

By noon, the Jumbo Seafood Boat was separated from the typhoon shelter by two tugboats and several escorts.

Yesterday morning, many Hong Kong citizens came to "farewell" the Jumbo Seafood Restaurant, took photos with it and painted it.

Citizen A Ben said that he was very "reluctant to part" in the face of the departure of Zhenbao Seafood Restaurant, "as if a relative left me".

He said that he would dine at the seafood boat two or three times a year. When asked if he thought the ship would come back in the future, he said it might be reluctant.

Mr. Cheng, a Hong Kong citizen, came to sketch with paints and a picture book on the 14th. He used color to record the last scene of the Jumbo Seafood Restaurant in Hong Kong.

Mr. Zheng expressed "be normal" about the departure of Jumbo Seafood Restaurant.

It is reported that over the past 46 years, Jumbo Seafood Restaurant has created beautiful collective memories of Hong Kong people.

Aberdeen Catering Group said earlier that in the past year, the group negotiated with more than a dozen companies and institutions to donate the Jumbo Seafood Restaurant for free, but all parties said that the operating costs were high, so it could not be achieved.

When it goes out of business, the annual inspections, repairs and maintenance of millions of dollars to meet its licensing and other requirements are a heavy financial burden on both the company and shareholders.

Parked in the Aberdeen Typhoon Shelter, the 46-year-old Jumbo Seafood Restaurant is known as "the world's largest restaurant at sea" and will become the collective memory of Hong Kong people.

The picture shows a screenshot of Hong Kong media reports

Jumbo Seafood Restaurant is a "Jumbo Kingdom" with an area of ​​45,000 square feet and can accommodate more than 2,300 guests. It has six banquet halls with different characteristics, which can accommodate up to 720 people.

The picture shows a screenshot of the official website of "Kingdom of Treasures", whose home page has displayed "suspended business".

The Seafood Boat is also the location for many films, including the classic Hong Kong films "God of Cookery" and "Infernal Affairs 2", and even "Dragon Fight" starring Bruce Lee and "007" series of films "The Iron King vs. The Golden Gun". View from the boat.

Scenes from the famous video game "Furious Wolf 2" and "Resident Evil 6" are also taken from this treasure.

However, the fate of the Jumbo Seafood Restaurant seems to have always been tortuous. It opened in 1976 and could have operated five years earlier. However, due to a fire during the interior decoration, the Seafood Restaurant was severely burned, and even affected nearby fishing boats, resulting in 34 deaths and 42 injuries. , and it was only opened after wealthy businessmen such as Stanley Ho and Zheng Yutong raised HK$30 million for reconstruction.

In 1976, the old photo of Jumbo Seafood Restaurant.

The seafood boat originated from the "Getang Boat" in Guangzhou, which is a boat that provides entertainment to fishermen.