150 million US dollars want to attract ASEAN to join? American "selling" is hard to come by!

China News Service, Beijing, May 15 (Sweet) In the past two days, US President Biden personally "organized a bureau" to try to win over ASEAN countries and join the "Indo-Pacific Strategy" -- not only American politicians and business leaders accompanied ASEAN. The leaders had lunch, held talks, and announced some $150 million in new investments in an attempt to "sell" its "Indo-Pacific economic 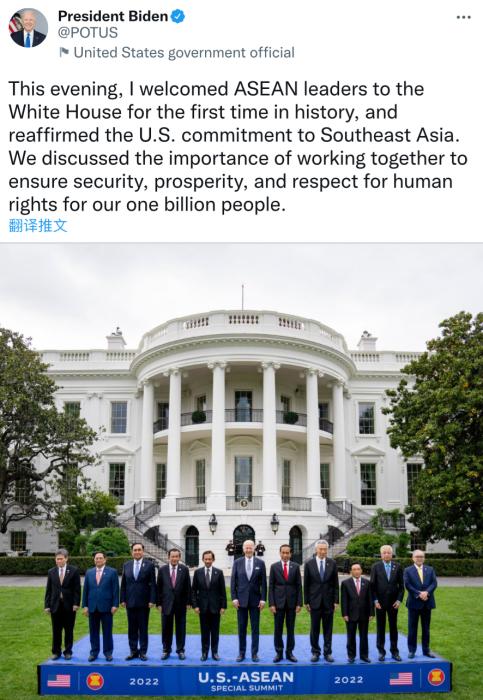 China News Service, Beijing, May 15 (Sweet) In the past two days, US President Biden personally "organized a bureau" to try to win over ASEAN countries and join the "Indo-Pacific Strategy" -- not only American politicians and business leaders accompanied ASEAN. The leaders had lunch, held talks, and announced some $150 million in new investments in an attempt to "sell" its "Indo-Pacific economic framework."

Regarding the calculation of the United States, experts believe that ASEAN's attitude is to adhere to a neutral position.

The U.S. plan is obviously difficult to achieve.

The ASEAN-US Special Summit is the first time since 2016 that the United States has hosted a special ASEAN summit on its own soil.

U.S. President Joe Biden said at the meeting that the extraordinary summit in Washington marked a "new era" in U.S.-ASEAN relations.

To this end, Biden also announced a grant plan, pledging about $150 million for ASEAN countries in areas such as infrastructure, security, epidemic prevention efforts and clean energy.

Some of the funds are allocated as follows:

-- $60 million to deploy additional maritime assets in the "Indo-Pacific" to coordinate training and other activities aimed at implementing the law of the sea.

-- $15 million to expand health surveillance programs in Southeast Asia to include detection of COVID-19 infections and other airborne diseases.

Compared with the tens of billions of dollars in recent U.S. aid to Ukraine, the investment seems modest.

Are the ten ASEAN countries enough?

Guo Xiangang, a researcher at the China Institute of International Studies, pointed out in an interview with Chinanews.com that the US's investment in ASEAN is mainly symbolic, expressing its willingness to cooperate.

He further analyzed that the United States currently regards the Ukraine issue as very important, and wants to support Ukraine in its confrontation with Russia to the end, so as to achieve the strategic goal of containing Russia.

On the other hand, considering the current economic situation of the United States, the impact of the new crown epidemic and other factors, the United States' investment in ASEAN is actually not enough.

Claiming to use this summit to commemorate the 45th anniversary of the establishment of diplomatic relations with ASEAN, but only investing about 150 million US dollars, how much sincerity does the United States have?

In fact, long before the ASEAN summit was held, the U.S. move had already aroused dissatisfaction from ASEAN-first unilaterally announcing the date of the summit, and then it was revealed that the bilateral talks between Biden and ASEAN leaders were not arranged.

An adviser to the Cambodian prime minister bluntly said that if Biden really wants to improve relations, he should spend more time meeting with leaders of various countries.

Reuters also commented that compared with China's deep ties and influence in the ASEAN region, the U.S. commitment pales in comparison.

Agence France-Presse said that the US move cannot be compared with the scale of China's investment, and China has surpassed the US to become ASEAN's largest trading partner.

The two major "selling" are difficult to work

Since taking office, the Biden administration has made frequent moves in the Asia-Pacific region - consolidating the "Quartet Security Dialogue" mechanism of the United States, Japan, India and Australia, trying to win over Southeast Asian countries to hold military exercises; at this ASEAN summit, it did not forget to "sell" its upcoming launch. The Indo-Pacific Economic Framework.

The US is trying to win over ASEAN to join the "Indo-Pacific Strategy", does the latter buy it?

After the Trump administration "cold" ASEAN countries and withdrew from the Trans-Pacific Partnership in 2017, the US trade agenda in the Asia-Pacific region has been almost blank since then.

Until the end of 2021, U.S. Secretary of State Blinken has been promoting the "Indo-Pacific Economic Framework" as an economic branch of the "Indo-Pacific Strategy", which is expected to be officially launched during Biden's visit to Japan and South Korea at the end of this month.

Singapore's Prime Minister Lee Hsien Loong welcomed the move, reminding that the framework must be inclusive.

As for the "Indo-Pacific Economic Framework", ASEAN actually takes a look at it. Guo Xiangang believes that because ASEAN is very clear, the purpose of the United States is to strengthen cooperation between ASEAN and the United States, excluding China.

ASEAN is reluctant to take sides between China and the US, and it will not be easily exploited by the US.

Agence France-Presse also pointed out that, unlike traditional trade agreements, the "Indo-Pacific Economic Framework" does not contain content that allows participating countries to gain greater market access in the United States.

CNBC pointed out that the "Indo-Pacific Strategy" of the United States focuses more on the security field and cannot attract more attention to ASEAN in the economic and trade field.

At the same time, some US media are also "disappointed" that the United States' efforts to "sell" its position on Russia and Ukraine seem to have failed.

In his speech at the Center for International Strategic Studies on May 11, Vietnamese Prime Minister Pham Minh Trin clearly stated that between independence and dependence, Vietnam always chooses independence.

The next day, Cambodian Prime Minister Hun Sen also said when meeting with overseas Chinese in Washington that Cambodia's policy is to "uphold peace and follow ASEAN's neutral position".

Guo Xiangang believes that in the wave of sanctions against Russia initiated by the United States, none of the ten ASEAN countries except Singapore has joined the sanctions.

At the ASEAN summit, the United States wanted to persuade ASEAN to join, but according to the information disclosed so far, ASEAN has not been persuaded by the United States and still adheres to its neutral position.

ASEAN's attitude is that it hopes that Russia and Ukraine can solve the problem through political means and negotiations, rather than "fire".