The forces of the "Happy Yemen Brigades", backed by the forces of the Fifth Military Region, launched a military operation at dawn today to complete the liberation of the Haradh district in Hajjah governorate in full, according to field sources, confirming the start of storming the city center of Haradh from several sides, after the rejection of the besieged Houthi terrorist militia. 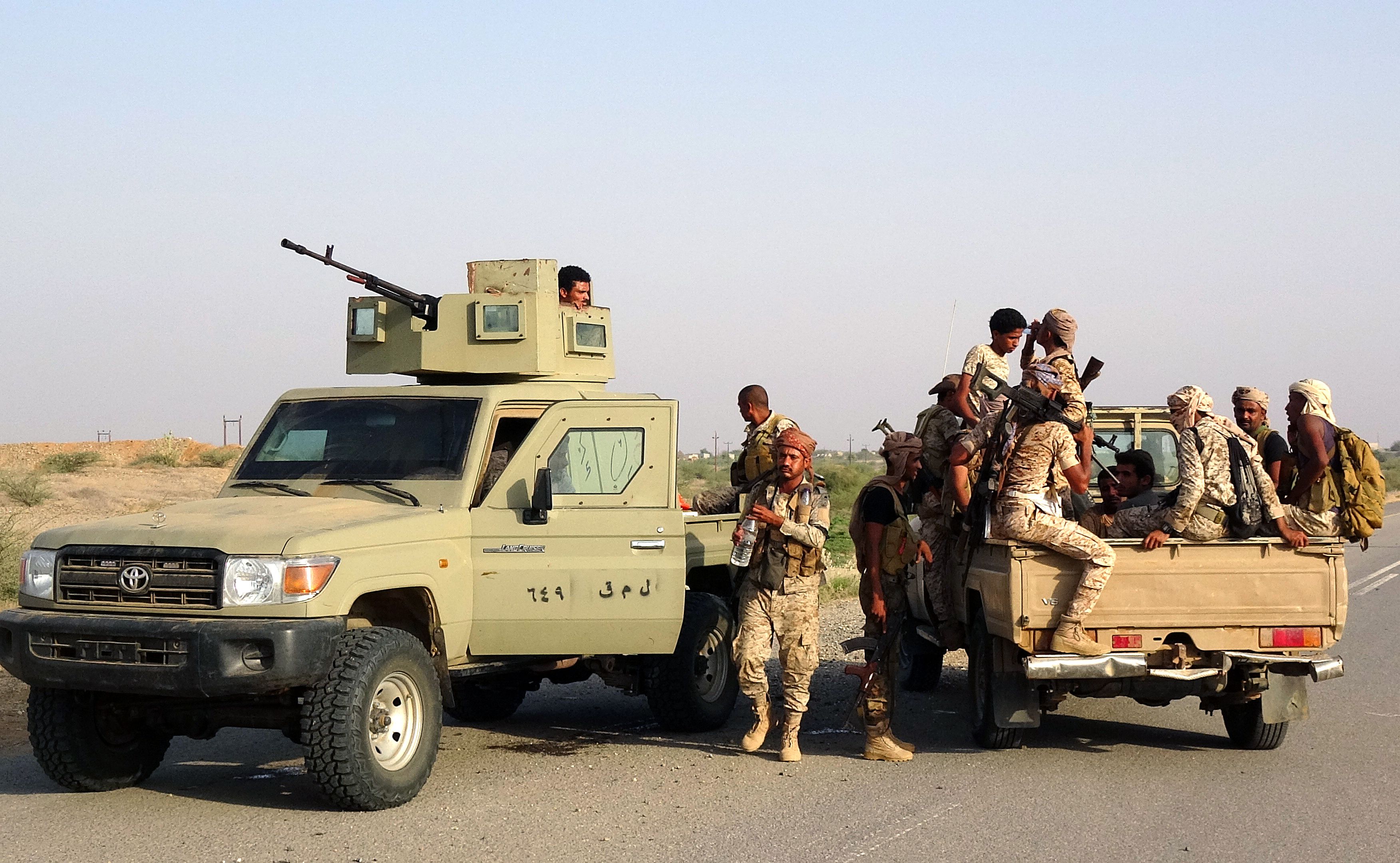 The forces of the "Happy Yemen Brigades", backed by the forces of the Fifth Military Region, launched a military operation at dawn today to complete the liberation of the Haradh district in Hajjah governorate in full, according to field sources, confirming the start of storming the city center of Haradh from several sides, after the Houthi terrorist militia elements trapped in it refused to surrender.

The sources stated that the forces, backed by coalition fighters and helicopters, advanced from the fronts north, east, and south of the city of Haradh, where members of the terrorist Houthi militia are holed up, including foreign leaders and experts.

The sources confirmed that the forces, which received reinforcements and new weapons, were able to liberate the areas of Umm Al-Hassam, Umm Al-Tarab, Al-Hamra, Hasm, Al-Gharza and Al-Qaim, from the northern side of the city, while advancing through the eastern axis and liberating and purifying the areas of Al-Kharsh, Al-Mahdira, and Al-Qafl, to the north of the city. The Hawthala area, as well as the Al-Rad and Al-Shabbatiyah areas from the southern side.

According to the sources, the Arab coalition helicopters have intensively participated in the ongoing mopping-up operations in Haradh during the past 24 hours, which has greatly tightened the noose on the besieged elements in the heart of the city of Haradh, and prevented them from moving between buildings, noting that 30 Houthis were killed in the coalition raids that targeted Houthi reinforcements were trying to infiltrate from the village of Marsa', east of Haradh.

According to the sources, all supply lines towards the heart of the city were cut off, while units of the "Happy Yemen Brigades" backed by the forces of the Fifth Military District, began moving towards the districts of Mastaba and Bakil al-Mir to cut off the Houthi supply routes coming from Hajjah, and also advanced towards the fronts of Midi and Abs, Al-Zahra and Al-Luhia districts, north of Hodeidah, to cut off Houthi supplies from Hodeidah.

Field sources had confirmed the killing of nearly 200 Houthis, including six snipers, during operations to purify the city of Haradh and repel attempts to break the siege on them by Houthi reinforcements that are sent to carry out the mission, located in the crematoriums of death.

The sources pointed out that trenches, tunnels, mines and snipers over high buildings in the city of Haradh, constitute obstacles to the liberation operations for the rest of the besieged city.

In Saada, the forces of the "Happy Yemen Brigades" made progress described as qualitative by the Arab coalition, which confirmed the launch of a military operation in Saada, noting that forces from the "Happy Yemen Brigades" were equipped and supported in coordination with the Yemeni defense, to start a military operation in Saada.

And field sources in the governorate confirmed to Emirates Today that the operations of the “Happy Yemen Brigades” continued for the second day in a row in the Baqim district axis, and the Malahit axis in the Al-Zaher district, pointing to the killing of 20 Houthis and wounding others, as well as the destruction of Houthi combat mechanisms in Baqim. .

The sources indicated that, during the past few hours, the coalition warplanes launched intensive raids on Houthi sites, targets and mechanisms in the districts of “Baqim, Kitaf and Dahyan, where a weapons store in Kitaf, a communications system and a Houthi command and control operation room were destroyed in a cave in Dahyan.

The sources stated that the militias suffered great confusion and confusion with the launch of a military operation in its stronghold of President Saada, and pushed leaders from the first row to the province, including Muhammad Ali al-Houthi, a member of the so-called Supreme Political Council, and the Houthi leader Abdullah Aida al-Razami, nicknamed "Abu Yahya".

The sources confirmed that the militias cut off all roads leading to the city of Saada, and declared a state of alert, while Houthi reinforcements flocked from Marib, Al-Jawf and Hajjah to prevent any advances by the coalition-backed forces towards new areas in the stronghold of Abdul-Malik Al-Houthi.

She explained that one of the tasks of the coalition's military operation in Saada was to reach the vicinity of Maran, the stronghold of Abdul-Malik al-Houthi, in the district of Haidan.

In Marib, government forces and tribes thwarted a Houthi attack on the al-Kasara front in the Serwah district, west of the governorate, inflicting 12 losses on the Houthis, including the Houthi leader Abu Ahmed al-Mutawakil, and destroying an armored vehicle and three Houthi vehicles.

For its part, coalition fighters destroyed large Houthi reinforcements in the center of Serwah district, after arriving from Khawlan Sanaa.

In Al-Jawf, coalition warplanes demolished a Houthi weapons depot containing ballistic missiles in the “Al-Saqiya” area of ​​the Al-Masloub district, west of the province.

Meanwhile, local sources in Al-Jawf confirmed the arrival of a shipment of Houthi weapons that were smuggled from Sanaa airport, including marches and ballistic missiles, and were stored in the Al-Ghail district.

In Sana’a, informed sources confirmed the disappearance of the militia leaders from the city on the impact of the Arab coalition’s deadline for civilians to evacuate civilian sites used in the recent attacks towards Abha Airport in the south of the Kingdom, set at 72 hours, noting that a number of them were transferred to foreign embassies, while prominent leaders were transferred to rural areas. .

Yesterday evening, the militias had failed to launch a ballistic missile from Wadi Harib Nehm, northeast of Sanaa, which led to a huge explosion in the area, killing and wounding a number of Houthis, including two leaders, Ali Rassam, nicknamed "Abu Hezbollah", and Hamid Al-Razami, alias. Abu Abdul Malik”, along with a foreign expert.

On the other hand, tribal sources in the Arhab district, north of Sanaa, revealed that 46 Houthis, including officers, were killed, and 65 others were injured, in clashes that took place in the Samaa camp in the district, against the background of the recent raids by coalition fighters on the camp, after exchanging accusations of giving coordinates to the coalition.

The sources indicated that a meeting was held at the house of one of the Houthi leaders in Sanaa, to find out the effects of those clashes, especially since a number of tribes are demanding revenge for their dead, where a tribal peace and settlements were reached in which millions of riyals, weapons and cars were paid to a number of families of the victims, from The tribes, while the rest of the dead were kept secret.