"Expo Dubai" motivates generations: Our ambition is beyond Earth's orbit

Expo 2020 Dubai provides an enchanting journey, during which visitors are briefed on the achievements of space missions and future explorations, which will reshape the human relationship with outer space, through a group of pavilions of the countries participating in the exhibition. 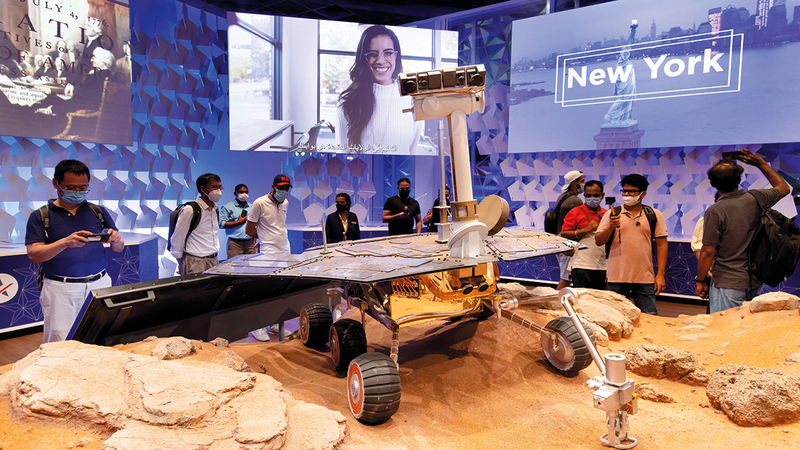 The "Space Swimming" program introduces visitors to the achievements between planets

"Expo Dubai" motivates generations: Our ambition is beyond Earth's orbit

Expo 2020 Dubai provides an enchanting journey, during which visitors are briefed on the achievements of space missions and future explorations, which will reshape the human relationship with outer space, through a group of pavilions of the countries participating in the exhibition.

With the aim of motivating generations to explore space and conquer the challenges facing this sector, Expo 2020 Dubai will launch a series of activities inspired by swimming in space, which provide the ideal way to explore this important sector, as yesterday marked the passing of a whole year since the success of «Expo 2020 Dubai». The Hope Probe, launched by the UAE in space, reached the orbit of Mars, in the first interplanetary mission to be launched in our Arab world with the motive of motivating and inspiring Arab youth, especially since 80% of the scientific team based on the program are women, as well as the formation of A crew of Emirati astronauts, including Noura Al Matrooshi, the first Arab female astronaut.

The "Space Swimming" journey, designed by Expo Dubai, celebrates this bold Emirati mission, in addition to the achievements of other countries in this vital sector, such as Canada, France, India and New Zealand, and aims to inspire everyone to explore the potential of outer space.

Using the means of technology and immersive technologies, the "Space Swimming" trip will honor the exploits of nations, and tell us how these missions have contributed to improving life on the planet, and facing many challenges, including the phenomena of climate change and environmental pollution.

The trip starts from the Australia Pavilion, where you can explore the techniques used by the indigenous people, to roam at night, relying on the stars, and their use of modern technologies.

Guests of the exhibition will have a rare opportunity to see how the mission’s path is controlled by the ambitious Emirati space program, and they will be surprised by the achievements of the Hope Mission to Mars, which is being showcased by “Alef Pavilion” in the Mobility Area, in celebration of the UAE joining the elite club of countries that have traveled to The space.

France is one of the first countries to pioneer space exploration.

Therefore, its pavilion invites visitors to embark on a journey into outer space, discovering how the French Space Agency pushes borders, and its contributions to support collective knowledge to explore the secrets of space.

Heading toward the New Zealand pavilion, the flight participants will be able to meet the space technology manufacturer, Rocket Lab, to learn how to launch satellites into low Earth orbit.

India is among the countries that are making amazing strides in space exploration, and the India pavilion will showcase its space program and its applications in the fields of health, defense and natural resource management.

While the Forum for the Future, in the Kazakhstan pavilion, designed in the form of a spaceship, will discuss pioneering technologies and modern scientific developments.

In the United States of America pavilion, the visitor will be amazed when he sees a model of the SpaceX rocket, which is 43 meters high, and pieces of rocks brought from the moon and Mars rovers or "Mars rover" can also be seen.

By wandering about in cute adventures, children can learn about cute adventures in space, by ascending to the planet Mars, through the fun nets in a cute playground and “The Space City”.

The Norway pavilion will show how the maritime and aerospace industries are integrated through an interactive journey, starting from the bottom of the sea, passing through the ocean and into space.

Inspired by the project of the late Professor Stephen Hawking, the UK Pavilion is highlighting artificial intelligence and the space sector, by focusing on the future of space travel.

As a continuation of the trip, by passing through the Luxembourg Pavilion, one can explore the pioneering project launched by the country in the field of satellite communications for space exploration.

Expo 2020 Dubai organized a week dedicated to the space sector, in cooperation with the Emirates Space Agency and the Mohammed bin Rashid Space Center, last October, one of the 10 thematic weeks organized by the international event during its holding, within the framework of the Human and Planet Earth programme.

Space Week featured a range of content, expert discussions, and other events that explored the advantages and benefits of exploring beyond Earth's orbit and the solutions and challenges of this mission.

• 80% of the scientific team based on the Hope Probe are women.

• The UAE has joined the elite club of countries that have traveled to space.

• Norway reviews how the maritime and aerospace industries are integrated.