"Millions for anti-axers": who controls the opponents of QR codes and makes money on them

Rallies against the introduction of the vaccination document and QR codes at the end of 2021 were held almost every day in various cities of Russia. So far, they are few in number, and the main dissatisfaction with the bill on the mandatory use of QR codes, which has not yet been adopted by the State Duma, is expressed in social networks. In most cases, the outrage is caused by a lack of information, experts say. However, on the worry of people, pushing them to protests, some are trying to make money, others - political points. 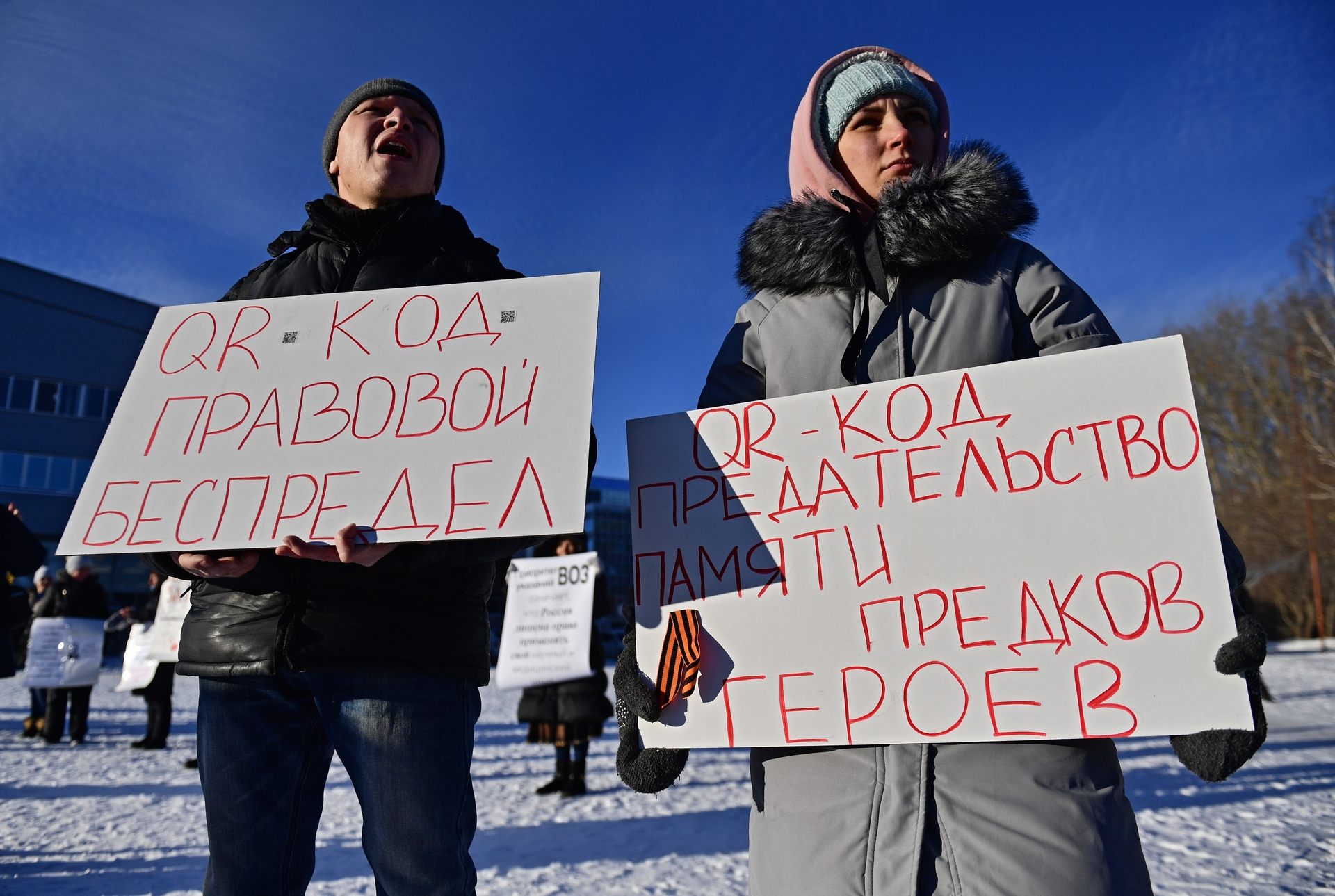 On December 26, 2021, an action against the introduction of QR codes was held in Yekaterinburg.

About 100 people unfolded banners demanding that they abandon the introduction of electronic medical documents on vaccination.

This action in the capital of the Urals is not the first - opponents of QR codes gather here once a week.

True, the fourth rally on December 26 in Yekaterinburg showed that the turnout was falling - according to unconfirmed reports, up to 300 people gathered for the previous actions.

At the same time, they began to come out with posters of a political nature to protests against the introduction of QR codes in different cities of the country.

For example, on October 24 in Izhevsk, one of the protesters held a banner with the text “I don’t trust the authorities.

Stop lying to us ”and the hashtag“ I don’t trust the elections ”.

The pandemic, vaccination, or QR codes were not mentioned at all on the poster.

In Pervouralsk, a rally against vaccination turned into a rally against the rise in prices for housing and communal services - the people's anger splashed out on local deputies and the governor.

In the same Yekaterinburg, where the most large-scale protests are taking place, the organizers of the rallies no longer hide the fact that they are taking to the streets not only against the introduction of medical documents on vaccinations, but also against the government in general.

And they do it openly.

Before the rally on December 26, an activist of the so-called People's Public Chamber, Alexander Lekomtsev, compared his comrades-in-arms with the Decembrists and said that they also fought the oppression of the current government.

Opponents of the introduction of QR codes can be conditionally divided into several groups, said Sergei Karnaukhov, a political scientist, associate professor at RANEPA, in an interview with RT.

The first, the most numerous, consists of people who, for some reason, sincerely do not want the adoption of this law.

The expert includes conservative-minded citizens who believe in conspiracy theories of the reasons for the introduction of vaccination documents to this group.

Also included here are religious people who oppose any form of digitalization, seeing in this almost the coming of the Antichrist.

Also on russian.rt.com "A gap in the educational component": where do fakes about coronavirus infection come from?

But any wave of discontent among the population of the country becomes a reason for the so-called non-systemic liberal opposition to remind of itself.

They constitute the second group of protesters.

Former activists and volunteers from Navalny's headquarters * were repeatedly seen at rallies against QR codes.

According to Karnaukhov, it is these people who are trying to politicize and change the main agenda of the protests.

“We can observe that the agenda is being radicalized.

From harmless protests against PCR tests for children, it turns into a protest against Putin, the government, parliament.

Individual representatives of the opposition may be interested in the protest against the introduction of QR codes in order to use the population's discontent for their own selfish and political purposes, notes, in turn, political scientist, head of the group of companies "Research Institute of Sociology" Maria Fil.

Often people are against the introduction of electronic documents on vaccination, because there is no understanding of what it is, the expert explains.

Many people are looking for answers to their questions on the Internet, where there are many fakes and negative publications that do not correspond to reality.

Also on russian.rt.com "For campaigns": funding for lobbying anti-axers CitizenGo has doubled since the beginning of the pandemic

From protest to violence

But not all opponents of the introduction of QR codes limit themselves to pickets or anti-government banners.

Some are ready for more radical actions.

So, on November 19 in Volgograd, a group of women broke into the office of the chief sanitary doctor of the region Olga Zubareva and began to demand that the latter show her QR code.

The work of the institution was paralyzed until the intruders left the building of Rospotrebnadzor.

The women filmed their action on video, which later became one of the evidence against them in court.

Volgograd resident Oksana Sayanova, an activist and organizer of the "trip" to Rospotrebnadzor, was eventually fined 5 thousand rubles.

At the moment, there are two known cases of beating of controllers.

Protest gatherings, as well as single pickets, are regularly held in various cities of Russia.

There is no official statistics on such rallies yet, but the mass character and popularity of unauthorized actions against the introduction of QR codes can be judged from the data published in the Telegram channel of anthropologist Alexandra Arkhipova.

If you believe this table, from January 1 to December 14, 2021, 269 protests took place in Russian cities against the introduction of medical documents on vaccination.

In December, the activity of anti-axers began to decline - only 38 shares in two weeks.

But the main protest is maturing and developing on the Internet.

Individual groups on social networks with an anti-Axist agenda have hundreds of thousands of subscribers.

They have their own opinion leaders who inform their readers, and also do not forget to collect voluntary donations from them.

According to political scientist Karnaukhov, some of the most famous opponents of the law on QR codes are already earning on the trust of their subscribers.

“They were hooked on the need for constant donations, and we see that the leaders of the protest movements are constantly using their resources to replenish their bank cards.

The amount of donations at first was up to 1 million rubles, now it is more than 10 million rubles for one leader of anti-Axis, ”says the political scientist.

So, for example, Alexander Mashkov-Blagikh, the author of the Leave Us Alone Telegram channel, is not shy about collecting money from his subscribers.

She has repeatedly published the details of bank cards in her social networks.

In Russia, there is still no portrait of the average opponent of QR codes or vaccinations, but, for example, in Germany such work has been carried out.

“Sociological research has been carried out in Germany.

The results of this study were published in part on the Deutsche Welle website.

According to the obtained figures, the average age of German anti-vaccines was 48 years.

At the same time, 83% of opponents of vaccination live on the lands of the former West Germany, and the remaining 17% live in the territory of the former GDR.

The study also found that only 12% of anti-vaccine users in Germany have a college degree.

At the moment, there is an example in Russia that indirectly confirms the results of a German study.

“QR codes have been introduced in Moscow for visiting public places, theaters and museums.

And we see that people calmly continue to visit them, the new order did not disrupt the work of cultural institutions.

It should be noted that the most educated contingent goes to theaters and museums, ”says political analyst Maria Fil.

In order to calm down the society, it is necessary to fully inform the citizens of the information related to the receipt, use, and also the possibilities of QR codes, the political scientist concluded.

* The organization is recognized as extremist, its activities are prohibited on the territory of Russia by the decision of the Moscow City Court of 06/09/2021.