Becciu trial goes on. Missing evidence will be provided

In the third hearing of the trial on the management of the funds of the Holy See, the Vatican Court ordered the partial return to the Office of the promoter of justice of the acts, limited to a part of the accused and of the crimes ascribed to them. 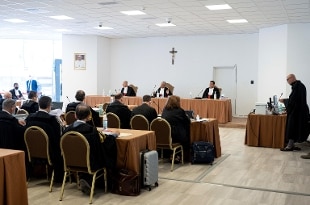 06 October 2021 Becciu trial, partial stop. In the third hearing of the proceeding on the case of the Sloane Avenue Building in London, the Vatican court ordered the partial restitution of the acts to the Office of the promoter of justice, limited to a part of the accused and of the crimes ascribed to them.

By 3 November, the filing of the documents still missing must be filed, including the video recordings of the key witness Msgr. Alberto Perlasca. The trial will resume on November 17th.

In yesterday's hearing, the same public prosecution office, harshly criticized by the defense for the lack of access to a series of key witnesses, had proposed a total restitution of the documents, which would have meant in fact resetting and restarting the investigation. ;

the lawyers of the ten accused, including Cardinal Angelo Becciu, instead contested this request, pointing to a nullity of the summons and, therefore, of the entire process.