World Qualifiers-2022: the Blues in Ukraine to hunt ghosts and restart the machine - France 24

World Qualifiers-2022: the Blues in Ukraine to hunt ghosts and restart the machine Kiev (AFP) Affected by the injuries and the package of Kylian Mbappé, stranded for victories and not rid of the ghosts of the Euro, the France team travels without certainty to Ukraine, where its main opponent awaits qualifying for the World-2022, Saturday (8:45 p.m.) at the Olympic Stadium in Kiev. The dynamics of the Blues are not that of a world champion: with four games in a row without a wi 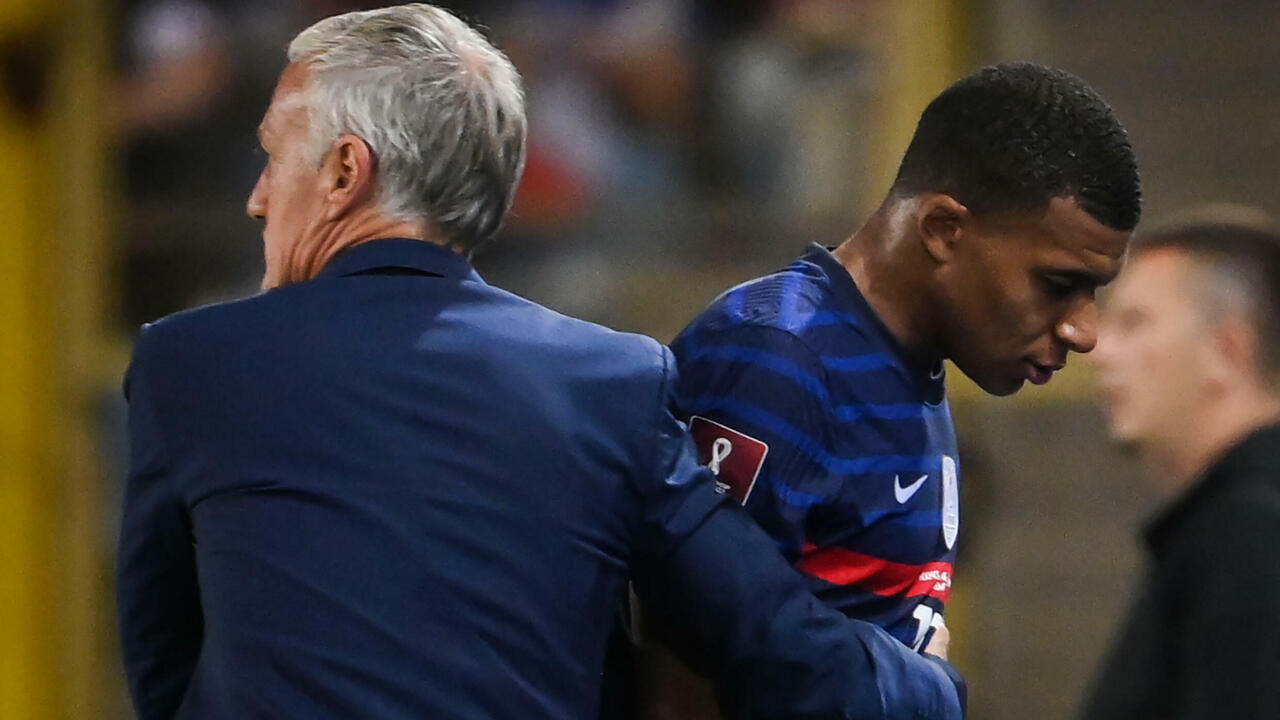 Affected by the injuries and the package of Kylian Mbappé, stranded for victories and not rid of the ghosts of the Euro, the France team travels without certainty to Ukraine, where its main opponent awaits qualifying for the World-2022, Saturday (8:45 p.m.) at the Olympic Stadium in Kiev.

The dynamics of the Blues are not that of a world champion: with four games in a row without a win, Didier Deschamps' men are in their worst series since 2013.

The last exit of the Tricolores, Wednesday in Strasbourg against Bosnia-Herzegovina (1-1), was to be that of redemption after the early elimination in the round of 16 of the Euro against Switzerland (3-3, 5-4 tab ).

It only reinforced the doubts that drive the selection.

These are first of all physical, with the absence of many executives (Lucas Hernandez, Benjamin Pavard, N'Golo Kanté, Corentin Tolisso) and the package announced Thursday from Mbappé, hit a calf and made available to Paris SG.

Presentation of the match between Ukraine and France counting for the qualifiers for the 2022 World Cup, September 4, 2021 in Kiev AFP

But they are above all sporty, with the opening scoring conceded as in the three previous matches, a feverish defense like the exclusion of Jules Koundé and an attacking trio Griezmann / Benzema / Mbappé operating intermittently despite seven consecutive tenures. .

"Whatever we say, there is a lot at stake on the field. We must not get in trouble. It is our responsibility to us, all the players, to do the job", assumed the captain. Hugo Lloris Friday.

The world champions still have a four-point lead over the Ukrainians in these mid-term qualifiers, and Didier Deschamps ensures that he has "no doubt" about the involvement of his entire group in defensive tasks.

Bosnia and Herzegovina striker Edin Dzeko opens the scoring against France in the qualifying match for the 2022 World Cup in Qatar on September 1, 2021 in Strasbourg FRANCK FIFE AFP

But since the convincing victory in Germany (1-0) at the opening of the Euro, the French have never regained the solidity that had been their strength until then.

The trip to Kiev comes at the right time to reconnect with the right recipe: the Ukrainians, quarter-finalists at the Euro, had already disturbed the French team in March during the first leg, concluded in another draw (1-1).

The majestic Olympic stadium and its 70,000 seats, located in the city center of Kiev, will remind the oldest members of the workforce of very bad times (Karim Benzema, Hugo Lloris, Paul Pogba).

The joy of Ukrainian striker Andriy Yarmolenko (c), after scoring the 2nd goal against France, during the first leg of the 2014 World Cup qualifiers in Brazil, November 15, 2013 in Kiev FRANCK FIFE AFP / Archives

The last visit of the Blues dates back to November 15, 2013 in the first leg of the 2014 World Cup, and "it was really not a good memory" according to Deschamps, with a catastrophic defeat (2-0) which could have cost France its qualification, without the historic turnaround of the Stade de France (3-0) a few days later.

Almost a decade later, the gauge has been reduced to 45,000 spectators due to health restrictions and French fans will not be on the trip, UEFA having blocked the movements of fans outside.

On the lawn, the balance of power has also changed a lot: Ukraine is going through a period of reconstruction after the departure this summer of the legendary Andriy Shevchenko, coach for five years.

The unknown Oleksandr Petrakov, his replacement, also missed his first with a draw in Kazakhstan (2-2) and must face the suspension of one of his greatest talents, Oleksandr Zinchenko, player of Manchester on Saturday. City.

On the French side, Deschamps must recompose his line of attack in the absence of Mbappé.

Kingsley Coman and Anthony Martial are in ambush, like the neo-international Moussa Diaby.

France midfielder Adrian Rabiot during a timeout during the Euro 2020 match against Portugal on June 23, 2021 in Budapest Darko Bandic POOL / AFP / Archives

There are more uncertainties in the middle and in defense.

Adrien Rabiot, recalled to the group after resuming competition faster than expected in club, seems favorite for a tenure alongside Paul Pogba.

Thomas Lemar, at fault on Wednesday on the Bosnian goal, was satisfied with a jogging Friday on the eve of the match.

What gives hope for a second selection for Aurélien Tchouaméni, who came into play in Strasbourg, or Jordan Veretout, holder at the Meinau.

To the left of the defense, Theo Hernandez dreams of a first selection but it will be necessary to dislodge Lucas Digne.

As for the right flank, it suffers from the package of Pavard and the suspension of Koundé: Léo Dubois and the newcomer Nordi Mukiele will compete for a starting place.